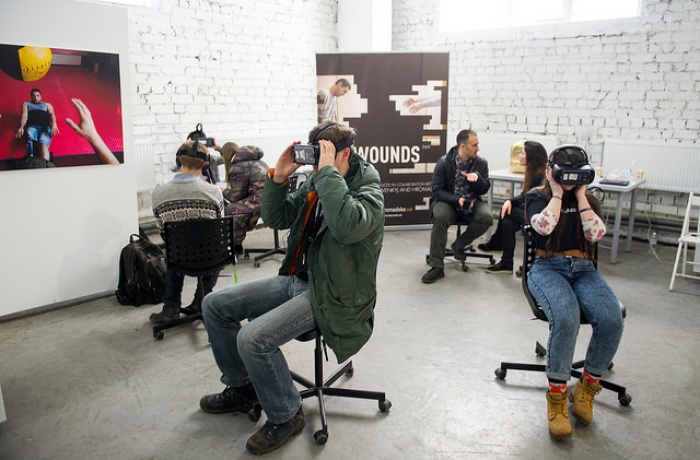 Speaking aloud about human rights and freedoms, creating a social dialogue between the authorities and the public, revealing violations that at first glance seem local, small and untimely — all of this is initiated every year with the annual human rights programme at the DOCUDAYS UA festival.

The concept behind this year’s festival is ‘Equal Equality’. Consequently, all the events will be dedicated to counteracting various forms of discrimination at different levels. Together with the audience and participants of the festival, we will try to find out which form of inequality or discrimination is most important for contemporary Ukraine? What rights and freedoms are most commonly being violated now?

According to the annual report of the Ukrainian Helsinki Human Rights Union, the situation with respect to human rights changed little during previous years but has been drastically different since 2014. After the beginning of the armed conflict and the occupation of Donbas and Crimea, the main indicators of systemic and massive human rights violations include disappearances, assassinations, torture of captives, hostage-taking, and ideologically motivated violence. Yevhen Zakharov, the director of the Kharkiv Human Rights Group, regards these as the main factors which prevent the country from moving towards ‘progress in the spirit of the ideas of the Revolution of Dignity’.

Thus, the RIGHTS NOW! the programme will be dedicated, first and foremost, to human rights violations caused by the armed conflict. For instance, the programme includes a meeting with volunteer searchers from the ‘Black Tulip’ humanitarian mission, who took on the important role of searching for the bodies of soldiers who died in the ATO area and returning them to their close ones (screening of The Chronicles of ‘Black Tulip’ and discussion on 28 March at 2.30 Cinema). Project ‘Wounds 360°’ is an uninterrupted screening of 360° short films that tell the stories of severely wounded soldiers. The VR glasses create a unique effect of immersion into the characters’ lives (every day from 24 to 29 March). A screening and discussion of short films about contemporary lives in occupied Crimea will take place with the participation of Ilmi Umerov, a liberated Crimean political prisoner. The screenings will include the films Crimea. Unconquered, Crimea. The Winners Take It All, Mykola Semena. Forbidden Thoughts, Unswerving Balukh. The Sentence, and Forbidden Love: The Life of the LGBT Community in Crimea (25 March at 6 p.m.).

A separate event is devoted to the history of well-known Ukrainian human rights activists who, despite the risks and dangers, have not left their work. Some work in the field of protection of the rights of people with disabilities, others monitor the rights of prisoners and Ukrainians persecuted in Crimea, and some have devoted themselves to the study of LGBTQI-people and women’s rights, as well as the prosecution of those responsible for the murders on the Maidan. (discussion #ChoosingAction, 28 March at 5 p.m.).

The situation with children’s rights has deteriorated during recent years. This issue has not even been included in the list of state policy priorities, claim the experts from the Children’s Rights in Ukraine Coalition. In the UHHRU annual report, experts criticised the school system for its inability to monitor the observance of children’s rights at school. In particular, the report stated that “schools are unable to solve the problems of children’s rights; they use programmes that are far from a human rights-based approach and do not fulfill the function of raising children in the spirit of human rights and democratic citizenship.”

In this context, the event of the human rights programme RIGHTS NOW!, in cooperation with the Educational Experiment NGO, seems rather unique. It is a round table which involves children, teachers, and parents. In this circle, a discussion will be held on whether the state is ready to give children the right to choose the format and speed of their studies. The event will be moderated by children who have chosen homeschooling or distance schooling. (27 March, 5 p.m.).

On 24 March, with the support of the International Research and Exchanges Board (IREX), there will be simultaneous events for children, adolescents, and adults, which will be useful for the whole family. The events are dedicated to various topics: from talking about gender with children to ways to make friendships with other kids. The adolescents will have a chance to speak openly about their first dates and the risks of relationships with their carers. The adults will be taught to detect and counteract bullying among children and to prevent violence. Another important event related to the children’s rights will take place on 29 March. During the discussion ‘Children’s Rights in Ukrainian Media Space’, the parliamentary deputies and producers of leading TV shows will discuss the legislation changes, aimed at protecting children’s rights in the media. The pretext for this event was a scandalous talk show on one TV channel where the pregnancy of a 12-year-old girl was discussed in brutal details, and the anchor interrogated her about her intimate relationships. (29 March at 4 p.m.).

The situation concerning discrimination against the rights of people with disabilities remains the same. The only reassuring change recorded by human rights activists took place in 2016; this was a series of amendments to the law on ratifying the Convention on the Rights of Persons with Disabilities. The term ‘invalid’ was removed from the text of the international document and replaced with ‘person with disabilities’. At the RIGHTS NOW! venues, there will be discussions on how to make the lives of the persons with disabilities decent and comfortable. In addition, for the first time in Ukraine, the film festival will produce audio description for several films in the competition, so visually impaired people will be able to watch the films at the Zhovten and Ukraine Сinemas together with other viewers and vote for their favorites. There will also be a master class for directors on the production of audio descriptions (concise descriptions of the visual part of the film that help visually impaired people to understand the plot of the movie). (27 March, 12 p.m., in the Classic Hall at the Zhovten Cinema).

This year the Ukrainian Helsinki Human Rights Union has established a special prize for Ukrainian documentaries “For the best coverage of the equality issue”. The special jury will choose the winner among the Ukrainian films of the festival’s competition programme. The money for the prize will be collected at the auction that will take place after the presentation of the project Dumaidan 2017: Let’s gather around the Tent of Understanding. The auction lots are breakfasts-conversations with famous Ukrainians, intellectuals, philosophers and human rights advocates (Yevhen Bystrytskyi, Yosyf Zisels, Oleksandr Pavlichenko), and unique Tent of Understanding. This Tent was created in 2017 by the project participants in different Ukrainian cities, who sewed it together from colorful patches during masterclasses of the topic of understanding. The auction will take place on 25 March at 1.30 p.m. in IZONE Creative Space.

Admission to all these events is free. See you at the IZONE Creative Space at 8, Naberezhno-Lugova street, and at the Zhovten and Ukraine Cinemas.