Moving through the corridors and bowels of an enormous and disorienting structure, the camera takes the viewer on a descent down to a dehumanized place of physical labor and intense hardship; a gigantic textile factory in Gujarat, India. In his mind-provoking yet intimate portrayal, director Rahul Jain observes the life of the workers, the suffering and the environment they can hardly escape from. With strong visual language, memorable images and carefully selected interviews with the workers themselves, Jain tells a story of inequality, oppression and the huge divide between rich, poor and the perspectives of both. 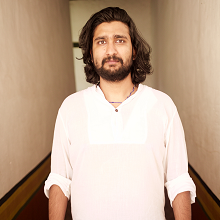 Rahul Jain is from New Delhi and grew up grew up in the Himalayas. He recently graduated with a Bachelor’s degree in Fine Arts in Film and Video from the California Institute of the Arts, and is presently pursuing a Writing M.A in Aesthetics and Politics. He is interested in distance, otherness and the everyday. Machines is Rahul’s debut production.