Oleksandr Balahura: “We are watching both a film and a theatrical play at once” 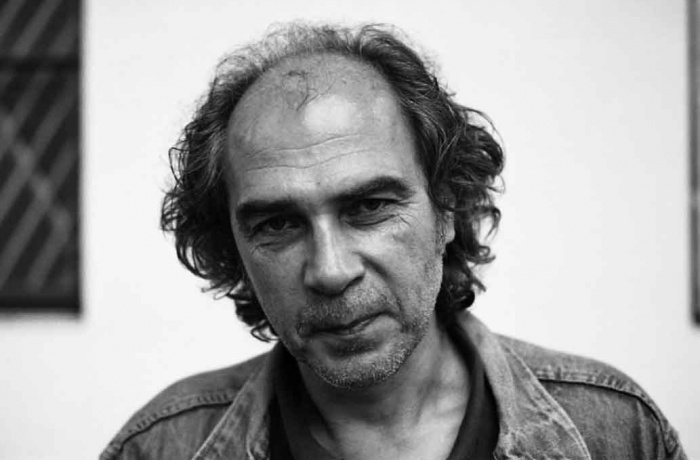 At the beginning of December 2012, the Kinopanorama film theater in Kyiv premiered the film Life Span of the Object in Frame by the documentary director Oleksandr Blahura. The director has defined his film genre as “an author’s experimental documentary”. His idea was to depict the changes that our country Ukraine and its people have had to live through over the last fifteen to twenty years, with the help of photographs, as well as his own reflections and feelings. We met Oleksandr Balahura at the same film theater, shortly after the film’s premiere, at a time when, as the director said himself, he still couldn’t “separate himself from the film”. He shared his impressions of working on the film, for which he’d left his home in Genoa and temporarily moved to Kyiv. We also discussed his new documentary project about life in a Roma camp.

How did the idea for Life Span of the Object in Frame come about? You wrote the screenplay in cooperation with Svitlana Zinovyeva. How did this work out, considering that this project was very personal for you?

Three years ago Svitlana Zinovyeva and I had the idea of making a film connected with a time, photographs, memories. Later, another story was added – about a film that was not shot, a film which there hadn’t been any time before.

We turned to pictures. This was a very practical decision, as photographers often capture moments for which filmmakers would never have enough film. I showed my notes to Svitlana; at times I was afraid to share some things, I hid ideas between the lines. There were a lot of pictures which I felt were very close to my heart, especially the works of Yevhen Pavlov.

You are trying to reflect your state in these pictures, to restore that time. You start thinking: “Why did I come by these pictures, not someone else?” It wasn’t me who chose the pictures, they came to me, like Pavlov’s works, or the picture by Sasha Chekmenyov, ‘She Who Sleeps in the Market’, which added a lot to the film. I liked it at first sight, but I pictured this girl differently. Who was she for me? It was very strange to see her body sleeping in the middle of the market, as if she was in another universe. I wanted to find out more about her life. Maybe she was just a girl who had come to sell her products in the market and fallen asleep as she grew tired? However, her real story, what happened to her in reality – turned out to be way more intense than anything I could imagine. All the rest is manipulations, editing.

Many people who have seen the film tend to think that it would be better to end it after the scene in the sea – at the father’s letter. And yet it feels that the film has several endings, one following after another. What stands behind this choice?

It would have been wrong to end with this letter. We are watching both a film and a theatrical play at once. We keep it going, and then end it with fireworks. We are talking about serious things, but it is one thing to ponder over these things on your own, and quite another to present them in a film. In a film, all of it is presented sort of playfully, but in such a manner that the viewer starts thinking about serious topics. That's why finishing with fireworks is just the right ending for a show at the fair.

So you deliberately enclose your story in parentheses?

I wanted to stay away from the extreme pathos or the attitude felt when a person comes out and starts speaking about serious things. But the ‘high style’ does always allow for a little room to play with it, when you can consciously ‘take it down’ a bit. All the film’s characters speak about things that are very important to them, yet they do so in an explicitly playful form.

You've made several films about your own unfilmed or unfinished motion pictures. Are you procrastinating, or is it just that you have no passion to film at the moment, or is it just a lack of financial opportunity?

The title of the first film was Pausa Italiana (a film about waiting for a film). This was a real pause, when we moved to another place and I had to ‘pause’ filming for 4–5 years. I had this state, you know, when you cannot but film. I had this inner tension, rather strong, but it didn’t burst outside. There was also Butterfly Wings (a film about an unfinished film). A film about us being young, going to film theaters, my mother gave me a film camera. And each of us was filming his own film. It’s hard to say what exactly we were filming back then … which is probably still true today…

You are a character in many of your own films. What kind of person is your character? Which viewpoint are you speaking from?

Probably from the standpoint of my generation… Maybe from the part of it which I belong to (yes, there is such a part), and which I can vouch for, in any case. A lot of things have happened, years passed, various events took place, both internally and externally. And then one day the moment comes when you just have to start figuring it out, otherwise it’s just impossible to go on breathing.

In your film and its screenplay there was a line about disintegration of the Country, meaning the USSR. Was there really anything to disintegrate and something to lose?

Of course there was – in all the meanings of this word. All the values that our generation had based our lives on – trust, honesty – disappeared. That society, no matter how we criticize it, had decent, talented people, who had a chance to develop their talents – painters, film directors, writers… In the place of the previous authorities appeared misfits and bastards, who just wanted to seize money. Inequality came about, society didn’t become any more fair, just more cynical. I didn’t move to Italy for financial gain. I didn’t want to cooperate with them. I left with a feeling of inner degradation within the great mass of people, whom I stopped expecting anything from. However now, a new generation has grown up. In the midst of these twenty-year-olds I am beginning to hear an interesting and sincere voice. I won’t speak for everyone, but I have been lucky to meet such people.

Tell us about your new documentary project, where you describe a Roma camp. It also started twenty years ago.

It didn’t exactly start twenty years ago… We were just visiting a camp and filming those people, whose life was very hard. We didn’t get to know them, we didn't even know their names. For instance, this boy whom we filmed accidentally… He was singing and I had no clue what he was singing about. But then, twenty years after, we found this boy again. And he told us how he had been living all this time.