Alyona Polunina: “I don’t settle my accounts through the medium of art” 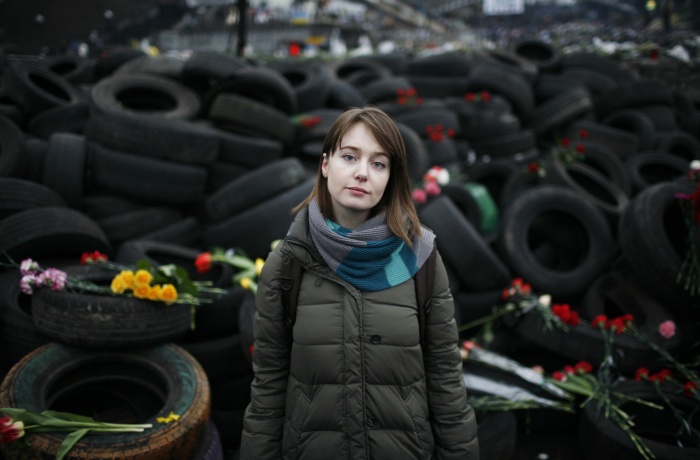 Docudays UA has been friends with the Russian filmmaker Alyona Polunina since 2009, when her film The Revolution That Wasn’t won the Grand Prix. This time she will present her new film Nepal Forever in DOCU/BEST, the non-competition programme for winners of international film festivals. It’s about two funny Russian Leninists, who went to Nepal to reconcile the local communist parties.

The screening of Nepal Forever will close the DOCU/BEST program on March 27 at 3 pm in Red Hall of Cinema House.

This interview was recorded at the end of February, when Alyona came to Kyiv and the Maidan. Of course, that was the subject we began our conversation with...

I arrived at midnight on 21 February – no photo or video can convey the atmosphere that I saw. I thought it would have been very cynical to sit in Moscow and watch live broadcasts.

Didn’t you feel a professional desire to film the Maidan?

I don’t want to be a cine-tourist. I’m not so immersed in the context of political life in Ukraine – at some point I let it out of my sight. Maybe because when Yanukovych came to power, I was angry.

I decided not to shoot a single frame. I am a foreigner here, and I did not want to exploit the situation with the blood of others, with this historic event. If I had protagonists, and I knew what I wanted to make a film about, it’s likely that I would have come with my camera. But I needed to make this trip purely as a human.

What was your relationship to the Maidan in regard to the media atmosphere in Russia?

I never watch the official propaganda, because I always know what they are saying. On the other hand, no matter how trivial it may sound, here in Kiev I came to understand better the character of the people. On the Maidan I met the elite of the country – not everyone has to be a warrior, but there were those quality types of people; people who had come from all over the country, feeling they had the potential to be soldiers. I respect these people greatly as a human, I can admire them as a woman. There should be such people in every country. I saw what a person is capable of – pure heroism. As a director I really need to see something like that.

Let’s talk about Nepal Forever. The protagonists give the impression of outsiders – what kind of real political and social influence do they have in Russia?

They’re very relevant in Russian politics – people there just need an organisation that is a parody of the real communists. The leader of the party (Sergei Malinkovich) was very close to the authorities at some point in history, then he surrendered his position and could not get back up. Another thing is that the party used to get quite high opinion poll ratings, until recently it competed seriously with the ruling party. And so for that reason, it was not very profitable, and it was necessary to cast a shadow on a movement that, despite all its historical collapses, still continues to evoke sympathy in people. From that point arises the understanding of where these strange formations on the political body come from.

So in the end, the film is not political?

No, it’s not. I decided that it would be much more valuable to make a comedy out of the situations and characters. Their adventures. All the absurdities I saw, their activities. They are really involved with what they can do – they have such an amazing talent.

This is the beauty of documentary film – when life itself organizes an additional meaning. When the heroes suddenly find out that Kim Jong Il has died and they decide to express their condolences to the North Korean embassy in Nepal – you can only dream of that kind of episode.

And in Nepal, by the way, communism has quite an acceptable form because the Maoists are a very influential party, the people are very sympathetic towards them. But meanwhile the country’s developing according to capitalist principles.

Who paid for the heroes’ trip to Nepal, anyway?

The producer. The film shows that we made the offer. So, first they wrote in the newspaper that they were going to go and rescue Nepal from civil war, but of course they didn’t go anywhere – it was a trap which everyone believed in. But when we suggested: “Let’s go for real!”, they said, “If there are tickets, we’ll go, of course.”

Did editing the story make it into a comedy?

I assure you, we didn’t include the funniest moments, which would have made you laugh so much that it would even have been uncomfortable. It’s not the actors, I deliberately tidied that up as well. I wanted to maintain the wonderful atmosphere of absurdity which I saw in their Saint Petersburg basement. I went down there and realized, that’s it – the movie!

And have the protagonists seen the movie?

No, they haven’t. Of course, no-one would have taken them to the premiere in Italy, but I tried to invite them to the Russian premiere. I was told that they kicked up a fuss on the internet claiming that the director hadn’t invited them – that was a lie, we did. It’s true that I didn’t buy them tickets for the train, that’s true, because for a few months I was actually unemployed, but I tried to arrange it by getting the festival to cover the bill.

But actually I think that some journalist must have showed them the film. Judging by how much they cursed in an interview, they must have seen the film. It is unlikely that someone told them about it in such detail, frame by frame.

Aren’t you afraid that they may block your film?

They won’t do it, we signed a contract with them. My producer took care of all the papers, despite the ‘leader’s difficult nature ...

I’d be scared by such a ‘difficult character’.

Yes, in the film he’s funny, a funny fox, but in life he’s quite difficult.

So when they’re on camera they’re still ‘acting’?

No, they weren’t acting. That was editing, shot selection. They didn’t ‘turn it on’ for the camera and often they did not know we were shooting. We are professionals.

I didn’t show those moments where the ‘leader’ was a very unpleasant character – I decided to make the film softer. There is a law of audience perception – the audience has to sympathize with the characters. I don’t settle my accounts with people through the medium of my art. If I wanted to show a corrupt little politician, I have all the material on hand to do that. But I do not want a purely negative character. I made him witty, sharp, strange – and he is, too!