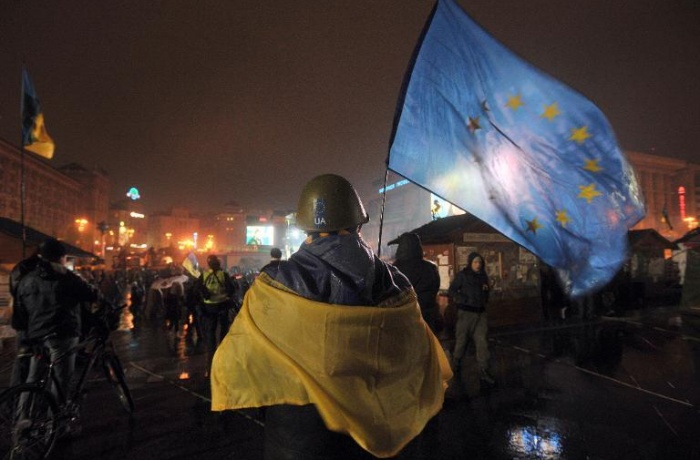 The statement has been published on the Ukrainian Helsinki Human Rights Union site...

The Draft Law of Ukraine # 3879 that was passed into law on January 16, 2014 and urgently signed by the President shows that Ukraine has entered an era of reaction and obscurantism.

This law was passed in violation of procedures for drafting, expert evaluation and review by legislative authorities. The law blatantly violates the fundamental freedoms of conscience, opinion, expression, information, assembly, association, movement, property rights and the right to privacy, thereby ignoring relevant constitutional provisions and articles of the UN International Covenant on Civil and Political Rights and the Convention for the Protection of Human Rights and Fundamental Freedoms, as well as the Article # 22 of the Constitution of Ukraine.

It is worth mentioning that this law has entered the term ‘foreign agent’ into modern Ukrainian law vocabulary. Those NGOs that ‘receive funds or other assets from ‘foreign’ sources and participate in political activity in Ukraine, including such participation in the interests of foreign sources’, fall under this category.

Simple linguistic and legal analyses of the latter sentence, which provides the legal definition of the term ‘foreign agent’, suggests that from now on any NGO that receives any kind of grants or other financial support from foreign foundations, embassies, organizations or individual, shall acquire this new discriminating status. The new law binds such NGOs to register, and introduces sanctions for evasion of such registration.

We believe that this law violates the most important principle of constitutional law and order - the rule of law - and violates constitutional rights of Ukrainian citizens and persons without citizenship living in Ukraine.

The term ‘foreign agent’ by itself has a negative meaning and stigmatizes those whom it applies to, as it portrays them as a potential threat, exposing such organization to the risk of potential aggressive social ostracism, expulsion and destruction.

Let us face the truth – this means that the ruling regime declared war against civil society.

Therefore, we hereby declare that we are not going to sign a pact of surrender in the war that we have not started. We will never accept that the authorities force us into social ghettos and hang signs saying ‘foreign agents’ around our necks - just as the Nazis marked the Jewish people with the yellow Star of David during the World War II.

We declare that, in our case, to accept this status of ‘foreign agent’ means to insult the memory of our great predecessors - Oleksa Tykhyi, Yuriy Lytvyn, Valeriy Marchenko, Vasyl Stus, V’yacheslav Chornovil - who gave their lives fighting for the human rights in Ukraine.

We understand the underlying motivation of these obscurantist actions of the ruling regime – being in a state of panic as they are in the face of the organized mass social protests, at any cost, they want to preserve their privileges in the neo-feudalistic system of power and property distribution that they have established  over the last three years.

All these foolish and short-sighted actions of the ruling regime have only one goal - to win the election of 2015. Therefore, this regime mobilized criminal forces to fight EuroMaidan and enlisted organizations with ‘Black Hundred’-style pogrom ideology. Today, these robbers of the Ukrainian society are targeting civic organizations that create jobs without getting any funds from the state budget and produce a significant share of gross domestic product.

Therefore, Ukrainian society will be forced to adopt new forms of non-violent resistance.

You can sighn the petion on the Ukrainian Helsinki Human Rights Union official site...