A free person is a beautiful person 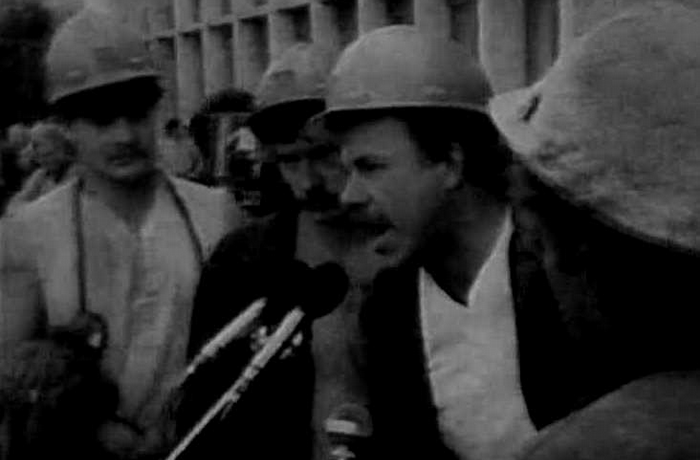 The July Storms is a duology about the Donbas miners’ protests.

Two years before the coup and the collapse of the USSR, in July 1989, the miners went out onto the central square in Donetsk with clear demands. These demands had 43 clauses, which included social (improving the living conditions of miners) as well as political demands, including removing the article about the leading and directing role of the party from the Constitution of the USSR. Almost all the mines in the region joined the protest at that time, and more than a hundred thousand people, who were intent on standing up until the end. As a result, their protest became one of the largest protests in Soviet history, and their victory was the beginning of the collapse of Soviet power and an important step in achieving Ukraine’s independence.

The first part, titled Strike, is the chronicle of the July events. It was filmed over four days by the directors Anatolii Karas and Viktor Shkurin, and by cameramen Anatolii Kripchenko and Serhii Tymofeyev. While all the central channels and the press were unanimously denying the scale of the protest, the documentary makers were not only recording the events, but they were also literally a part of them. They lived with the miners on the square, filmed their everyday life.

“A free person is a beautiful person”: this expression was heard often during the Maidan. But it had been noticed even earlier by the film director Anatolii Karas. With his colleagues, he showed the miners’ faces in a way they had never been shown before. The figure of a miner in Soviet cinema was a joyful laborer with a face covered in soot; the figure of a miner today is a gloomy man wearing a dirty suit and a helmet. In Strike, we see different faces, inspired and genuinely beautiful. During the whole film, the camera fixes on them, looks into them, tries to remember them. It shows the miners’ confidence in their own power, and the inevitable contradiction between their dislike of talking a lot and, at the same time, the wish to finally be heard.

During the film, we hear some of them; we see how others are indignant at the officials’ calls to stop the strike. As in any other protest chronicle, there are stages here: euphoria, unity, anger, confrontation, fatigue, a renewed burst of activity, and the joy of achieving the goal. Long before the films about the Maidan, Karas and Shkurin show a mass protest by Ukrainians from the inside. And, ironically, the July protests took place on the square next to what is now the Donetsk Regional State Administration, where the terrible events in eastern Ukraine would start in 2014.

However, in addition to the protest itself, the directors are also interested in the everyday life of the miners, with their horrible houses which should be demolished, with their extremely hard labor conditions. These are appended by shots from old propaganda films about life in the Donbas. Edited together in one film, they really feel like an exposure of the two-faced and deceitful Soviet reality.

But if Strike is more of an optimistic film (everything ends with the miners’ victory and the government’s resolution to fulfill their demands), its sequel (Outburst) is a much sadder story about the events of the year after. Despite the promises, most of the demands were never fulfilled, and most of the higher officials kept their positions. The second part is about the struggle within the corridors of power. It starts with a funeral after another tragedy in a mine, after which all the action moves to the corridors of power. The miners now find themselves on the enemy’s territory: their delegation is received by the representatives of the Regional Committee.

The heroes and the tone change accordingly. The characters are now the officials, the negotiators, the representatives of the strike committees, and the Communist party members living their last days. The key struggle boils down to the unwillingness of the latter to resign, their unreadiness to accept the blame or have any kind of dialogue. Here lies another curious analogy with the Maidan: the victory on the square was not the end of the system, but rather showed that it was necessary to continue the struggle. That is how the key questions of the second part emerge: How to avoid repeating the past mistakes, and how to change the system itself? This results in the eclecticism, even the inconsistency of the film: words lose their power, and the participants’ faces lose the beauty we had seen in them before. Here, one can see the familiar faces of the future Ukrainian power (such as Petro Symonenko), hear many familiar words and promises, feel the gulf between the politicians and the people, and notice the gradual transition to our present. Because if you think about it, the differences between the events of 1989-90 and the last two years are not so great. And it is very symbolic that the epicenters of both cycles of events were Donetsk and Kyiv.

On photo "The July Storms"