Traveling Docudays UA-2017: summing it up 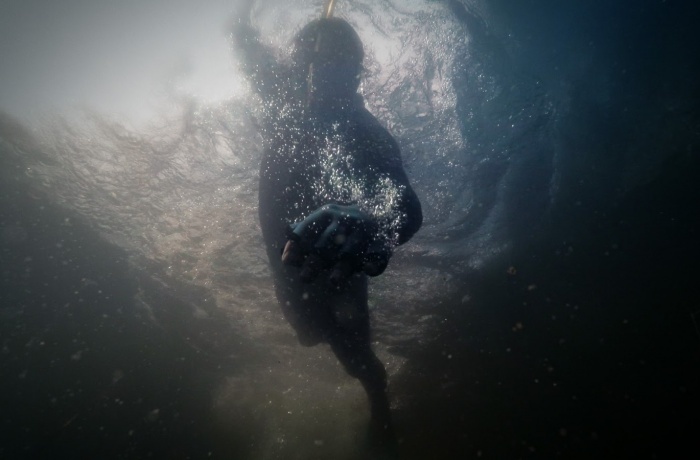 As 2017 is ending, the Traveling Docudays UA is also finishing its journey across Ukraine. In three months, some of the best documentaries were watched by residents of more than 200 cities and towns in 22 oblasts of Ukraine and in the Autonomous Republic of Crimea. The public program of the festival ended in Chernihiv on December 27 with a screening of the film Audience Emancipated: The Struggle for the Emek Movie Theater and a lecture by an art critic YevheniaMoliar about the development of public spaces in the city. Looking back at these busy festival months, let us recall the most interesting events of the Traveling Docudays UA 2017.

One of the first regions where the festival started was Transcarpathia. In addition to film screenings, the program in Uzhgorod included an exhibition based on the photo book .RAW: The History of Changes in Ukrainians and the Army. Some events, traditionally, brought schoolchildren to screenings and discussions about such problems as animal rights, after the screening of the film Refuge, or the development of the local botanical garden, related to the topic of the film The Winter Garden’s Tale. The key question here was, How teenagers and student activism can influence the situation? The film Audience Emancipated: The Struggle for the Emek Movie Theater also touched upon a question which was very urgent for the local context in Uzhgorod, namely the protection of the town’s local modernist heritage and of the local movie theater Uzhgorod in particular. Its history and present prospects were the subjects of a lecture by the architectural researcher Lina Dehtiariova. 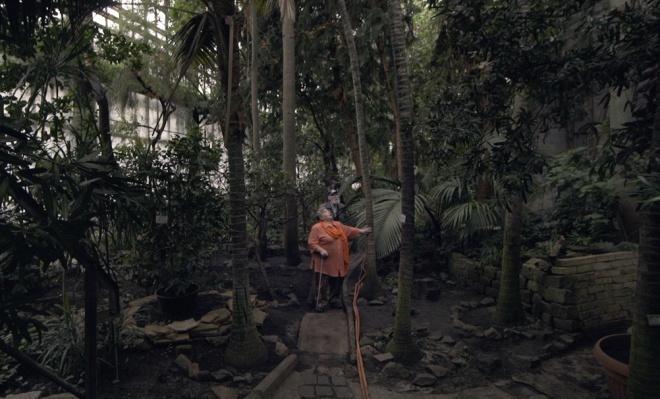 Still from The Winter Garden’s Tale film by Semen Mozgovy

The topic of this year’s festival is the relationship between humans and nature, which is a logical extension of sociopolitical relationships. Environmentalists remind us again and again that our position as “the kings of nature” is turning into a disaster for the environment and the animal world. However, is it possible to change this situation purely on the individual level? Why does the global evil look like blurred collective responsibility? These problems were discussed by Yosh, the curator of the Lviv Palace of Arts’ movie hall.

An inherent part of the Traveling Docudays UA program are human rights educational workshops. The trainers and coordinators of the festival in Lviv region share their thoughts about the events that targeted the educators of Lviv, on the topics of Children’s Rights at School and Gender Policies at School.

The legal educational events and the workshop in Kremenchuk touched upon such topics as conscious consumption and how each of us can can have an impact on climate change, opposing hate speech online, protecting human rights at schools. These events are described by the Kremenchuk festival coordinator Aliona Hlazkova. 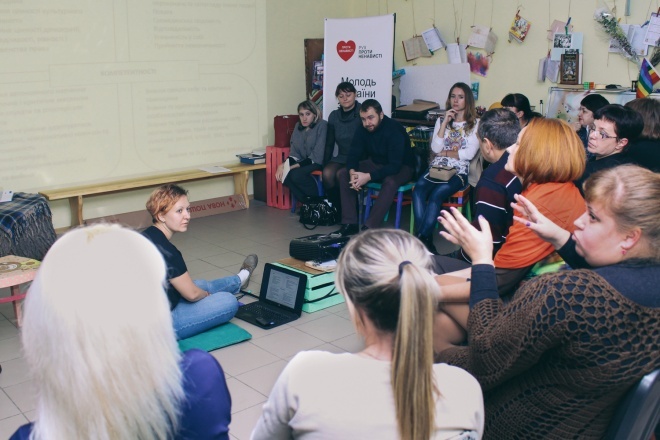 The Travelling festival in Berdiansk approached the problems of environmental protection and human rights in an original manner: in addition to the rich film program, the people of Berdiansk organized street actions, drew signs, created interventions into public space, and even used board games as an educational platform.

Special events in the festival program included screenings of the film Jamala’s Struggle. Both among student audiences and at public meetings, this film becomes a reason to talk about the deportation of Crimean Tatars and the problems they face today because of the illegal annexation of Crimea. In several cities, well-argumented discussions became possible thanks to the participation of experts from the organization Crimea SOS. 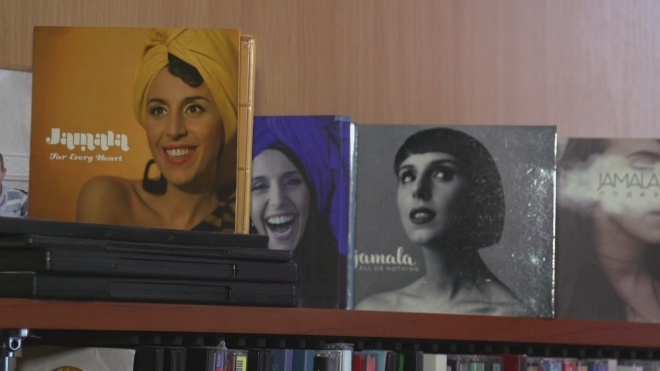 Another special event of the Traveling Docudays UA was the film The War of Chimeras, which in most cities was presented by its directors Maria and Anastasia Starozhytska. When they presented the film in Poltava, the directors talked about documentary cinema as a kind of vaccine against the war. You can read more about this in the full review of the event.

To Odesa and Kherson, the Traveling Docudays UA brought the exhibition of posters titled Trust but Verify, made by Pictoric Illustrators Club. The exhibition featured works by artists who reflect on the condition of the media in general and media literacy in the Ukrainian society. The exhibition opening event in Odesa included a discussion with the poet and translator Borys Khersonskyi. The event was moderated by a journalist and media critic Svitlana Bondar. You can listen to the audio recording of the conversation at this link. 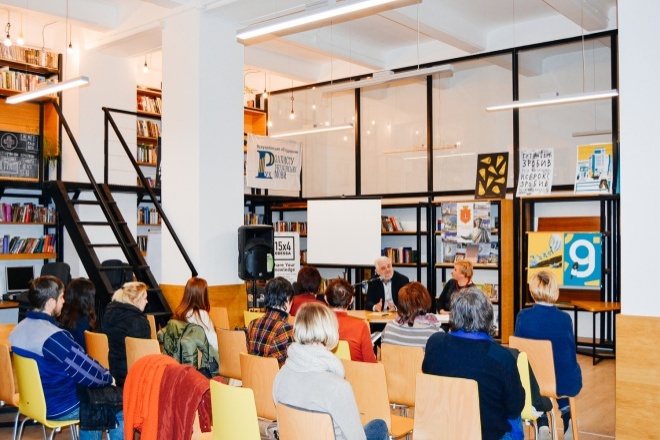 Discussion with the poet and translator Borys Khersonskyi in Odesa

This year, the program of the Traveling Docudays UA festival includes the film Audience Emancipated: The Struggle for the Emek Movie Theater. The history of Istanbul protests is not just a struggle for an iconic place which is important for the citizens. These protests were concerned with the question, Who owns the urban space? They inspired us to start a conversation about the Ukrainian context. By involving local experts, artists, urban researchers, and activists in the discussion, we want to study how public spaces develop in Ukrainian cities, and who influences the changes in public space.

For example, the events in Kharkiv were dedicated to the city’s modernist heritage and to the way art can interact with public space. We offer you to read an interview with the moderator of the discussion, the architectural researcher Yevhenia Hubkina. 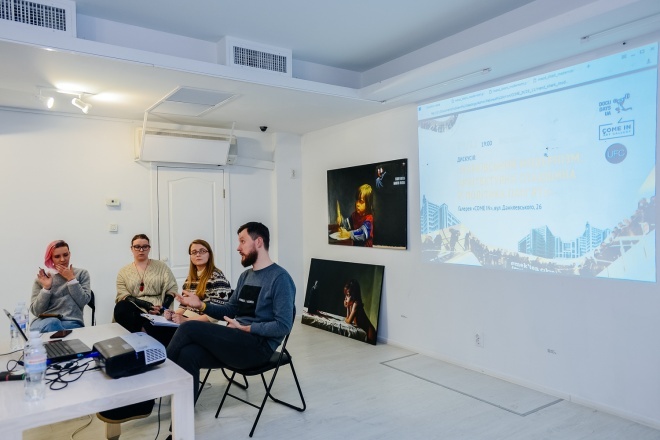 In Vinnytsia, the discussion was about abandoned buildings, such as the Russia film theater, and about the territories and parks whose purpose is not sufficiently articulated by the city residents and the municipal government. The event in Odesa also brought representatives of various city initiatives together to discuss relevant factors and actors that shape the city’s public space.

The art critic Yevhenia Moliar visited Ivano-Frankivsk and Chernihiv with a lecture about rethinking the Soviet heritage in the context of revitalization of houses of culture, as well as about the ways to involve city residents in decision making. 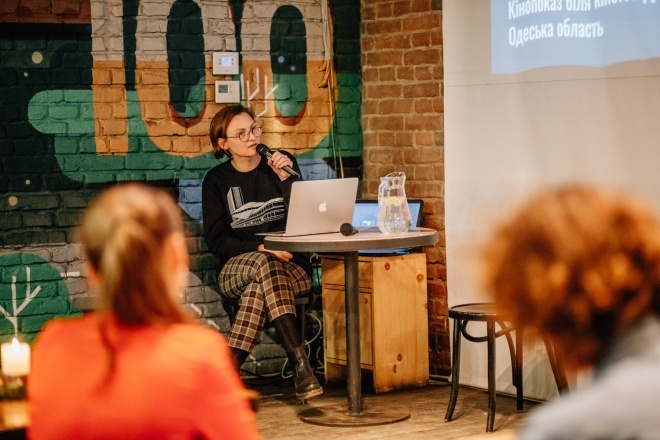 The events mentioned above are only a small fraction of the vast and incredibly rich program of the Traveling Docudays UA. In turn, the program is created with the thought that documentary cinema is a driver for articulating social problems. And articulation is already the first step to solving them. The Docudays UA team is grateful to all our regional partners for the joint organization of the Traveling festival. Traditionally, we are now starting the intense preparation to the March festival Docudays UA 2018 in Kyiv. See you next year!

Main picture: still from The Nature of My Heart film by Jaakko Ruuska