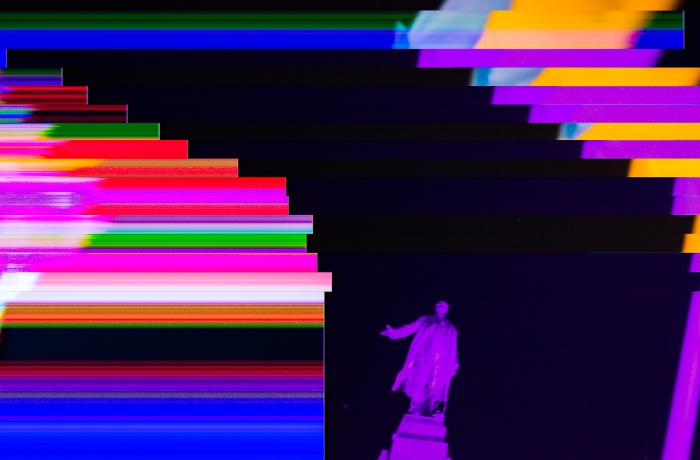 Docudays UA is on tour across Europe for the second time in its history. The first shows took place in Madrid in mid-October. In November and December, the See Ukraine festival project will visit Munich and Paris.

This year’s See Ukraine concept is named “An Empty Pedestal”. It represents an attempt to reflect on and explain to the foreign audience the situation that has developed in Ukraine. For this reason, the project includes screenings of modern documentaries presented by their authors, an exhibition of Ukrainian contemporary art and an open discussion with German and Ukrainian intellectuals.

Read more about the three pillars the current project leans on in our blog.

First of all, the exhibition project curated by Oleksandr Mykhed offers snapshots of the Ukrainian reality presented through the diverse lens of contemporary art. The selection includes the photo and video art as well as installations by Valerii Miloserdov, Olexandr Navrotskyi, Yevhen Nikiforov, Serhii Radkevych, Maria Plotnikova, Ihor Chekachkov, Yulia Chervinska as well as a performance by Kostiantyn Zorkin. It also features a collection of rare archival photos by the amateur Eastern Ukraine-born photographer Mark Mykytovych Zalizniak (1893 - 1982) whose recently discovered legacy is gaining greater significance in the current circumstances.

“As each subsequent Ukrainian revolution rages by, an age-old caricature finds its new embodiment. In it, people pull an idol from a pedestal with huge ropes. The pedestal then rotates, and people fill the vacant spot with a new figure. Today’s moment is unique, however, as the figures of the past have been overthrown, and trust in them has been lost. New heroes are yet to fill the void, - says art curator Oleksandr Mykhed. - We want to prolong the “Empty pedestal” situation as much as possible, to delay the moment of choice where reality’s further path will be set and the heroes identified. This story is not about de-communization or the overthrowing of monuments, it is about continuously searching, about what comes after».

The exhibition opens in Munich, at the LOVAAS gallery, on November 6, and in Paris, at the Jour et Nuit gallery, on December 4. 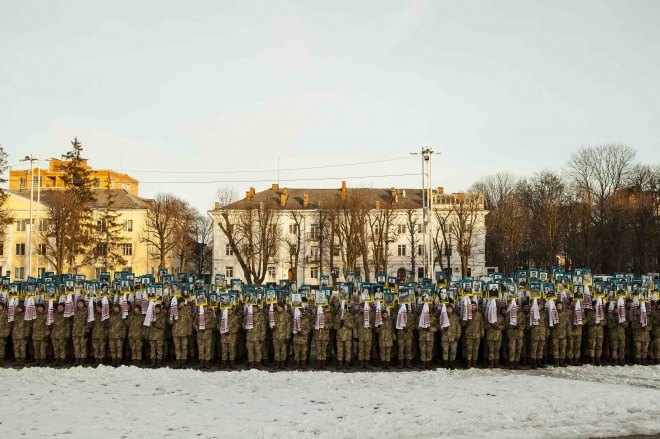 The artist work by Valeriy Miloserdov

Film screenings lay at the very foundation of See Ukraine. It is through the force of documentary filmmaking that the project tells the foreign audience about the country's present condition.

“There are several focal topics in the film programme, but the most acute among them is probably the post-traumatic mode of existence which our society has been enduring. Following the Revolution of Dignity, the Crimea was annexed, and then the war began, continuing up until now. Over these five years, Ukrainians never got the opportunity to recover and had to haphazardly produce a memory policy, not to have the old system changing its outfits and tricking them once more, - says See Ukraine curator Olha Birzul. - This is why the film characters do not feature grand historical personalities. We are telling the stories of ordinary people who are the main driving force of contemporary Ukrainian history. We carefully study them all around, looking at both the heroic sides the ones that are not so shiny. That’s because the reality isn’t black and white. Reality is all about undertones. It is noteworthy that “The Cacophony of the Donbass” by Igor Minaiev will be screened in each of the three cities. It is a film that explores the East of Ukraine and takes a critical stance when considering the phenomenon of the Donbass».

You can find screening times for all three cities here. In Munich, tickets are available at the Monopol Kino webpage.

The discussion is an integral part of the See Ukraine project, as it provides more context to the latest events in Ukraine. This is a conversation that the foreign audience can freely join to understand Ukrainian reality more deeply. In Munich, for example, the discussion moderator, the writer and philosopher Volodymyr Yermolenko, suggests talking about «Ukraine in Search of a Post-Communist Identity».

“Two opposing trends are currently in force in Eastern Europe – “re-communization” and “de-communization”. The whole controversy is not about communist ideology, but about authoritarianism. Eastern Europe, and Ukraine in particular plays a key role in an increasingly marked global confrontation between new authoritarianism and liberal democratic values. Following the 2014 Revolution of Dignity, Ukraine is trying to oppose Putin's “recommunization”, that is, the return to the old Soviet practices and authoritarian policies, - Volodymyr Yermolenko explains. - In the broader sense, Ukrainian decommunization stands for freedom as opposed to oppression, pluralism as opposed to coercion, justice as opposed to tyranny”.

The open discussion in Munich will take place on November, 6 at Ludwig Maximilians University. The platform experts include historian and researcher Dr. Franziska Davies, public activist and co-founder of “No Borders” Mr. Maksym Butkevych, and art curator Mr. Oleksandr Mykhed.