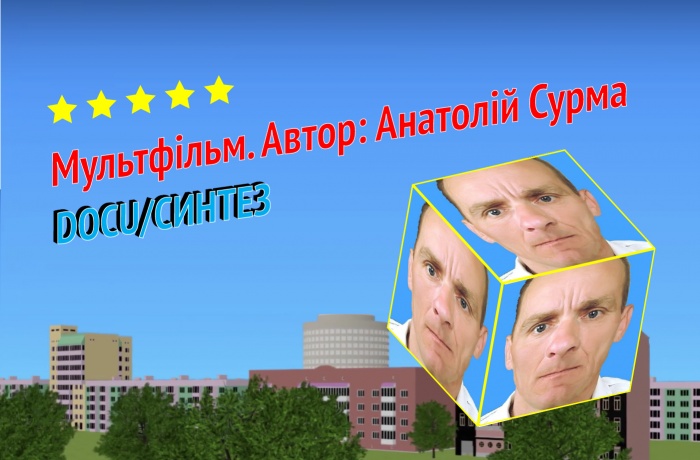 The visual aesthetics of the animation refers to early graphic-editing software, the 3D of the early 2000s, and the first editions of GTA and the Sims. If the developers of the latter suddenly decided to create a Ukrainian version where characters live in the country, chop wood, care for cattle and receive subsidies, they’d definitely borrow Anatolii Surma’s characters. Grandma Palazhka, Grandma Paraska, Grandma Karga, Uncle Goon, Sveta, Dima appear in multiple stories, turning the short animated essays into an enigmatic series.

The characters exist in a specific objective and temporal environment, at the same time richly decorated with psychotic ornaments and anxious colours. You constantly run into recognisable material and architectural details: church tops, concrete fences, wall panels, motley carpets, yellow buses, even a leopard-print couch. On the other hand, if the features of today’s life are recognisable, nevertheless they are whimsically mixed up and attached to artistic abstraction.

Education, environmental problems, family relationships — these are only some of the issues which the author addresses again and again. We see a local conflict in the spirit of The Kaydash Family, with tensions rising to the level of an Ancient Greek tragedy, but it instantly expands to a comment on global geopolitical problems. It isn’t hard to notice that the author has a political, civic and ethical position and a stable moral compass outlined in his various stories.

A somewhat detached narrative manner, characteristic gaps in the narrative, a concise manner of expression; these have the effect of leaving something unsaid. The storylines themselves feel like revelations received by Agent Cooper or his doppelganger Bob during a trip to the Black Lodge. This metaphor is also supported by a peculiar semiotic system of sound (such as ‘trumpet trill’ which means ‘screeching’), the characters’ movements, and the camera’s trajectory.

After all, it’s not easy to define the tone of the narrative: is it serious, ironic, or maybe post-ironic? But Surma’s language is sufficiently modern to keep our attention, to break through the perception of being attacked by the diverse range of intensive visual messages.

The search for a new form and a convincing means of expression is a symptom of art. Then, according to the rules, you need to find the context and language of description — art brut, outsider, naive art. But the categories of art criticism which come to mind in attempts to conceptually define Surma’s animation seem discredited by now.

On the other hand, this strange world of the pandemic also requires a search for a convincing language to describe it. The task gets more complicated if you rule out irony, which, of course, is a symptom of helplessness before the new. In any case, Anatolii Surma’s animated films are a self-sufficient reality, which is quite capable of speaking to the audience.