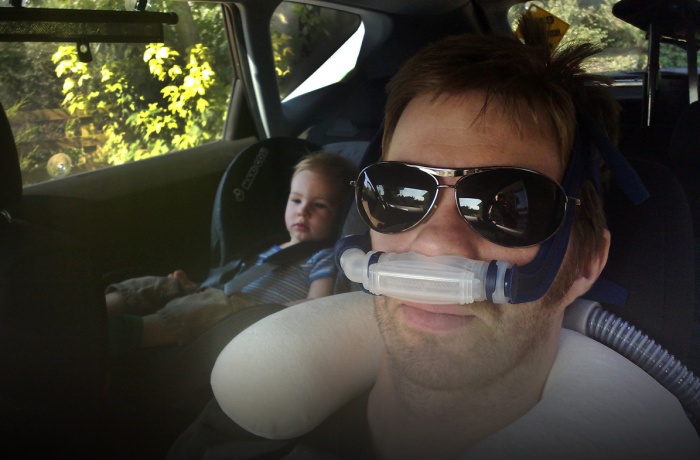 On June, 21th at 7 p.m Docudays UA and Cinema Club in NaUKMA will present the award-winning feature documentary I AM BREATHING directed by Emma Davie & Morag McKinnon and join the Global Screening Day of this film .

It is a documentary about the thin space between life and death. Neil Platt ponders the last months of his life. Within a year, he goes from being a healthy young father to becoming completely paralyzed from the neck down. As his body gets weaker, his perspective on life changes.

Knowing he only has a few months left to live, and while he still has the ability to speak, Neil puts together a letter and memory box for his baby son Oscar. How can he make sense of the last 34 years? How can he anticipate what Oscar might want to know about his father in a future Neil can only imagine? He tries to tell the story of his life from his memories and impressions of love, friends and motorbike rides.

Neil faces Motor Neurone Disease with incredible humour and honesty, determined to share this last stage of his life through a blog, which touched many people. With his posts forming the film's narration, I AM BREATHING tries to listen to Neil as he asks "what makes us human" in the last months of his life.

About the Global Screening Day of I AM BREATHING

The award-winning feature documentary I AM BREATHING is playing a major role in a unique global event that will take place on 21 June this year. As part of Global Awareness Day for motor neurone disease (MND), also known as ALS or Lou Gehrig's disease, the film will appear on screens worldwide from Australia to Ukraine with the aim to promote awareness and raise funds for MND research. The UK premiere of I AM

BREATHING on the previous day, 20 June, at the Edinburgh International Film Festival will celebrate the launch of this campaign.

About the disease MND or ALS

Motor neurone disease has been described as the last truly incurable disease of the modern day, and in the vast majority of cases it is fatal.

MND is a rapidly progressive and fatal disease. It can affect any adult at any time and attacks the motor neurones that send messages from the brain to the muscles, leaving people unable to walk, talk or feed themselves. The cause of the disease is unknown, and there is no known cure. Around 5,000 people in the United Kingdom have MND at any one time, with half of these people dying within 14 months of diagnosis. It kills five people every day in the UK.

Emma Davie is a documentary filmmaker and Programme Director of Film & TV at Edinburgh College of Art, University of Edinburgh. Previous work includes What Age Can You Start Being An Artist? for Channel 4 (2004, nominated for Grierson Award); Gigha: Buying Our Island (2002), a one-hour film for BBC/Scottish Screen; and Flight, a BBC/Canadian co-production (2000).

Emma's background in experimental theatre and performance gave her a love of collaborative practice. She worked with, amongst others, Robert LePage on Tectonic Plates but also ran her own company Clanjamfrie which did huge large-scale sitespecific performances. She was on the board of the European Documentary Network (EDN) and writes for DOX magazine. She has worked as tutor or consultant with EDN, European Film College, Storydoc, Discovery Campus, East European Forum, Docs Barcelona, and many others.

Morag McKinnon is a fiction director whose most recent film Donkeys won a Scottish BAFTA in 2011 for Best Feature. It was the second part in the Scottish/Danish co-production with Lars von Trier's company – the follow up to Red Road. Prior to that, she has directed award-winning series and shorts including the BAFTA-winning series Buried (2004) and the short film Home, which also won a BAFTA for Best Short and 16 international awards including the Fox Searchlight New Talent Award. Her other award-winning short, Birthday (2001) won the Silver Bear at

the Chicago Film Festival. Morag is a graduate of Edinburgh College of Art.

More information about I AM BREATHING and Global Screening Day can be found here - www.iambreathingfilm.com

Entrance is FREE Of CHARGE