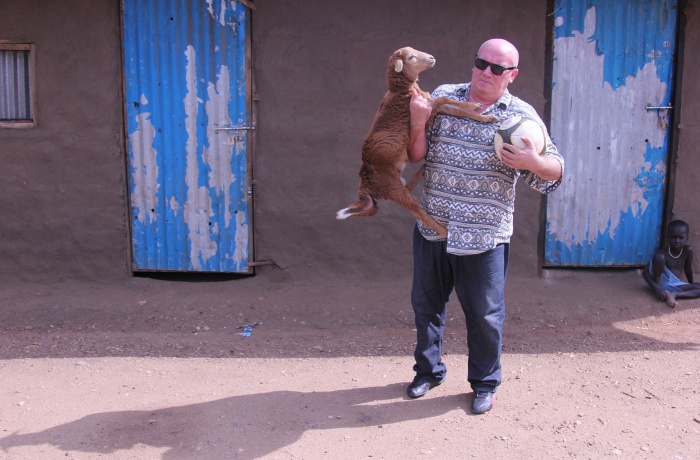 Every country should have a national football team. Seeking to form a national football team, the new country calls in the Serbian Zoran Djordjevic, a hugely successful veteran coach. What kind of difficulties he had to face? Find out today at 6:30 p.m. in Cinema House’s Read Hall at the screening of Coach Zoran and his African Tigers. After the screening there will be a Q&A with director and discussion about corruption in Ukrainian football with Yuri Nikolov, coordinator of the Our Money project.

Almost everyone faces corruption every day. It has generally taken over all social relations. A successful, corrupt transaction is the dream of many individuals. For many, it becomes the true meaning of life as a key to getting rich quick and realizing their own dreams as fast as possible. Information in the mass media about corruption does not have any social, political or legal consequences.

People are so used to it, and accept it as a normal part of their everyday life, that no-one is surprised, and no-one is inspired to take any active steps.

New times require new words and concepts that are not replicated and not compromised, which would force us to think about the situation in which we all find ourselves, and how to get out of it.

We have invented a new word – ‘Ideorruption’. This refers to the corruption that has long acquired the traits of an ideology that has become firmly entrenched over the years in the Ukrainian mentality.

In fact, ideorruption is a destructive ideology directed against the public interest. It is an ideology that is based on a total disregard of human rights – because corruption is based on a violation of property rights, the right of access to information, the right to a fair trial, freedom of speech and many other rights.

A corrupt system is able both to defend and attack. It protects itself against attempts to destroy or limit it by exploiting the dependence of its users, and that of those who are used by it. It strongly attacks and tries to destroy anyone who interferes with it, by exploiting the circular dependency of many of the persons included. Unfortunately, most people in Ukraine do not realize that the fight against corruption must begin with the struggle for human rights.

By declaring this year’s theme to be ‘Ideorruption’, we seek to understand the extent of corruption in Ukraine and around the world, to follow and show the links between the causes and consequences of corruption. And we also want to show how the solidarity of ordinary people can resist such ideorruption.

The Euromaidan largely arose in opposition to ideorruption. Its victory offers hope that our society is willing to fight for their rights and freedom. However, it is much easier to deal with the corruption of your ideological opponents; it is very difficult to fight corruption within one’s own side.

But our dream is that in the future, the ideology of ideorruption will be replaced by one of solidarity in maintaining human rights.

Look for your own way to eradicate ideorruption together with the characters from the films Putin’s Games by Aleksandr Gentelyev, Coach Zoran and His African Tigers by Sam Benstead, and Master of the Universe by Marc Bauder, as well as with our guests who will show you how to look for corruption, how far it has reached, how to fight it, how to punish those responsible, and how to return a stolen state to its people.