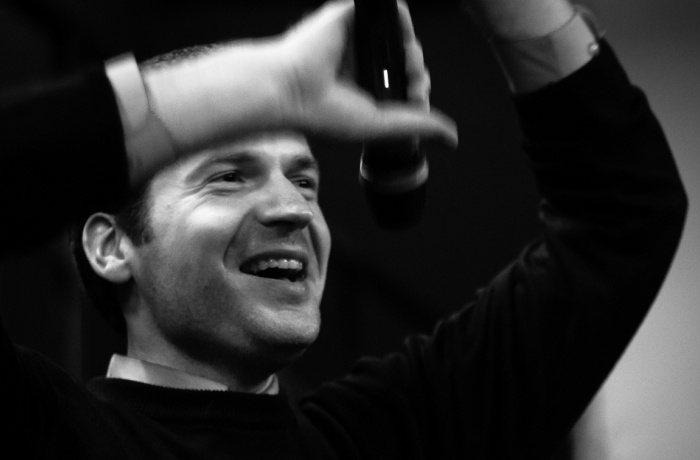 Andrei Rus is a Romanian film critic and cinema theorist; he was on the jury for the Cannes Film Festival Critics’ Week, and is now a member of the Docu / Short jury. In his conversation with Stanislav Bityutsky, the chief editor of Cineticle, he talks about his vision of film criticism, documentary films, and considers his favorite movie genre, the diary, about which he will speak more during his workshop.

Please tell us about your work as a film critic.

I coordinate a film magazine, Film Menu, which is published every two months and is sponsored by the Film Faculty in Bucharest. It is written by very young film critics and has been a platform in the past six years for creating a new generation of Romanian film critics, which I think is a really important detail (at least for me). For some years (since recently) it has been the only printed film magazine in Romania, and the particularity about it is that it was never commercial: it’s in black and white with a lot of text, beside the reviews everything else is pretty long (longer that four pages, usually). We write a lot about unknown cinema, nobody gets paid for contributing, and we also distribute it for free.

What are your priorities in writing?

I prefer to write longer pieces rather than short reviews or articles, because I like to argue a lot, and a wider space allows me to construct more complex ideas. And since I am the coordinator of the magazine, I allow myself as much space as I need for an article. It’s not an abuse, because I would do the same for any of the other critics of Film Menu.

What place does film criticism have in Romania today?

The same place as everywhere else: it has to discuss new and old ideas about cinema that in the end might, and in the best case scenario should, influence the filmmakers in their approaches to the medium.

There are reviews of documentary cinema in your blog. What are the main differences between writing about feature films and documentary?

I don’t necessarily make this distinction between documentary and fiction cinema. I was always a big admirer of film diaries, which are usually part documentaries and part fictions (or performances), so I got used to not considering things that way. Also, when I write about a film I never write about it as being a fiction or a documentary. I believe there are many more interesting things to say about a film beside that.

What is the example of a great documentary film for you?

A great film makes me curious to find out more about the issues discussed in it on my own, while an awful one pretends it says everything and closes the subject. I always find this assurance to be an imposture.

Today, most documentary films don’t differ from conventional TV reports. TV and documentary, are they brothers or enemies?

I think it depends on the conscience of the filmmakers and the producers. It’s true that I can’t remember for the moment a great recent TV documentary, but I guess some must exist, right?

At the same time, artistic documentary is changing a lot nowadays. There appears to be more manipulation, fantasy. The Last Time I Saw Macao by Rodrigues & da Mata or Redemption by Miguel Gomes, for example. Can we talk about it as a new trend?

I don’t think that’s necessarily a new trend, since the first definition for the concept of ‘documentary’, expressed by John Grierson in the thirties (or the end of the twenties) was “a creative treatment of reality”, which implies a lot of manipulation and also fantasy. I loved The Last Time I Saw Macao, Gomes’s film not very much. But one of my favorite filmmakers ever was Chris Marker. He always made this kind of film, and he started making them in the fifties. And another filmmaker who made that kind of fantasy documentaries was Joris Ivens, another huge artist.

What are the trends in documentary filmmaking today, in your opinion?

To be very diverse and to raise serious questions about some distinctions that used to be considered very clear between ‘documentary’ and ‘fiction’.

Should documentary get rid of editing talking heads and some ‘hot’ materials, like annoying clichés or something obsolete?

No, if it doesn’t abuse these techniques and if it uses them in creative ways. Generally I am not a radical, I don’t wish for anything to go extinct.

Can documentary films change something today? Do they have more opportunities for that change in comparison with feature films? Do you know some examples?

The problem is that a clear distinction seems to exist between documentaries and fictions, which I think usually works to the disadvantage of the first category of films. This is the reason why I think so-called ‘fiction films’ are usually more appealing for the audiences and probably, since they are seen by many people, they can change some of their views on life and society more widely. I think great cinema functions a little bit as a document, and can also be perceived as a fictionalized construct. So if we stopped discussing fiction and documentary cinema as if we all knew what they are all about, then probably something useful might result from this, like for example, the destruction of some prejudices which make audiences associate the idea of documentary with that of finding new information about the world, and the idea of fiction with entertainment and/or emotions. Films are all these things together and more.