The Yes Men: Revolting Protesters at the Opening of Docudays UA 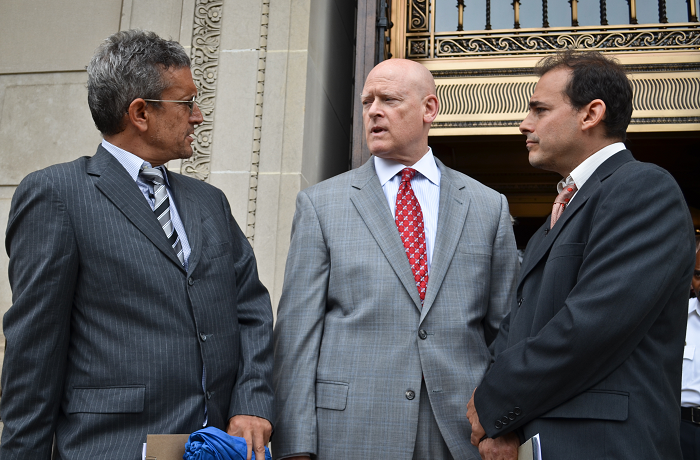 Enough with grass- roots protests! Who will finally take care of the managers of corporations? Who will lead the police, and consent to protests on their behalf? Who will make an announcement in the name of Shell and the influential American lobby? We know who – the Yes Men.

The Yes Men are a group of activists who, for more than twenty years now, have been working on the issues of environment, capitalism, colonialism, and homophobia in a way that prevents even the media from being sure whether they are serious.

Organising a press conference at the state level and announcing that the government is halting the usage of harmful petroleum? Why not? Conducting a fake conference at the international UN meeting on climate change, and claiming that Canada will pay its debt to Uganda for all the crimes against the environment it committed? It is possible! If you are a white man in a suit, people will eagerly believe that you are a head of government department, a powerful lobby group, or a giant corporation.

One of the main methods of the Yes Men activism is so-called ‘appropriation’ or ‘culture jamming’. In other words, they are fighting against the negative aspects of mass popular culture and the propaganda spread by it with its own methods. Culture provocateurs infect mass media, popular culture, and advertisement with the virus of disagreement and critique, using high speed spreading of such information in our society of consumption and spectacle.

By creatively combining these methods during two decades of their activities, The Yes Men often sharply mocked conservative politicians of the USA and attracted attention to irresponsibility of large corporations.Thanks to their pranks,we have become more aware of the injustice in our world and have some great examples of how to fight against it. Consequently, the Yes Men have acquired negative reputation among the establishment they make fun of – it’s not by chance that the English title of the movie The Yes Men are Revolting could be interpreted as ‘The Yes Men are Disgusting’.

At the beginning of their activities, the Yes Men were dealing primarily with the issues of capitalism. Recently, their main focus has been on climate change. The Yes Men’s actions, with their environmental survival balls, only look funny at first sight. It is a parody of the pursuit of capsules, bunkers, and other redeeming refuges from natural disasters or nuclear wars. Such developments were especially popular after World War II in the USA, in case of war with the USSR or natural disasters. The Yes Men mock these capsules to emphasise that climate change, with all its tragic consequences, is inevitably close. However, the activists believe that its prevention is still possible. Even in the course of our lives, humans could completely replace fossil fuels, which are one of the main factors of climate change, with renewable energy sources. But neither the gov- ernments of major countries nor the corporations are interested in this. Paradoxically, only those who consume the most, destroy the most natural resources, and have the most power will be able to save themselves.

The Yes Men are not indifferent to documentaries. This is the third movie devoted to their activism. In 2015, Docudays UA featured Ash and Money, a movie about the Estonian theatre group NO99 and their project – a fake political party, which aimed to expose the mechanisms through which politicians capture votes. Both NO99 and the Yes Men are involved in self-documentation. They make powerful political movies, which capture all the stages of their protest actions and provocations – from passionate enthusiasm in the beginning, through the elaboration of the idea and the realisation of its inevitable barri- ers, and finally to the bitter understanding that nothing can be changed here and now, urgently and immediately.

For the last couple of years, the Yes Men have been passing all their secrets on to activists, and sharing what they have learned over the recent decade which they have dedicated to ‘identity correction’. The result of this activity is the Yes Lab workshop, which aims to help groups of activists to organise their own creative events that will attract media attention. One of these workshops, The Yes Lab: Brainstorming creative action, will take place during the festival as a part of the RIGHTS NOW! human rights programme (March 25 at 1 p.m., Cinema House, White Hall).

In Ukraine, environmental activists have for many years now been working in the spheres of legislation and education, conducting climate marches and performance actions against dangerous and illegally concealed deforestation. While activists are trying to attract attention to climate change and environmental problems, the state continues to sell its territories to first-world countries for their harmful industries, industrial cities are still beating cancer and asthma disease rate records, and the slopes of the Carpathian mountains are being chaotically cut out.

The experience of Ukrainian activists in self-documentation is not too obvious, and that’s why The Yes Men are Revolting could become a handbook not only on creative protest, but also on how to record it on video. For those viewers who are far from activism, attempts to stop global climate change will look like a real adventure story, only with real characters and real corporations.

THE SCREENINGS OF THE YES MEN ARE REVOLTING WILL TAKE PLACE IN CINEMA HOUSE: ON MARCH 24 AT 7 P.M. IN RED HALL (BY INVITATIONS ONLY) AND ON MARCH 25 AT 11 A.M. IN BLUE HALL (FREE ENTRY).

Sean Devlin will personally attend the festival and present the movie. He is one of the most experienced members of the Yes Lab team, which is responsible for organization of various projects by The Yes Men. Admission to the opening ceremony by invitations only. Additional screening of “The Yes Men Are Revolting” will take place on March 25th, 11 AM, in the Blue Hall of the Cinema House. Free admission.

Photo: The Yes Men Are Revolting

The festival pass will give you access to the intense Docudays UA programme which includes the best documentaries from across the world and meetings with their authors. The 18th Docudays UA will take place between 26 March and 4 April 2021.

To purchase the pass, indicate your name, surname, email, and phone number. If the payment for the pass is successful, you will receive an email with the necessary information.