Civil Pitch 2.0 was supported by the Goethe Institut 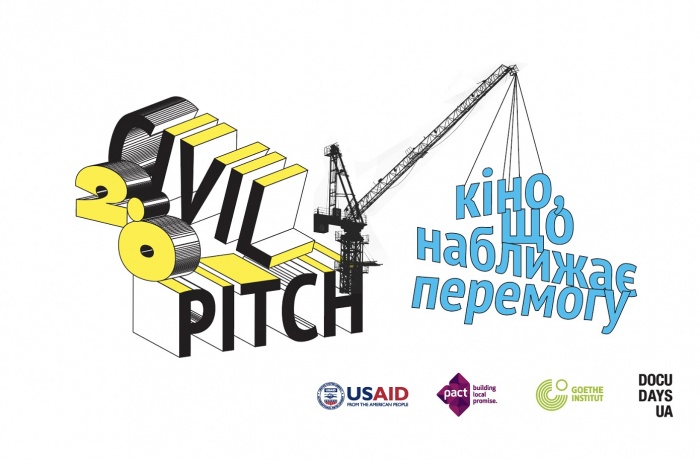 The Goethe-Institut contributed to the funding of the documentary short films of the Civil Pitch 2.0 project — each of the four winning teams received additional financing of €2,500.


Goethe-Institut is a cultural institute of the Federal Republic of Germany which operates worldwide and supports international cultural cooperation; it is a long-term partner of the NGO Docudays, which joined the Civil Pitch 2.0 project as a financial donor to create documentaries that bring victory closer. The €10,000 grant was distributed among the four winners of Civil Pitch 2.0, selected in March 2022 by an international jury. Each of the projects received additional funding of €2,500.


Civil Pitch 2.0 is a project of the NGO Docudays, created and implemented with the support and in partnership with the programme USAID/ENGAGE (Enhance Non-Governmental Actors and Grassroots Engagement). The competition for documentary short film projects (up to 15 minutes) on topics relevant to Ukrainian civil society was announced in January 2021. Due to Russia's full-scale invasion of Ukraine, the Civil Pitch 2.0 competition programme had to be changed, so the pitching and workshops for project participants were shortened under the guidance of international and Ukrainian mentors. The project team received 150 applications, from which the jury selected four projects that received grants of 250,000 UAH for film production.


The winners of "Civil Pitch 2.0. Films that Bring the Victory Closer" are the following projects:


Armiiska, directed by Pavel Pavlo Dorohoi, is a chronicle of the underground "shelter city" set up at the Kharkiv metro station of the same name in the first months of the full-scale invasion.


Guests from Kharkiv, Password "KonKHfeta", directed by Halyna Lavrynets, is a socio-comedy tragicomedy about the clash of worldviews in the village of Kozubivka in Poltava region.


Under the Wing of the Night, directed by Lesia Diak, is a fragile coming-of-age story that unfolds amidst challenges brought by war and forced emigration.


Robotics in a Mining Town, directed by Anastasia Tykha, is based on the idea of ​​activist Hanna Telychko. This is a film about the incredible resilience of the Telychko family from Donetsk region, who, having lost their home for the second time in 8 years, despite everything, lead a children's robotics club to victory in the World Olympiad.


Now, with the support of USAID/ENGAGE and Goethe-Institut, these films are in the active phase of production in cooperation with international and Ukrainian mentors. The premiere of the Civil Pitch 2.0 winning films is scheduled for the 20th Docudays UA in 2023.


Civil Pitch 2.0 is presented by the NGO Docudays within the framework of USAID's Enhance Non-Governmental Actors and Grassroots Engagement (USAID/ENGAGE) and implemented by Pact in Ukraine. The content of Civil Pitch 2.0 is the sole responsibility of Pact and its partners and does not necessarily reflect the views of the United States Agency for International Development (USAID) or the United States Government.