DOCU/SYNTHESIS: Other species, agency, and means of expression 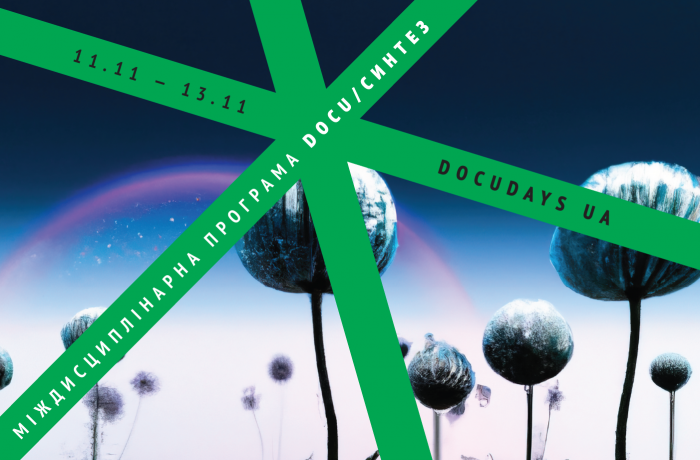 We continue the DOCU/SYNTHESIS Interdisciplinary Programme, launched in 2021, which explores media in general and moving images in particular on the intersection of different disciplines. This year’s focus is on the search for means of artistic expression under the conditions of contemporary reality.


As a part of the DOCU/SYNTHESIS programme of the 19th Docudays UA special edition the State of Emergency, on 11 November at noon we invite you to the ukrainian premiere of Invasions 1.2.3, a VR film by Alevtina Kakhidze and Piotr Armianovsky. On 12 November at 3:00 p.m., we expect you at the panel discussion Invasion: From a scientific term to an artistic metaphor, which will discuss the project.


The story into which the Invasions 1.2.3 project immerses us starts next to the Memorial to Everyone Who Died Alone Under Russian Occupation, created in 2021 by the Ukrainian artist Alevtina Kakhidze at the place where her mother is buried. Bathed in sunlight, we take a walk in the villages of Muzychi and Mostyshche, the city of Irpin. The film was made after the Kyiv Region was liberated from Russian occupiers in 2022.

“At some point I felt that our Ukraine in the reality of war is so different in each and every centimeter: ruins here, and here there’s already children playing. In order to convey this better, I used the format of 360° video. It’s also important for me that this format allows the audience to choose what to look at on their own.


“Our work is much closer to a performance than to a film. I’d even say that it’s a play where the stage is built around the viewer who is in the center of the developments. The 360° camera lens captures everything all at once, without allowing you to edit in the classic sense of the process. However, there is some editing in our film, even though it’s organized differently,” shares Alevtina Kakhidze, the author of the idea, artist and performer.


“In the DOCU/SYNTHESIS programme, we focus on the search for a film language — on the diversity of ways to tell stories using new technology. Invasions 1.2.3 is a film which has struck and inspired me personally,” comments Roman Bondarchuk, Art Director of the Docudays UA festival.


The project is based on Alevtina Kakhidze’s long research work looking into the topic of invasive plants, as well as her collaboration with Oleksiy Kovalenko, who has a PhD in biology and works as a researcher at the National Natural Science Museum of the National Academy of Sciences of Ukraine.


“Reality which, on the one hand, resists representation, undermines all available symbolic means, but on the other hand, strengthens the need for expression as a form of resistance. It seems like the search for means of artistic expression has shifted to a different plane for us,” adds Oleksandra Nabieva, curator of the DOCU/SYNTHESIS programme.

In order to facilitate logistics and create optimal conditions for attending the screenings of the VR film, we ask you to register for the event here.

Watching in a VR helmet is accessible to viewers wearing glasses. Entry to all the events in the programme is free.

Events of the DOCU/SYNTHESIS programme:


Invasion: From a scientific term to an artistic metaphor | Zhovten Cinema (Kinoman Hall)


During the panel discussion, we will talk about the form of artistic expression on the intersection of performance and film; about the characteristics of working with VR in the context of the relevant landscape of today; about the interaction between science disciplines and contemporary art; and about how the agency of plants is linked to war and colonialism.

_____________
The 19th Docudays UA Special Edition is held with support from the Embassy of Sweden in Ukraine, the Stabilisation Fund for Culture and Education 2022 of the German Federal Foreign Office and the Goethe-Institut, European Cultural Foundation, International Media Support, Ukrainian-Danish Youth Forum, the Embassy of Switzerland in Ukraine and the Polish Institute in Kyiv. The festival’s inclusivity is supported by Oschadbank and Mastercard.