Audrius Stonys: “I wish to film people who are independent of the system” 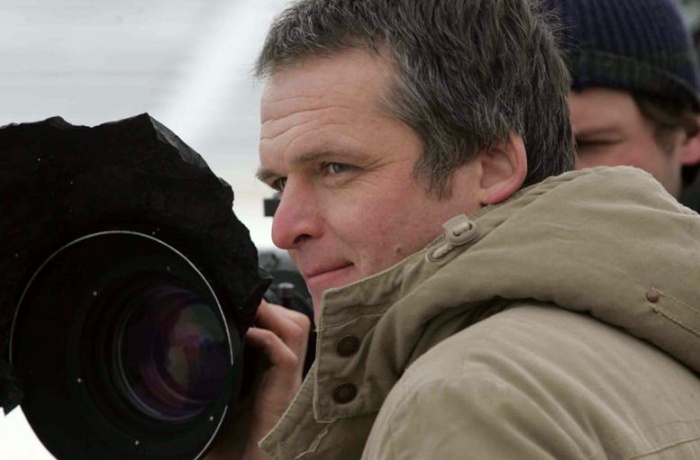 Audrius Stonys may be called one of Lithuania’s most renowned filmmakers. His Earth of the Blind was named best film of the year and won a Felix – the European Film Award. During the last twenty years, as an independent filmmaker and producer, Audrius Stonys has made 20 films. Each film is a unique contribution to a specific film language that the director is creating; each film mirrors his poetic perception of reality. At Docudays UA, Audrius Stonys will not only judge the competition’s films, but will also present his own retrospective and will hold a workshop.

Actually, I didn’t want to be a director. My parents were actors, and so I spent all my childhood at the theater, where I thought I belonged. However, it didn’t happen as I planned: at the time I was entering the university, there was no acting course, so I got into a television directing course with a hope of transferring to an actors’ course some day. At the same time I met my teacher Henrikas Šablevičius, an outstanding Lithuanian documentary maker. And it became clear at once that I didn’t want to act, or to have anything to do with fiction films. I was spending nights in the cutting room – assembling other people’s material, pieces of films by other directors, I was amazed at how it was possible to tell my story with other people’s clips. This became the basis for everything that I do now.

Sometimes, feature films are a document of their time. And vice versa, there are documentaries that are hard to call a document. I would like to invent something different, let’s say, reality films. In fiction films, I create a world from my imagination, while in documentaries I just observe the world and perceive what reality presents. My fantasy has its boundaries, while the world around me seems to be boundless. This is the essence of documentary filmmaking – be amazed all the time, open up things that are close to you, but at the same time hidden.

I am very open to different influences, I am influenced by everything that I see and feel. All of it becomes a part of my inner world. Andrey Tarkovsky’s films are not just films for me anymore, they are a part of me. Or the films of Béla Tarr. The art, music, books that I read – they all change me in some way, change how I see the world, and together with this, they change my style. Every director is a lens through which an image is refracted, because we are not just security cameras that are placed on gas stations. In everything that we see, we reflect ourselves. A lot depends on our state. I wouldn’t be able to make my old films now the same way as I have, because I have changed.

I always wished to film people who are independent of the system, they are more interesting for me. Why do I film only old people and children? Exactly because they are outside the system, they know how to find their own world. Just like blind people, or that grandmother in Uku Ukai, who runs, or Ramin, who lives in a separate world. When I look at such people, I do not feel in them such a close connection with this world. They grasp my interest with a certain timelessness they have. How do you stand up against changes, create your own refuge, your own world?

My characters do not try to stand apart from the system or avoid it. They just live outside of it. Children preserve that state, when they still remember the boundlessness that existed before they were born. And old people are headed towards eternity, and they feel it very well.

My characters are always surrounded with pots, buckets and cats. All of these things are part of their story. This is not just a chair – a thousand people sat on it. When I show it, it is obvious, and no other words are necessary. It is possible to tell a person’s entire story with words, but you can also do it with a pot, a mug or other things that surround this person. The essence of films is not in words.

In film, you need to treat reality as a puppy, it needs time to become housetrained. The method of documentary film is observation. Very long and careful observation. Prior to filming, the cameraman and I take long walks and talk about different things, sometimes even about things not connected to film.

I had a moment of catharsis, when I was filming the final scene in Alone. There was a flock of birds on an islet, nothing special. This islet is located next to one of the main highways in Lithuania, all people pass it, everybody has seen this place many times. We went there with my cameraman, saw these birds. And then set the camera for 32 shots per second, opened the aperture a little bit more than usual, and these birds started glowing. I noticed that, and I was very surprised at how the camera can transform reality, making something unusual out of usual things. In every film there is such an occasional moment that surprises you.

When filming Uku Ukai, my original idea was to create a satire on people’s stupidity, on all of these worthless attempts to make one younger, trying to stay forever beautiful and healthy. I was going to make an angry film. However, when I started filming, I understood that I too was a victim of the power of time. All people are trying to enter eternity, run away from old age, one way or another. That is why this film didn’t become a denunciative one, the kind that would mock people’s stupidity. Rather, it became a contemplation of what the human body is, how fragile it is, and how fast it fades away.