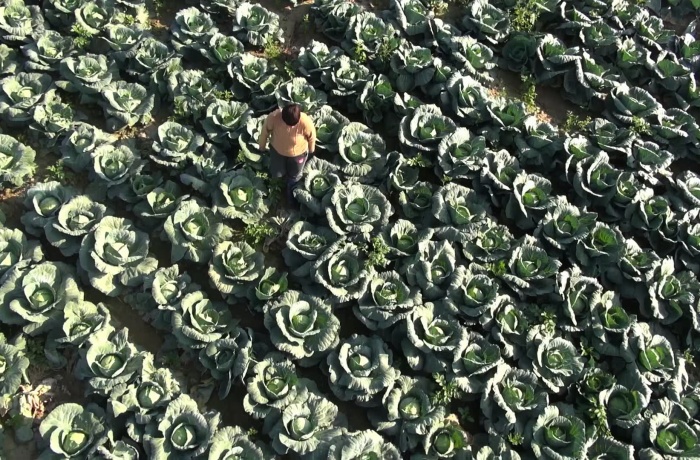 Production-market-consumption – all the characters from the films included in the GENERATION C. (CONSUMPTION) programme are trying to escape from this vicious circle with varying degrees of success, but their attempts are heart warming all the same.

Cabbage, Potatoes and Other Demons – a cinematic weed that grew from an ordinary trip to the market. Once upon a time, the Romanian director Șerban Georgescu went to buy cabbage for his mom. He went outside the city, of course, because it is cheaper. That is where he encountered the Kafkaesque absurdity of the farmers’ wholesale market. As it turned out, giving the merchant 10 euros and asking for all the cabbage this money can buy was very imprudent, because the director received 250 kg of quality cabbage that he barely managed to stuff into his car, while the market was abuzz with the whispers of the incredible stroke of luck that had blessed the cabbage merchant. At a complete loss as to what was happening and how this was possible, Șerban decided to rent a hectare of land from a local farmer in the small town of Lungulețu in southern Romania and try to live according to the traditions and production rules of local farmers. His goal was to understand how they manage to make ends meet, if in the end they were forced to sell their produce for nothing, thus slowly performing a sophisticated economic hara-kiri. And this was just the beginning of a phantasmagoric immersion into the paradise of potato and cabbage growing and the hell of market and sales. This tragicomic comment on the social trauma of an entire society whose way to prosperity and success somehow went fantastically wrong is far too painfully reminiscent of our own. The heroic story of the director’s downshifting looks like a big old trick for the cameras – a fiction, a con, because the fact that people really live like that, producing a product to just basically throw it away, is impossible to believe.

If you watched the post-apocalyptic Snowpiercer (2014), then the revelation of the film Bugs regarding the future of the human diet will not seem very odd. From the very beginning, this film says that in just a little while our daily diet is not going to be much different from the protein pellets made from insects that were fed to the slaves in Snowpiercer, whose social metaphor adopted the image of a train, aboard which the last people in the world went in circles through the Earth’s devastated surface. But Bugs does not reach such pessimistic conclusions. At least the film makes it clear that insects can be quite tasty – you just need to know how to cook them. Of course, all the world’s insects will be banned from watching this film, as it is full of violence and cruelty towards them, but to homo sapiens it will look like gastronomic research that aims to expand the ways of tantalising our taste buds. We see the members of Nordic Food Lab, a Danish non-profit organisation, as they travel the world and enjoy a meal of ant eggs in Mexico, roast a freshly caught termite queen in Uganda, and gobble up fat worms extracted from tree roots in Australia. But from the way they describe the tastes they are experiencing, Bugs is not very scary to watch – quite the contrary. Besides, most of these products are delicacies in their countries. However, beyond its educational value, this film grows into something more than adventurous gastro-tours. It is not only an unconventional look at what we eat. Its characters are, in some ways, naive romantics who want to change the very approach to food consumption in modern society and make concrete steps towards realising their dream. But despite this, Bugs is perhaps the most sceptical of all three films towards the system of consumption as such, and the most dramatic, since one of the characters experiences an unpleasant epiphany during the filming.

Where Bugs ends, the Estonian film Out of Fashion begins. Its heroine, the fashion designer Reet Aus, is working in a conscious protest against modern ‘fast fashion’, the uninterrupted oversaturation of the mass fashion market. Her choice of resistance is upcycling – i.e. recycling clothes and fabrics that have already been in use. But although this has been a big trend in the recent years, its market share is almost non-existent and holds just a fraction of the percentage of the total production of clothing. This means that to fight the monster you must first thoroughly study it. Out of Fashion, which was in production for five years, begins as a documentary detective story in which the heroine tries to find out, in the technological and ecological sense, what exactly a typical piece of clothing from the mass market is – for example, Zara jeans costing €20. By whom, from what, how and where were these jeans made? We see a Peruvian family who have been growing cotton on their 7 hectares of land their whole lives, the notorious sweat-soaked Bangladeshi factories where labourers break their backs for $8 a month, and the New York office of PVH (which owns the Tommy Hilfiger and Calvin Klein brands), where nobody has any idea how their clothes get made. However, this film doesn’t have any accusatory pathos. Its most attractive feature is its constructiveness. The task that the heroine sets for herself is to study the system and understand what is wrong with it. But the strangest thing about it all is that she manages much more – she finds an entry point into the cycle of production that spins at a nauseating speed, doesn’t spare a single thought for anyone else, and does her small but important work.