We live in an era of global consumption where the rate of consumption is increasing exponentially. It’s no secret that the fashion industry is at the forefront of this consumption race. Thousands of factories in the Third World produce not only clothing for big corporations, but also tons and tons of toxic waste. Fashion designer Reet Aus has an ambitious plan to change the world. Aus has realized that the only way to fight against the fashion industry is from the inside. 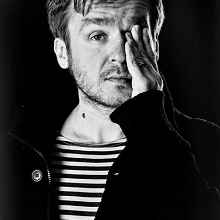 Jaak Kilmi ​graduated from the newly-formed film school of Tallinn Pedagogical University. He has directed numerous short films and award-winning documentaries (‘The Art of Selling’, ‘Disco and Atomic War’, etc.) and two feature films (‘Meeting with the Unknown’ and ‘Revolution of Pigs’). He has been a member of FIPRESCI since 1995.

Lennart Laberenz​ has MAs in history, philosophy and political science. Since 2005, he has worked as a freelance filmmaker, author and journalist. His documentary films and television reportages have screened in German and European television stations and international documentary film festivals. From 2008, he has also been working with theatre productions in Europe and South America.

Selected: Crackle of Time –Christoph Schlingensief And His Opera Village in Burkina Faso (2012), Out of Fashion (2015)