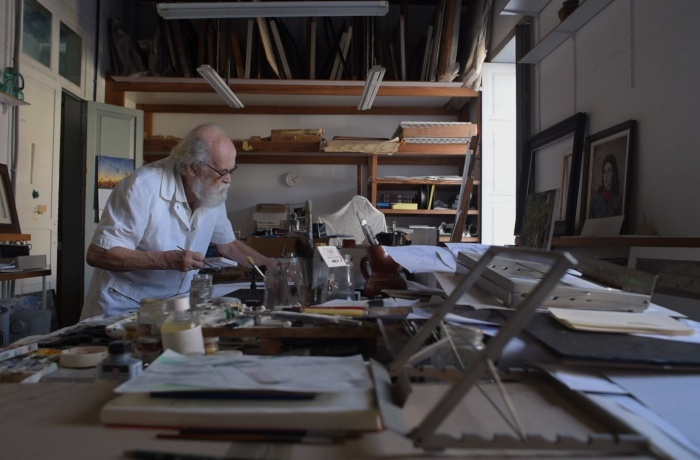 Cinemas, cultural centers, clubs, and libraries have been closed for a while. The coronavirus crisis exacerbated the question of social priorities, where culture and art have been left behind once again. What is the role of art when you can not see it together, at times of funding cuts and worsening of social inequalities? This year, the DOCU/ART programme will seek answers to the acute questions for the art field. Festival programmer Yulia Kovalenko reflects on them in the programme review.

What is the art and why humanity needs it? In pre-pandemic times, this question was raised in introductory classes on the basics of art history but it was not new, because the answers could be found in numerous books. However, the coronavirus has become a rigorous examiner who was forcing humanity, among other challenges, to revise the status of art in public life during the past year. Closed galleries and cinemas, canceled concerts and performances, the institutional crisis, and the transition to online format: pandemics have shown that both specific industries and the fate of individuals depend on our understanding of the simple question "what is art?."

Is art a necessity for society in challenging times? Is it necessary to support art in critical conditions for humanity, or is it the "entertainment superstructure" that should be abandoned for a while? Where is the border between "meaningful" art and "meaningless" attraction? And why do we need art, why should we think and care about it, when we have gotten enough challenges already? Each country had to answer these questions independently, but this is the exam where copying a neighbor is allowed. However, while some countries created special funds for compensation and programmes to support artists in the midst of the fight against Covid-19, others seemed to see an art industry as a ballast that must be urgently dropped. Confident voice of Federal Government Commissioner for Culture and the Media, Monica Grütters moved many with her defense of the creative sector: "Culture is not a luxury that can be afforded only in good times." The others, including Ukraine unfortunately, floundered in thoughts, unclear results, and comments by public officials such as "we will be understood" if we refuse to finance cinema in favor of large-scale hospital construction.

So is it luxury or not? Is it an integral part of society or optional entertainment? Avoiding dogmatic answers, the films of this year's DOCU/ART programme each in their own way problematize the nature and role of art in the life of modern individuals and society as a whole.

How important is art in our daily lives? Can the artwork save someone's life? The Last Archer by Dácil Manrique de Lara Millares begins as a tender film about the director's grandfather, a surrealist artist from the Canary Islands who began an entire art movement. Despite the expectation to see a film-portrait of the painter, the film gradually becomes a vivid testimony to the ability of art to heal, to resist physical illness, treat psychological trauma, or provide vitality in difficult times. In the middle of everyday life flow, fictional weightless worlds on the canvases become for the director a private source of reconciliation with her difficult past and confidence in the present.

Where is the border between art and attraction, and how free is contemporary art? Is art today an important way of critical thinking or just entertainment drove by audience demand? Reflecting on these questions Marc Isaacs makes an ironic hybrid film The Filmmaker's House about the filmmaker, who in turn tries to make his film about the real problems in society: intolerance, indifference, alienation. However, it turns out that investors are not very interested in these issues: to get the funding you need brighter "birds", like stories about murders, sex, or celebrities. While the film is looking for inspiring motives in the daily lives of guests in his house, we imperceptibly face the question Isaacs asks us: "What is documentary: an excerpt of harsh reality, pulled out by a camera, or director`s manipulations that pretend to be a reality?"

What is the place of art in society in the age of the Internet? Why do we need cinemas if there are streaming platforms? Can the cinema still offer something we won't find in vlogs? In short, what is the general role of art today? Forensickness and Watching the Pain of Others are two witty film investigations by Chloé Galibert-Laîné, which unfold within her laptop. Both begin as detective stories that trace another film. In the first one, the director unravels Watching the Detectives by Chris Kennedy, dedicated to the amateur investigation of Internet chat rooms users immediately after the Boston Marathon bombing. With the help of various open data, Internet activists are looking for the culprits. The director's second detective story revolves around Penny Lane's The Pain of Others, a documentary about people with diseases so rare that even doctors don't believe in their symptoms, so the patients have no choice but to share the pain in the vlogs. However, in the end, both of Chloé's films come to a common denominator, understanding the very nature of cinema in the modern world. Understanding what still makes us come to the cinema and gives us the joy of watching stories on the screen, understanding cinema as a kind of space for critical thinking, resisting the dominance of images produced by the media.

All the films from the DOCU/ART programme will be available to watch in the DOCUSPACE online cinema.

Main photo: a still from the film The Last Archer.

18th Docudays UA is supported by the Embassy of Sweden in Ukraine, the Ukrainian Cultural Foundation and the Ukrainian State Film Agency.