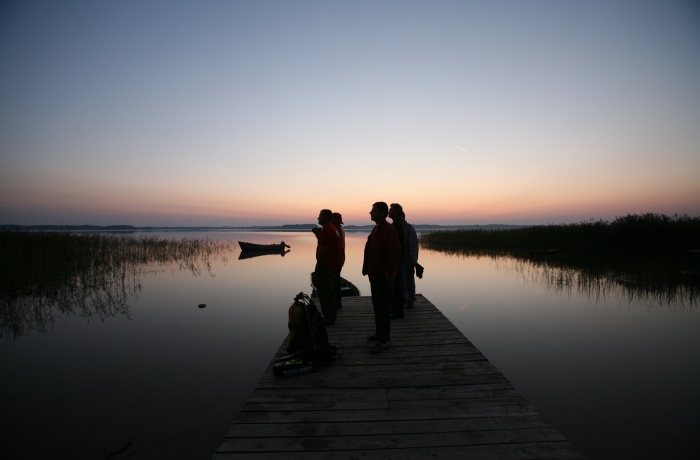 The second part of an interview with a famous Lithuanian director, a DOCU/LIFE jury member.

Old age, blindness or disability are not defects. I often think of them as a kind of a gift. True, these people may not have eyes, but they see and feel, perceive life through other channels, sometimes even more acute and interesting, than we do with our eyes. Old age is interesting altogether. In reality it only frees us from our body. Arrogance, pride, passion – they all tie us down; in old age, all of it disappears and other things come.

Both good and bad people are too shallow. The really interesting ones are those characters who have everything in them, broken people who cannot find something in this life. Each of my characters is broken in a certain sense.

My films belong to people. Everyone watches them in their own way. If they belonged to me only, I wouldn’t show them to anyone, or I would travel with my films and would protect them, correcting any faulty understanding of my films among people. Yet the films are given to the audience, and they have the right to do with them what they want, what they are ready for. The author dies with the last shot of his film.

Images are always less aggressive than words; images leave more freedom. Indeed, words can be interpreted, but these interpretations are very limited. When I show a tree, it can be interpreted in any way. Some people will think that it is a symbol of Lithuania, others of a person, yet another that I am speaking about nature. In Uku Ukai there are such shots – going through a person’s skin, the landscape of skin. For me it was charming. I thought how beautiful a human is – its body, its crevices. At the same time, this landscape was looked at by my friend, who was about 70 years old, and he said that a human was disgusting and scary with all its hairs and wrinkles, and how scary it was when the body aged. But this is exactly what I like – that the same image can be seen differently. Words are narrow in such an artistic understanding, while poetry always leaves a space. Poetic language, both in literature and in films, is the language of their breath.

I feel more responsible to my characters than to my audience. I communicate with my characters, live with them; in many cases they think that their life will change in some way, but then I move on and leave them. I see this ethical problem. But if artists were afraid of hurting someone, they wouldn’t create anything.

In evaluating films the main thing for me is how much pure film there is in a documentary, whether the art of cinema itself is alive in it, because, in my opinion, today this art is in danger, it has been very much assimilated into television, the media. In films I am always looking for film, and it makes me very happy to find it. I dislike when documentary films become similar to investigative journalism. In the first place, films are imaging.

People mostly associate documentaries with information, with a stream of information. That is why it is still a festival genre. This approach is faulty; for this reason, documentaries do not meet their expectations. In this sense television is more flexible, it is faster. Documentary films are awkward, they take a long time to film, then they take a long time to assemble, then there is postproduction. If you expect the same things from documentaries as from television, then the latter will always be more popular. People need to understand that the aim of documentary films is very special and it poses certain requirements – to grasp reality and see its multiple layers.

I am trying to run away from Stonys all the time, I try to make each film different. If you watch my films one after another, you will notice these attempts. I’ve experimented a lot, I’ve shot films with talking heads, films with no words, films with a thousand words, archive films. Currently I’m working on historical films. And yet my films are still like me. I am still there, in them.