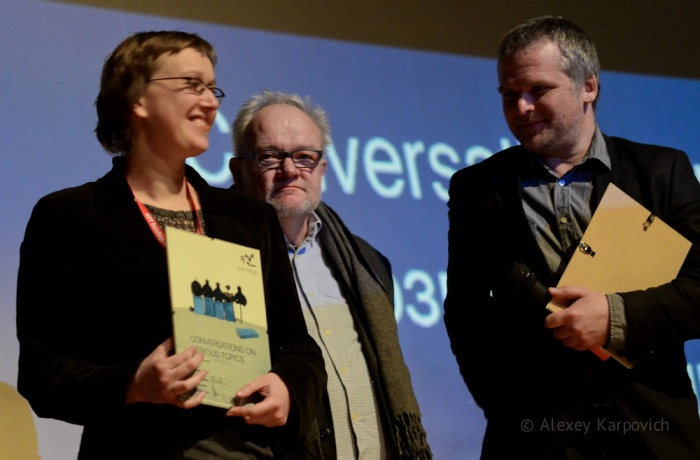 10th International documentary films about human rights festival has ended in Kyiv. On the March, 27 in Cinema house awards ceremony was held. Like previous years movies  were competing in three competition – DOCU/LIFE, DOCU/RIGHT and DOCU/SHORT, and for the special prize from students’ jury. After the ceremony an award-winning film in DOCU/Life competition ‘Conversations on serious topics’ was shown.

Award-winning movie ’Conversations on Serious Topics’ (Dir. Giedrė Beinoriūtė, Lithuania) is a film without external action, requisite, landscapes, or special effects. Main characters  are children and teenagers from 8 to 16, who describe everything surrounding them in a specific way. Filmed with a spirit of minimalism, this movie concerns the themes of loneliness, love, God and human relationships.

Films ‘Noosfera’ (Dir. Artchil Khetagouri)  and ‘Documentarian’ (Dir. Ivars Zviedris, Inese Kļava, Latvia) got special awards from DOCU/Life competition jury. ‘Noosfera’ – is heartwarming and very private of Niko the eccentric, who brings his opinion on future of world and love as scientist and pedagogue, trying to apply his theory in his own life. ‘Documentarian’ is a cheerful and smart movie about cinema which touches on the question of mutual connection of  filmmaker and a hero.

The winner of Docu/short became movie ‘Pouters’ from Paul Fegan , Scotland. About a thousand Scots, mostly men, organizing a ‘pouters escape’, turning it to competition. This sport is popular mostly in poor regions of the country. Heroes of this short are two men living in workers’ area of Glasgow. Reb and Danny are competing furiously for 25 years to the moment.

‘The Girl from the South’ (Dir. José Luis García, Argentina) won DOCU/Right competition. This is the movie about young activist, who arrived anonymously in 1989 from Seoul to represent South Korean students, who demanded peaceful reunion of the nation. Twenty years later director cannot forget broken illusions of his youth, so he’s on his way, recalling ‘Reunion Flower’.

Special award for passionate optimism and upholding the ideals of humanism in life received film ‘The Punk Syndrome’. The heroes of this movie are the members of the coolest Finnish punk-rock-band Pertti Kurikan Nimipäivät. Perti, Kari, Toni and Sami in spite of shortcomings of their mental health perform their music proudly and passionate. Directors with musicians pass the way from unknown weird to wide popularity.

Main prize from Students’ Jury received ‘Documentarian’ movie For the love of its subject, the documentarian’s self-mastery and boldness in filmmaking in unexpected circumstances.

Docudays UA team honored with a special prize named after Andrii Matrosov Ukrainian debut ‘Sirs and Misters’ from Olexander Techynsky who discovered in his work an unusual Ukraine.