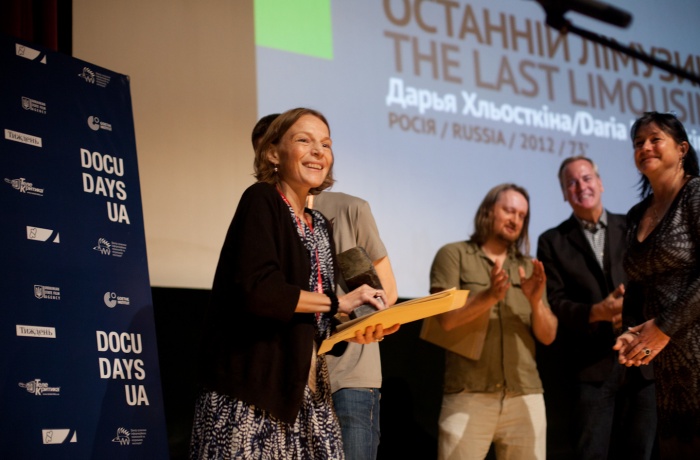 11th International documentary films about human rights festival has ended in Kyiv. The awards ceremony was held On March 27 in Cinema House in Kyiv. Hosts of the ceremony: popular journalists Nataliya Gumenyuk and Andriy Saychuk.

Films were competing for prizes in three categories: DOCU/LIFE, DOCU/RIGHT, DOCU/SHORT, and for the special prize from Students’ Jury. The festivals’ Orzanizing Committee favorite is awarded with the Andriy Matrosov Award. After the ceremony a DOCU/LIFE competition winning film was screened.

For a dignified, compassionate portrayal of state-factory workers lost in transition, but not in humanity. Perfectly casted, well crafted, and touching in its social, economic, and political absurdity.

For a visually and emotionally superior depiction of human resilience, sensibility, and interdependence.

For a provocative, atypical, allegorical description of industrial work and personal freedom.

For a highly sensitive, empathic, and artistic presentation of a controversial and socially resonant human rights problem, affecting the fates of women and children globally.

For the powerful use of video advocacy in global awareness-raising and opinion-shaping regarding the mass murders of civilians belonging to a Tamil minority in Sri Lanka.

For exceptional courage of the film crew and an outstanding presentation of international piracy phenomenon as presented by a victim and his prison guard.

For filmmaker's poetic sensibility and respect for other humans’ secrets.

For filmmaker's ability to be both intimate and discreet.

For ability of the filmmaker to find in the closed world of one apartment "things that quicken the heart".

For an optimistic story about a life-long passion

A Diary of a Journey (director Piotr Stasik, Poland, 2013)

The screening of award-winning films is scheduled for 4 pm at March 28 (Cinema House, Red Hall).