Faces of Freedom. The Maidan 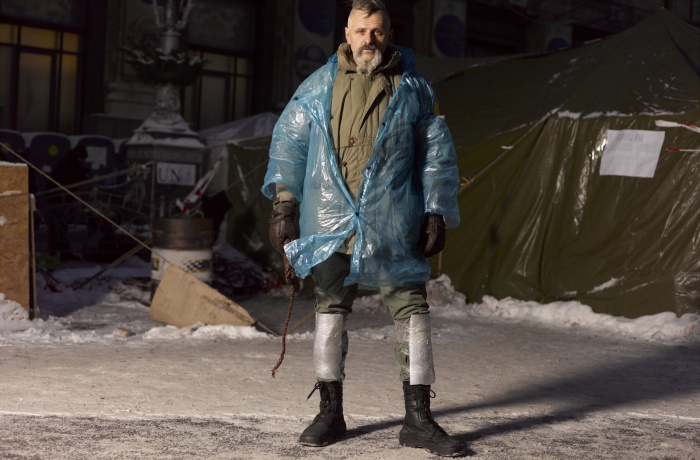 Today, hardly anyone remembers that in the nineties, the Kyiv photographer Igor Gaidai was closely associated with advertising photography. Since he left the commercial world and started shooting his own personal projects, he has focused on portraits, often devoting several years to a single series. In particular, the project The Ukrainians. Beginning of the Third Millennium, which has now been published as a book and includes over 130 portraits of today’s inhabitants, from a shepherd to the President, took Igor seven years. Among his collections that have often been exhibited in Ukraine and abroad is RAZOM.UA, a series of large-scale group portraits in which hundreds of people participated simultaneously. Docudays UA met Igor and Nina, his wife and assistant, in the midst of the revolution of dignity to talk about their new project Faces of Freedom. The Maidan.

Igor, what prompted you to investigate Ukrainian identity in the Maidan?

It isn’t a study of identity. As a member of the community, I just couldn’t remain aside. I consider myself to be a member of the Maidan, and I was taking pictures of my associates. This is not a view from a distance – I’m curious to look at them through my own self. Previously I used to shoot very different kinds of people, and sometimes I photographed not just those who I personally liked.

This time it’s emotional. To me these are people as individuals, and together they create an image of true freedom. On the Square one keeps hearing a phrase whose meaning I don’t have to think twice about: ‘Glory to Ukraine! Glory to the Heroes!’ So, the longer I live with the Maidan in my heart, the more meaningful these words become.

How do you choose the characters? Because there were thousands of people...

The Maidan is very colorful, but above all I wanted to avoid making it look like a pageant. The first surprise for me was that I could not refuse to use color (typically he photographs in black and white – N.D.). Independence has shown itself in colors to me, I think it’s because of the national flags. And secondly, I had no clear criteria for my shot selection. Once you start dwelling upon it, then there is no-one: just people coming and going, and no-one catches your eye, but then you see them – one, two, three, and all of them are good! That’s the format of street fashion, and so it becomes Maidan-fashion: those helmets, the flags on their shoulders!

Mostly we were shooting strangers, but then we began to look for certain characters. It was just the first month, but it had already felt like such a long time. There was a man whom I call ‘the 31st day’. And he said, “Today is the 31st day I’ve been standing here.” Then no-one knew it would be even 51 days, and 61 days...

How do people react to the camera? You’re actually interrupting them as they are going about their business...

I think most people agree that this is an outstanding moment in life. They have a feeling that now they will make history, the modern history of the state. My pictures are taken very simply: I catch people in the mood and in the environment where they are, I don’t even change the background. Each individual photograph may not have a value in itself, but I’ve documented a historically important moment for the country.

Ukraine gained independence as a gift, without a struggle, it just happened. The pig cops, gangsters, communists – they all changed their colors, they were granted a separate principality by Muscovy, and they started to build a criminal state, although they had to camouflage it; and this disguise gave us a pro-European vector, opening the borders, allowing people to move freely. But until the generation of young people of an independent Ukraine grew up, all the gangsters managed to preserve themselves. I think that these young people don’t want to have medieval politicians, these parents and godfathers. They are not too traumatised by the theft, but they cannot exist without freedom. The Maidan is the face of freedom.

Have you been able to communicate with the people whose pictures you took?

In different ways. So today we shot on Hrushevsky Street, where only tourists can afford to stay, and there were really a lot of them.

We call this phenomenon ‘political tourism’. Even while the Maidan was peaceful, lots of people came to be photographed against the backdrop of the barricades.

With the big ‘Christmas tree’ in the background! I took my first shots there too.

Since the harassment and persecution of the Maidan activists started, have people become more cautious in their attitude to photographers?

First, we wrote down our names, phone numbers, Emails, and now we even offer to wear masks. We started by photographing doctors, because the real hunt is following them.

“Today, we photographed one guy in a mask,” adds Nina Gaidai. “We had even taken the first shot, and then he tore it away and said, ‘No, I want it this way!’”.

“The atmosphere on the Maidan is very free and outspoken,” Igor continues. “Transparency is the feature which unites all those people. I understand that there are very different people there, but in this environment, I think I’m much more among my own people than I am in everyday life.”

How many portraits have you taken?

“Really?” says Igor in surprise. “I didn’t think there had been so many. I remember almost every story.”

Do people ask for souvenir photos?

Most interestingly, no. Some wondered where they could see them. Because Nina walks around with a flash, most believe that we’re from TV, and they come up to be interviewed.

Have you gathered a lot of material? Do you want to put out a whole album?

We want to, yes. But the selection will be extremely difficult. Somehow I don’t want to throw anything away, even when the photo is not very good, because they were such nice people. But you have to be a minimalist – by giving out the pictures to your subjects, the people stay in your heart. Professional relationships can’t substitute for civic determination and a personal attitude.