Clashes in Kyiv kill dozens as protesters cling to square 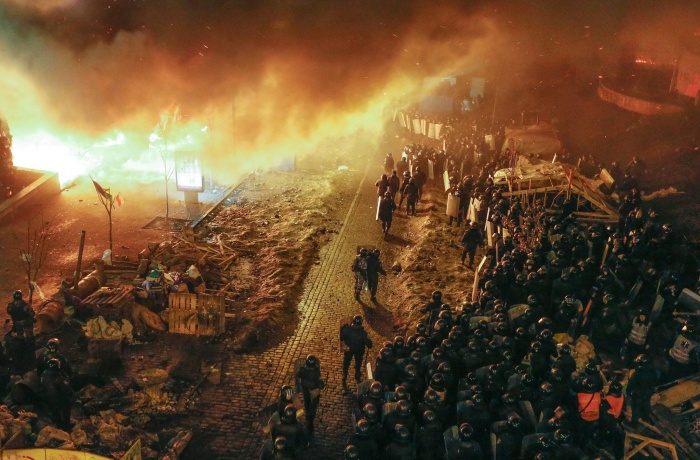 KYIV, Ukraine — Protesters in Kyiv stoked what they are calling a “ring of fire” separating themselves from the riot police in a desperate effort on Wednesday to defend a stage on Independence Square that has been a focal point of their protests and to keep their three-month-old movement alive.

Men staggering with exhaustion dismantled the tents and field kitchens from the movement’s earlier and more peaceful phase and hauled their remnants onto the fires. They piled on mattresses, sleeping bags, tent frames, foam pads and whatever else looked flammable, burning their own encampment in a final act of defiance.

Ukraine’s Health Ministry said that 25 people, including police officers, protesters and a journalist found dead on a side street near the square, had been killed after hundreds of riot police officers advanced on the antigovernment demonstrators Tuesday and in subsequent fighting on streets in the government district of the Ukrainian capital.

As the scope of the violence became clear, Russia, President Viktor F. Yanukovych’s ally in the crisis, issued a blistering statement blaming the “criminal activities of radical opposition forces” for causing the bloodshed and denouncing European countries for refusing to acknowledge that. When the protests began late last year, they opposed the government’s rejection of a trade agreement with the European Union.

The statement on Wednesday from the Foreign Ministry described the violence as an attempted coup and even used the phrase “brown revolution,” an allusion to the Nazi rise to power in Germany in 1933.

The ministry said Russia would use “all our influence to restore peace and calm.

President Vladimir V. Putin’s spokesman said that the Russian leader had spoken by telephone with Mr. Yanukovych and expressed support for a swift settlement, but said it was up to Ukraine’s government to resolve it without external interference. “In the president’s view, all responsibility for what is happening in Ukraine rests with the extremists,” Dmitri S. Peskov, the spokesman, told reporters, according to the news agency Interfax.

On the other side of the barricades in Kyiv, scores of exhausted riot police officers, their faces covered in soot, sat slumped on the sidewalk on Khreshchatyk Street, the main artery leading to Independence Square. Reinforcements poured in, massing in European Square, a large roundabout that sits astride main roads leading to the center of the city. One of these was clogged with around a dozen military-style dump trucks, armored cars and other vehicles.

But it was unclear whether the authorities had mustered sufficient force to complete the operation they began on Tuesday to clear Independence Square. The security forces did, however, strengthen their grip on the Ukrainian House, a large modern building that had been occupied by protesters. Police officers carted out sacks filled with documents and others with garbage.

Outside of the capital, protesters had again reportedly stormed provincial administrative buildings in several regions, including Lviv, a bastion of anti-Yanukovych sentiment in western Ukraine near the border with Poland.

Andriy Porodko, a 29-year-old antigovernment activist in Lviv, said by telephone that protesters had taken control of the central government’s main offices in the region, resuming an occupation that had ended last Sunday, and had also raided the local headquarters of the state prosecutor, the Ukrainian security service and several district police stations.

Most ominously, said Mr. Porodko, who last month organized a blockade of an Interior Ministry garrison on the outskirts of Lviv, around 1,000 protesters had stormed the garrison, which serves as the headquarters of the Interior Ministry’s western regional command, seizing control of barracks and weapons stores. In addition, a local journalist said that around 140 guns were seized from Lviv’s central police station.

In Kyiv, the fires kept security forces and their vehicles away from the stage as police seemed unwilling to risk driving through the blazes. It was unclear how long the debris of the protesters’ tent camp could fuel the bonfires sufficiently to prevent an assault by security forces.

The flames from the barricades defended the entrances to the square where riot police officers were pressing forward but not streets leading from the plaza. The authorities appeared to be attempting to push the protesters out through those exits.

With the center of the city engulfed in thick, acrid smoke and filled with the deafening noise of grenades, fireworks and occasional gunfire, what began as a peaceful protest in late November against Mr. Yanukovych’s decision to spurn a trade deal with Europe and tilt toward Russia became on Tuesday a pyre of violent chaos.

The violence, which will resonate for weeks, months or even years around this fragile and bitterly divided former Soviet republic of 46 million, exposed the impotence, in this dispute, of the United States and the European Union, which had engaged in a week of fruitless efforts to mediate a peaceful settlement. It also shredded doubts about the influence of Russia, which had portrayed the protesters as American-backed “terrorists” and, in thinly coded messages from the Kremlin, urged Mr. Yanukovych to crack down.

Vice President Joseph R. Biden Jr. telephoned Mr. Yanukovych to “express grave concern regarding the crisis on the streets” of Kyiv and urged him “to pull back government forces and to exercise maximum restraint,” the vice president’s office said in a statement on Tuesday.

Secretary of State John Kerry urged Mr. Yanukovych to stop the bloodshed. “We call on President Yanukovych and the Ukrainian government to de-escalate the situation immediately, and resume dialogue with the opposition on a peaceful path forward. Ukraine’s deep divisions will not be healed by spilling more innocent blood,” he said in a statement.

The German foreign minister, Frank-Walter Steinmeier, warned the Ukrainian government that it could face sanctions.

“Whoever is responsible for the decisions which have led to the bloodshed in Kyiv and other parts of Ukraine should expect Europe to reconsider its position on imposing sanctions on individuals,” Mr. Steinmeier said in a statement on Tuesday night. The bloodshed erupted only hours after Mr. Steinmeier had received the two main opposition leaders, Vitali Klitschko and Arseniy P. Yatsenyuk, in Berlin, where they also met Chancellor Angela Merkel.

The State Department, in an alert to American citizens, said that travel into and out of the center of Kyiv was restricted and described the situation as “currently very fluid.” It also warned that roving gangs had attacked journalists and protesters and committed other random acts of violence in Kyiv and other cities.

“U.S. citizens whose residences or hotels are located in the vicinity of the protests are cautioned to leave those areas or prepare to remain indoors, possibly for several days, should clashes occur,” the notice said. “Further violent clashes between police and protesters in Kyiv and other cities are possible. The location and nature of demonstrations and methods employed by the police can change quickly and without warning.”

Mr. Yanukovych had repeatedly pledged not to use force to disperse protesters, but after meeting Mr. Putin at the opening of the Winter Olympics in Sochi, he had clearly changed his mind. The fighting also broke out only a day after Russia threw a new financial lifeline to Mr. Yanukovych’s government by buying $2 billion in Ukrainian government bonds.

The Russian aid appeared to signal confidence that important votes in Parliament expected this week, to amend the Constitution and form a new cabinet, would go in Russia’s favor.

The shift in Mr. Yanukovych’s thinking and tactics will silence what had been chants night and day from Independence Square for him to resign, but it will by no means guarantee his future grip on power in a country that, despite its deep divisions rooted in language, culture and huge disparities of wealth, prides itself on avoiding violence.

Even one of the president’s most stalwart supporters, the billionaire businessman Rinat Akhmetov, Ukraine’s richest man, seemed distressed by the president’s decision, warning in a statement on Tuesday that “there are no situations whatsoever that vindicate the use of force against a peaceful population.”

With opposition politicians and other protest leaders vowing defiance late into the night from the stage at the center of their crumbling encampment, it was unclear how long even the greatly feared and detested riot police could hang on to Independence Square in the event that residents poured into the area.

Mr. Yatsenyuk, one of the opposition leaders who met with Ms. Merkel, on Tuesday night delivered what could have been his final speech from the stage, known as Maidan, in Independence Square, at least for some time.

“We see that this regime started shooting at people again. They want to drown Ukraine in blood,” he shouted. “We won’t react on a single one of their provocations. But we won’t make any single step back from here, from this Maidan.”

Some protesters acknowledged that they had contributed to the violent spiral of events by attacking police officers during street battles early in the day near the Ukrainian Parliament, which the opposition had hoped would approve constitutional amendments curbing President Yanukovych’s powers.

“We have no other way,” said Lena Melniko, a 33-year-old accountant who joined a team of protesters digging up paving stones and passing them on to fighters to throw at the police, “We have been protesting for three months but are stuck in a dead end.”

Throughout the day, opposition leaders urged protesters to stand firm in a series of defiant speeches. “We will come out of Maidan either free or slaves. But we don’t want to be slaves,” said Serhiy Sobolev, a member of Parliament.

Older women clustered on the sidewalk and heckled the police, yelling, “Killers!” and “Shoot us! Just shoot us, kill us, kill us, you bastards!”

Petro Poroshenko, a wealthy opposition member of Parliament whose television station has been broadcasting the protests, called for discipline and defiance. “We are here not simply protecting Maidan, we are here protecting Ukraine,” Mr. Poroshenko said, urging residents to converge on the square. “We are not simply staying here for the future of Kyiv. We are standing for the unity of Ukraine.”