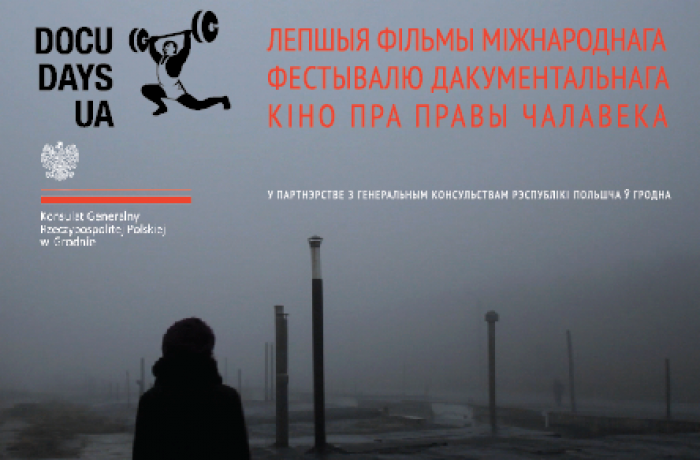 Best films of the International Human Rights Documentary Film Festival will be shown on June 10 – 11 in the town of Grodno, Belarus. All screenings will be held at the cinema hall of the General Consulate of the Republic of Poland in Grodno (48A Budzyonaga St).

All screenings are free!

The Partner of screenings is the General Consulate of the Republic of Poland in Grodno.

Imagine a space where time has frozen. Time has stopped here and life's got stuck in a shape resembling the era of the Soviet Union. Somehow, people have become used to the reign of the secret police and the fear of being spied on. The Transdnistrian Moldavian Republic. The Soviet-style propaganda of the authoritative, power-based regime of President Igor Smirnov has turned most of the TMR residents into simple workers, without any desire to understand how unbearable their situation is. Smirnov has been leading this non-existent country for as long as twenty years. The film focuses on a couple of characters who are stuck in this geo-political gap, between the European Union and Russia, between the present and the past, crime and decency, decadence and hope for change. Framed by the period of the presidential election, the film analyzes the organization of the ‘non-state’ and the rules of everyday life within it.

Faced with the relentless demise of the factory they work at, Mikhail, Andrey, Nina, Vladimir, Nadia and Luda – bosses, foremen, engineers and workers at the giant Moscow automobile plant ZIL – cling to their established routines and professional pride to stay upright in a world which is crumbling around them. When an order comes in to produce three of the factory’s legendary hand-made limousines, once the centerpiece of Soviet military parades on Moscow’s Red Square, Mikhail’s team of hand-picked specialists throws itself at the opportunity to show what they are worth.

6 pm ­– The Captain and His Pirate

Krzysztof Kotiuk, captain of the Hansa Stavanger cargo ship, was held hostage by Somali pirates for four months in 2009. Andy Wolff’s film follows him as he undergoes psychotherapy in an effort to come to terms with the experience, his sense of failure, and the attacks from rescued crew members who accuse him of having cooperated with the pirates. The pirate captain Ahado doesn’t need psychotherapy. After acquiring nearly three million in ransom, he has not lost the respect of his co-combatants; his lifelong experience of war simplifies any dilemmas he faces, and his mind is calmed by his constant chewing of khat. Paradoxically, the two men are linked by a mutual respect born during the kidnap. The film shows us two contrasting worlds, delivering unique testimonies from the main actors and revealing a lesser known side of international trade.

17-year-old Srulik is an Israeli youth of Ethiopian origin who has been kicked out of the educational system. He works cleaning floors, dreams about being a famous rapper and writes songs. His band, The Fiery Voices, tells the story of the young people in Shapira Neighborhood in the small town of Gadera, their lives and dreams. When the Ethiopians protest against the rise of racism, Srulik puts his feelings into words and gives the protest a voice.

A rare look at the interactions between inmates and wardens over a period of two years, the Neve Tirza prison for women in central Israel is the setting for a story seen through the eyes of three women: one Jewish, one Muslim and one Christian. Ethnic diversity is explored within the confines of tiny prison cells. These women are locked down and shut out from society – and from themselves. Strong and yet vulnerable, the relationship between the prisoners and the staff, and between the women themselves, is a mixture of collective distrust and mutual respect.