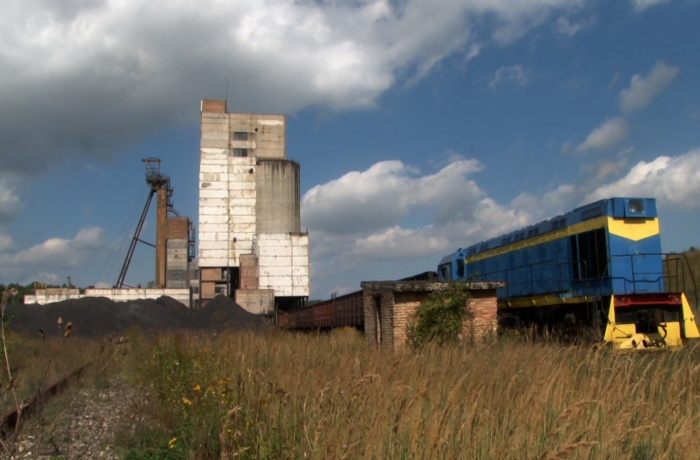 In Ternopil, on August 30-31, JUST-IN-BETWEEN festival will be held during which Docudays UA International Human Rights Documentary Film Festival will screen The Coal Miner’s Day (2013) by French director Gaël Mocaër about surrealism of daily life at Buzhanska coal mine in Novovolynsk, and Elektro Moskva (2013) – an essay on Soviet epoch and its legacy through the prism of history of electronic music and Soviet synthesizers.

between war and peace

between east and west

between summer and autumn

On August 30, just before the Miner’s Day, musicians, poets, artists, designers, and journalists from Kyiv, Lviv, Donetsk, Ternopil, Alchevsk, Luhansk, Ivano-Frankivsk, and other cities and towns will meet in Ternopil. Nowadays, when the war is on, and the tension in the west and despair in the east get stronger, this is an important event. Such meetings where people can share their thoughts and understand that we – so different and special – live in the same country, help find common ideas and remember that the war is not an aim but rather a means to win a new country for us.

The format of JUST-IN-BETWEEN (Bunkermuz, Taras Shenchenko blv. 1, Ternopil) has nothing to do with fun – it’s an experiment, an educational and artistic event. Therefore, it demands certain efforts – from the artists and the audience – and gives answers to certain questions that one can’t find on their own. This was one of the reasons to expect powerful projects emerging right in the course of the event – because the purpose of the meeting is co-creation.

As for the program scheduled so far, people from all over the country will come together to organize an exhibition, create an art object in the urban space, watch documentary and fiction films, attend a lecture on art and historic processes, see new Ukrainian multidisciplinary projects, participate in a discussion and noise lab, walk through the night streets of Ternopil, and go off to different parts of the country and work there – with the sense of unity through space and time.

Exhibition Zymno by a known Ukrainian artist, Myroslav Vayda. There also will be an act of installing an art object “Element of Unification” by Oleh Bozhko in public space; Bozhko is an artist and landscape designer from Alchevsk; his installation symbolizes memory, gratitude, and unity.

Film program, including Yuriy Illyenko’s Swan Lake. The Zone (1990) also filmed in Alchevsk – near Orlovy Stavky, currently the site of bombing. Docudays UA International Human Rights Documentary Film Festival will show The Coal Miner’s Day (2013) by Gaël Mocaër depicting the surrealistic daily life of Buzhanska coal mine near Novovolynsk with its holidays and troubles, and Elektro Moskva (2013) an essay on Soviet epoch, its legacy through the prism of electronic music and history of Soviet synthesizers. There will also be a pre-premiere screening of the documentary by Vadym Ilkov about “Rozdilovi” performance produced in May by Austrian, Belarussian, and Ukrainian artists at the ancient mansion in Luhansk region.

A lecture by Oleksandr Sushynskyi (curator at da_sein art venue and founder of the independent recording label da_sein_rec) Inventors Vs Acquirers on the interplay and mutual (in)dependence between artistic and historic processes.

Donbas is the world of apricots and waste heaps, tenderness and tragedy. Its space is not flat, it’s deep: people – inhabitants of coal-mining villages and towns - walk down the streets, and beneath them miners wearing caps crawl under the ground. Outside the sun is shining, apricots are ripe in its beaming light, and the lights from miners’ headlamps shine over the deaths of their colleagues. Musical improvisations by Mark Tokar playing his contrabass, that is able to talk in human language, deepen the impression of Lyubov Yakymchuk’s poem “Apricots of Donbas”.

The performance created especially for JUST-IN-BETWEEN reconsiders the issue of destructive pressure applied by media environment and personal attempts to resist it. They cut us off from the sea. They occupied our land. They closed the airspace. These are journalistic clichés deepening their meaning for those used to bathe in the sea, walk the land and plant flowers and trees there – touched it and breathed the air.

TALES FROM THE GREY NOTEBOOK

In his own texts, Mark Tokar appears to be quite musical wrapping in words the “things played with an instrument and occasionally illustrated with verbal sense”. The texts will be performed by the author to create – in Mark’s words – “spontaneous and rhythmic stream of consciousness in various languages.”

Two separate performances by new members of SИМБІОZ by Ternopil poets, artists, and musical formations that premiered in July at ARTPOLE.IF laboratory.

Integration of poetry, electronics, and experimental vocals. Fusion of electrically produced, prepared, and synthesized sounds with verbal art. A symbiosis based on opposition of power to weakness and rigidity to softness.

Visual and electroacoustic improvisation on Aleksandr Vvedensky’s absurdist poetry from 1920s. The state of MLYOR (doziness) is the state of melancholia, lack of something unforgettable, deeply rooted in the nature of time. The lack that makes you wake up. A moment of realization that “perhaps, the God is all around”. The performance is a simple manifestation of the case when a creative act is the act of opposing the war, uniting, transforming the conscience in an evolutionary way. It is an attempt to catch the state of MLYOR unknown for everybody.

NOISE LAB Session on the basis of musical environments like Pincet, Khatnyegrannya, and Subprodukt. According to its curator, Yaroslav Kachmarsky, it is a submersion into sounds and noises of all imaginable kinds; a use of space and location as a musical instrument; revision of harmony in such a place where it’s not supposed to be found.