DOCU/RIOT: Your voice – your strength 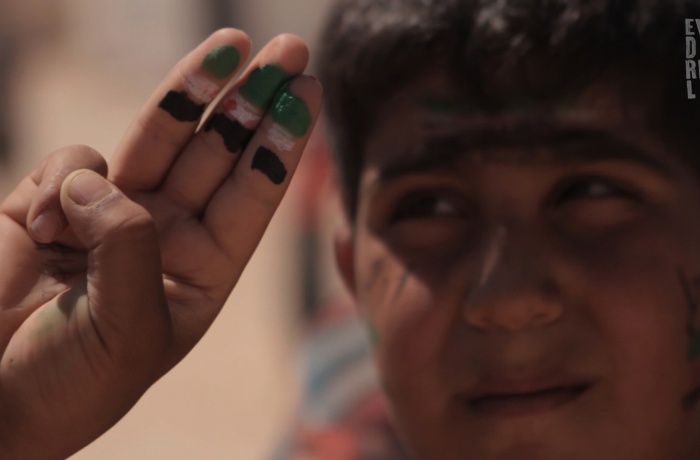 We’re continuing the showings of DOCU/RIOT program at Docudays UA. On March 25 at 5 pm in Blue Hall of Cinema House there will be a screening of Everyday Rebellion and Q&A with the director. On March 27 at 5:15 pm in the same place we’ll show Demostration by Victor Kossakovsky. Moderator of DOCU/RIOT Natalya Gumenyuk talks the concept of the program:

“Even if cucumbers here in Ukraine are smaller, in other countries there is no difference,” I reply to the Egyptian director and artist Bassem Yousri. I’m watching a film about his politically-engaged art (“When war is all around, and you’re painting a rose, something is wrong with you. I live in this society, and what I’m doing is a part of it,” says Bassem later.) Bassem is playing the role of an Egyptian television announcer. For the first half hour, he is either silent, or says meaningless phrases and sounds. At the end, the speaker gets a huge cucumber – ours don’t grow that big – and begins to eat it. The film was shot a year before the overthrow of Mubarak. (“Three years ago I did not believe that the regime in Egypt would ever change,” says Bassem afterwards.) Bassem’s pre-revolutionary works reek of disbelief, despair and even anger: “When I received a scholarship and moved to the United States, I was convinced that I would never return to Cairo. It seemed to me that the country was in a terrible state, it was dominated by hopelessness.”

Hopelessness – all that remains, when all the paths have already been tried.

When you consider that your experience is unique, you feel good as long as there is progress and success. But when difficulties arise, you seek a way out based on experience. We had the ‘revolution on granite’, ‘Ukraine without Kuchma’ and the Orange Revolution. However, the protests were never broken up with bloodshed, the special forces did not shoot at unarmed people, the activists were not abducted, and the machinery of repression never operated so systematically. The experience of the Orange Revolution was not enough.

When Docudays UA was conceiving its program about protests around the world, even before the start of the Euromaidan, it considered the wave of protests which have swept the world in recent years. International analysts have written that during the year 2014, 65 countries (including Ukraine) are at high or very high risk of undergoing social unrest. The causes of this social unrest vary, from the riots of the middle class, as in Brazil; the protests against austerity measures, both in Spain and Greece; to rebellion against dictatorships (especially in the Middle East).

Ukrainian and global intellectuals have tried to somehow define and combine these protests. During the first days of the Euromaidan, the historian Yaroslav Hrytsak said about the revolution: “This is not the Orange Revolution or the Rose Revolution in Georgia, but rather ‘Occupy Wall Street’, the events at Bolotnaya in Moscow, or what happened in Istanbul. A revolution of young, educated people, who have an education but have no future. This is a rebellion of people who want to live like the middle class, and who have only one way out – to treat the old politicians and the old policy with skepticism”.

After the attempt to storm the Maidan on December 11, the assaults on the activists and above all the first bloodshed, not all the comparisons were appropriate. However, the reasons why people are rising up around the world – tyranny, corruption, a disregard for what the public thinks – are linked.

You can believe that there’s no point in comparing yourself with the worst, remembering how many of the world's dictatorships kill people. Sometimes knowing that the titushky were not uniquely ‘made in Ukraine’ – that regimes that work with criminal organizations or corrupt courts have existed and still exist elsewhere – still makes it possible to search for a way out. Especially when this way out can be found elsewhere.

Our selection of films about protests has not been made with the aim of seeking parallels. (Although sometimes they are not redundant.) It’s not an attempt to look for prescriptions or simple answers to complex questions. (But maybe one will suddenly pop out?) Nor is it to learn from the mistakes of others. (But maybe it will help?)

What we can certainly do is to realize that we are not alone. When looking for the light at the end of the tunnel, there is a chance to see whether someone on the other side will light a torch for someone who is also looking for a way out.

“What can I do for you?”, a Venezuelan activist asks me on the day when people are being murdered in Kyiv. He was exhausted from throwing stones at the police during the many protests, so now he is organizing art events. “Let me organize something in solidarity with Ukraine,” he said, tying a ribbon on his wrist that says ‘Your voice – your strength’. “It propably won’t help,” – however, it makes me happier.

“What can I do?” I’ll ask again in a few weeks, when a student in Venezuela is shot during a protest. I’ll complete my text, so that I can take pictures with the words ‘#IamYourVoiceVenezuela from Kyiv’, and send it to Caracas.