How the western press is getting it terribly wrong in Ukraine 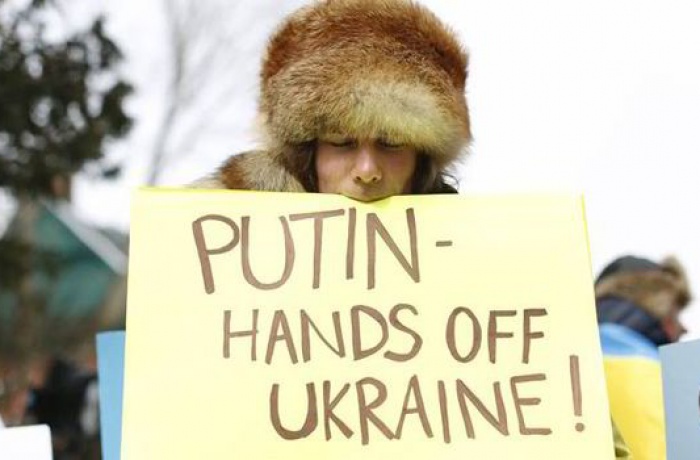 When the pundits talk about Vladimir Putin’s offensive in Ukraine, they usually mean troops and tanks, but his greatest weapons are ,in fact, his propaganda machine and the gullible western media.

So far, he has been winning stunning victories without firing a shot.  Make no mistake, Vladimir Putin cares deeply what the western public thinks and has an army of PR professionals and lobbyists to wage informational warfare, along with a network of sites including “Russia Today” and a variety of “strategy” blogs.

Amazingly, the western press in its desire to adopt what NYU Journalism professor Jay Rosen calls the view from nowhere, has been repeating many of the false assertions that Putin has promoted. Here’s a quick guide to the most egregious errors:

Myth 1: The Interim Ukrainian Government Is Shaky, Illegitimate And Run By Neo Nazis

Ukraine recently ousted its corrupt dictator, so many assume that the interim government is inexperienced and without democratic legitimacy. However, that narrative simply doesn’t fit the facts.

The truth is that Yanukovych’s own party turned against him.  The Parliament today is made up of the same members as it was a before the revolution (besides a handful that are now on the run).  Interim President Turchynov andPrime Minister Yatsenyuk are both former cabinet ministers and capable, experienced politicians and diplomats.

Three former democratically elected Ukrainian Presidents have issued a joint statement denouncing Russian actions and supporting an EU mission to the country.  This represents the entire leadership of Ukraine as an independent country except for Yanukovych, who was impeached by his own parliament.  A new presidential election is scheduled for May.

There has also been completely unfounded accusations that Ukraine’s interim government is “Neo-Nazi” and “Ultranationalist.”  Timothy Snyder has done a wonderful job debunking these claims.  The truth is that much of Ukraine’s present leadership, including Yatsenyuk are Jewish.  Jewish community leaders in Ukraine have also refuted Russian accusations.

Only the most twisted mind could conceive of a Jewish led Nazi conspiracy.  Are there Neo-Nazis in Ukraine?  Sure, just as there are in Chicago and every other major American city.  Are some politically active?  Yes, as is David Dukein our own country.  Do they have any power to shape policy or events?  Categorically no.

Myth 2: Ukraine Is A Divided Country

Another widespread misapprehension is that Ukraine is a divided country.  There are Russian parts and Ukrainian parts that do not get along. Frequently, maps like this one are shown to illustrate the point: 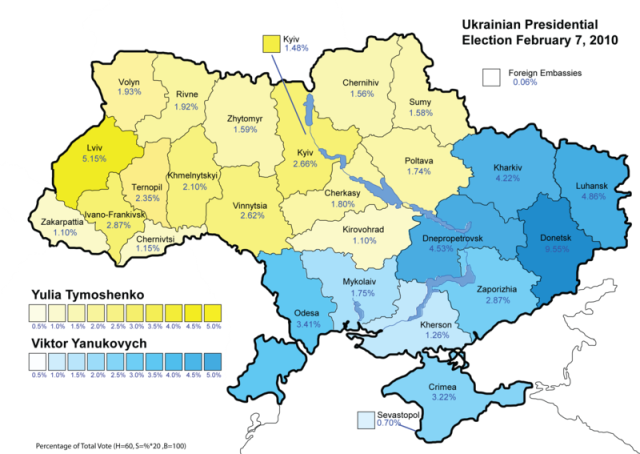 Anybody who’s watched a recent US election should know that such divisions are common in any true democracy.  A vote for Ted Cruz is not in any way a vote for Texas secession.  And yes, there are some Ukrainians that would like to return to Russia just as there are Texas secessionists and Confederate loyalistsin the US.  Every place has its nuts.

Another approach is to look at linguistic differences, which fall upon much the same lines as the political vote.  Here again, the divide is real, but vastly overblown.  Much of the interim leadership, including Turchynov and Yatsenyuk as well as Yulia Tymoshenko and all of the past presidents are native Russian speakers.

So again, while there is an element of truth in the Russian-backed story, there is an overwhelming abundance of falsehood.  Nobody, except the most rabid extremist, wants their own country invaded by a belligerent foreign power.

Myth 3: Ukraine Is No Match For Russia’s Military

Another common narrative is that Ukraine is no match for Russia militarily.  The Russian armed forces are far larger and better equipped.  These claims are true, but misleading.

First of all, Russia can’t use its entire military.  They need significant forces in Chechnya, Georgia and other places.  Further, as I noted in an earlier post, Russia’s military is made up of 70% poorly trained conscripts.  A military expert speaking to The Washington Postdescribed Russian Forces as competent, but not impressive.

And Ukraine’s forces, while far smaller, are universally described as capable.  They would have an advantage defending their own territory and would be receiving assistance, overt and covert, from NATO forces.  You don’t have to have boots in the ground or planes in the air to help tip the scales.

The truth is that military experts believe a war in Ukraine would not be a repeat of Russia’s relatively easy victory in Georgia, but a long drawn out battle.  That is not something Putin can afford.  That doesn’t mean he won’t do it, but it would cost him dearly.

Myth 4: Putin Has The Upper Hand

Many commentators like to describe Putin as a diabolical mastermind, outfoxing Obama at every turn.  That is patently absurd.  The truth is that Putin is losing, which is precisely why he is embarking on the high-risk gambit he is now.

To get an idea of the poor hand Putin is playing, look at what happened when markets opened on Monday morning.  Not only did the stock market fall by about 11%, Russia had to spend $10 billion to prop up the Ruble. Putin has ample reserves of nearly $500 billion, but simple arithmetic reveals at that rate Russia won’t last much more than a month and a half.

And economic sanctions haven’t even started yet.  There are already reports of dollar shortages on the streets of Moscow—which, I imagine, invokes a flurry of bad memories—a comprehensive sanctions regime would likely bring back the empty shelves and breadlines of the 90’s.

Finally, Putin desperately needs the support of Russian elites, who have their money in western banks, vacation homes in places like the South of France and Miami Beach and children in western boarding schools.  All of that can be easily taken away through sanctions.

It has somehow become fashionable to drudge up Mitt Romney’s comment about Russia being America’sgreatest geopolitical foe.  In the minds of the chattering classes, those comments now seem prescient.

How?  Russia has no ability whatsoever to threaten us or our allies—militarily, economically or on any other front.  The current battle is being fought on its borders, not on ours. Throughout history, there has been a never ending stream of crackpot dictators who have caused us one problem or another. Putin is just the latest.

President Obama has said that we should no longer view the world through the lens of a Cold War chessboard and he’s right.  We have already won nearly all of the squares.  The people of Ukraine and Georgia have chosen closer relations with us precisely because they want to leave Soviet history in the past. We should too.

Most of all, we should approach the current crises with cool heads.  In time, it too will pass.  Russia will remain a corrupt kleptocracy, waiting only for the next oil glut to descend once again into chaos.  We in the West, and hopefully in Ukraine as well, will be free to pursue our dreams in a global community of likeminded nations.

Update 1:  Secretary of State John Kerry was in Kiev today and in his remarks echoed some of the points I made above.  You can find the transcript here.  Also, The New Republic’s Julia Ioffe’s account of Vladimir Putin’s press conference today supports the worrying claim of Angela Merkel that the Russian President may not be in full control of his faculties.

Update 2: More myths debunked at the Kyiv Post and at Mediaite.

Update 3:  Ukraine’s Jewish leaders have signed an open letter refuting Putin’s claims of anti-Semitism and say that they do not wish to be “defended.”  Also, Forbes’s own Kenneth Rapoza and Business Insider both have good pieces up showing how Russia’s natural gas leverage is being overblown.  A decade of gas politics has degraded the tactic.