Photo 51: Is Corruption in Russia’s DNA? 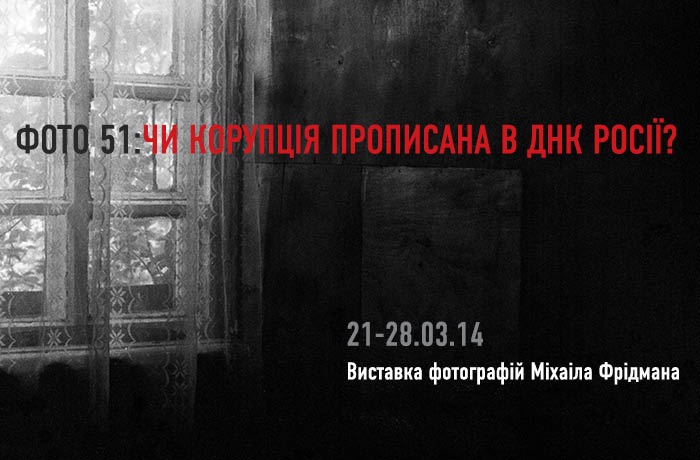 Official opening of the exhibition and press-briefing: March 22, 5 pm.

Like threads of DNA spiraling in ladder formation, Russia’s reliance on corruption for its basic functioning is both commonplace and breathtaking. Starting this project, I knew I did not want the aggressive expressions of it; I could avoid ostentatious nightclubs, would not need to listen at keyholes, nor to sniff out connections with criminals. Really, all I needed was Russia itself. And once I got to St. Petersburg and Moscow, to little towns in Karelia and the Urals, it took no more than a drive or a walk to see it manifested everywhere: the grove of birches banded delicately with crime-scene tape; the crew setting up the Scarlet Sails festival; even a lone car driving down a curving road at night.

Most people don’t acknowledge this, but corruption in Russia has become its own institution, upon which all other institutions run. Without the patron-client transaction, business and education, police and military, medical and judicial operations, don’t happen. With time, it got so I couldn’t pass anything — a building, a traffic intersection, an abandoned farm — without becoming hyper alert to the way it embodied corruption’s creep into every organ of civic society. In a way, my sense of alertness was a mirror for the paranoia and arrogance that weaves corruption so thoroughly into the logistics of people’s daily lives.

While this state of affairs has always ruled, since Putin, government’s grip in all arenas has made it so that corruption is now coded into the entire state and civic apparatus. It’s no wonder everyone wants to work for the government: salaries aren’t the reason — their guaranteed enhancement is. The country is now run by a criminal-corporate syndicate with Putin at the top.

What I’ve come to define as corruption goes beyond any one act and points to the acceptance of the whole system of it. Things that are not normal — bribing, beatings, adultery, cronyism, negligence, chauvinism, lying, and the cynicism of elected officials — are borne as normal.

There’s a joke Russians tell: "The city is great, it’s just that this neighborhood is bad." My aim for this work is start a conversation about why this is funny. How is it that Russians think themselves exempt from the problem of corruption, with everything being government's fault? One way of talking about it is with pictures; I think of Photo 51, the breakthrough X-ray diffraction image shot in 1952 that provided researchers with a way to model the structure of DNA. To me, Photo51 signals photography’s power to draw out what is latent and make it visible. I want to employ this power and begin to identify corruption’s warping effect on Russian society’s DNA.

Misha Friedman was born in Moldova and lives in New York. He qualified as an economist and political scientist. He has spent many years as a coordinator in humanitarian projects around the world, including the ranks of Doctors Without Borders. He lectures at photography schools in New York, Moscow and St. Petersburg. His work has been published in leading international journals, and he has won many photo contests, including Picture of the Year International. His work has been presented by the French Cosmos photo agency, the German-Austrian-Swiss agency Life, and the Russian agency Salt Images. Misha Friedman's website is at www.medvedia.com