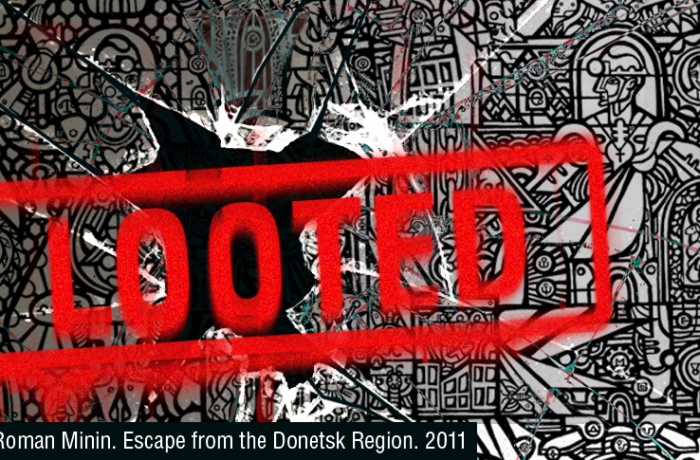 An open letter from IZOLYATSIA. Platform for Cultural Initiatives to the “prime-minister” of the DPR (‘Donetsk People’s Republic’), Mr Alexander Boroday.

Following the illegal actions of your subordinates associated with the seizure of the Izolyatsia territory on the 9th of June 2014, we make the minimum demand that you let the foundation retrieve from the seized Izolyatsia territory property and documents that are intrinsic to the organisation’s operation and history, as well as the employees’ personal belongings.

On the 9th of June 2014 IZOLYATSIA’s rented offices, located on the site of a former insulation factory, were seized by a group of armed forces affiliated with the DPR.

Prior to the incident and under mounting tensions in the region the foundation had halted its activities.

During the invasion on June 9th the DPR’s “Minister for Social Policy”, Roman Lyagin, promised that the artworks and property belonging to the foundation would not be damaged.

However, on the following day, June 10th, the employees from the former Izolyatsia factory still present on the territory noticed that the DPR militia under the influence of alcohol had looted the rented offices of the foundation, vandalising private property, and removing equipment, tools, the contents of the foundation’s safety vault, including the private property of its employees. Meanwhile, the foundation’s representatives were prohibited from recovering artworks, documents and personal belongings.

There are also permanent installations on the Izolyatsia territory, some of which cannot be dismantled or removed. Unless the territory is immediately vacated by your subordinates, we insist on receiving reimbursement of the costs associated with these site-specific works.

Meanwhile, it is essential that the foundation representatives gain access to artworks that may be removed from the territory, and which include such items as paintings, sculptures and various artefacts made by contemporary Ukrainian and foreign artists.

Within the last four years numerous artists, curators and art managers have been working together to create, install and maintain these works. It is these unique works which have given Izolyatsia its identity in Ukraine and internationally. This initiative has transformed the territory of the former factory into a popular social venue for local residents and tourists.

The cultural community at large shares serious concerns about the implications of the DPR’s actions and calls on the DPR to comply with the demands outlined in this address.

The art works can still be saved. We ask you to instruct your subordinates to allow our representatives safe passage to remove the artworks, documents, equipment and personal possessions.

Find out more on the topic: Terrorists captured Donetsk's IZOLYATSIA