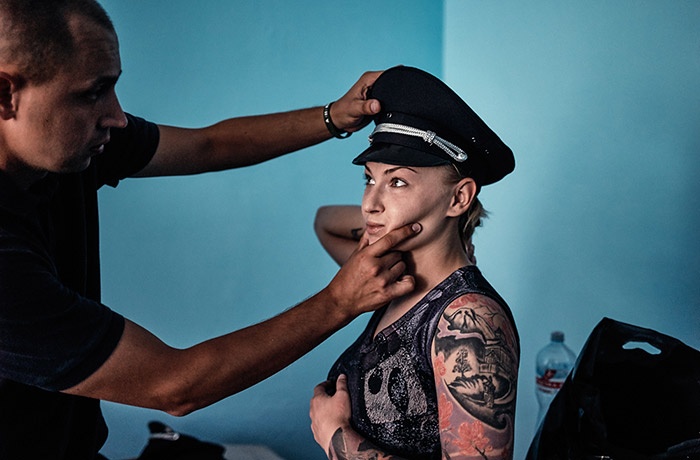 The exhibition of photographs by Misha Friedman entitled Ukrainian Dream is another facet of the hypnotic whirlpool of this year’s Docudays UA, which offers us the chance to look at the symbol of Ukrainian reforms, our new police, from a refreshing perspective. What is prevailing in the reform of the Ukrainian police, the dream or the result? And what is the role of women in this ‘gleaming pocket calendar’, after all? Are they just another surface for the projections of the patriarchal society, or are they active agents of change in a society moving towards democracy and equal rights? Misha Friedman tells how all these questions are embodied in his photo project "Ukrainian Dream".

Dreamers are naive and impractical people living in a fantasy world.

Dreamers are visionaries who do bold and daring things.

Ukraine is in the process of reforming one of its most oppressive institutions: its police force. The Euromaidan required the complete transformation of the law enforcement system. The police were considered to be bullies, crooks, and murderers, to be avoided by civilians at all costs.

Women are at the helm of this ambitious and perhaps impossible task. Once there were almost no women in police uniform, but now about a quarter of the officers are women. Many jobs are still considered too demanding for women, so seeing women in uniform on a regular basis could be a first step towards changing social attitudes – towards achieving gender equality.

It is also intended to address the epidemic of violence against women. Some 90 percent of reported cases of violence in Ukraine are against women; it’s estimated that only a quarter of the victims of domestic violence even dare to report the crime. By hiring more female police officers, reformers aim to encourage more women to seek help.

While taking photographs in Kyiv, I witnessed female patrol officers defuse a potentially dangerous situation just by arriving at the scene and calming everyone down, including other police officers. The hope is that they can build trust within a community scarred by decades under the intimidating forces of the Soviet and post-Soviet era.

The stakes are high: the rule of law and the people’s trust in the new system – their sense that last year’s protests really meant something – hang in the balance.

There would be no progress without dreamers. The dreamers from the Euromaidan were after a Dream, a Ukrainian Dream. Now it is up to the policewomen to aim for their dream.

The exhibition will be open from March 26 to April 1, 2016, on the third floor of the Cinema House. Its opening ceremony will take place on March 26 at 4 p.m. After the ceremony, we invite you to participate in a discussion Beyond ‘Berehynia’*: The Role of Women in the New Ukrainian Police, with the photographer, and police lieutenant Tetiana Koretska. The discussion will be held in the White Hall (Cinema House, entresol) at 5 p.m.

Misha Friedman was born in Moldova in 1977, and graduated with degrees from Binghampton University and the London School of Economics, where he studied economics and international relations. He worked in finance and later in humanitarian medical aid while teaching himself photography. Misha's analytical approach to storytelling involves trying to look beyond the facts, searching for causes, and asking complex and difficult questions. Sometimes he succeeds.