Igor Blaževič: "One World has been able to listen to what films are saying" 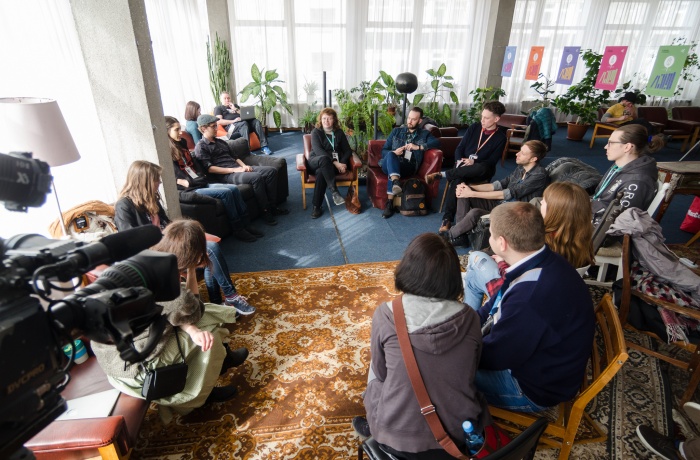 An interview with Igor Blaževič, founder of the largest human rights documentary film festival, One World, where we talk about solidarity and intellect in times of war, the ability of filmmakers to uncover the deep problems in society, and why consuming less matters.

You have probably told this story numerous times before, but can you tell us one more time, for our readers, how you started organising human rights film festivals?

I’m originally from Sarajevo. When the war in Bosnia started I was already in the Czech Republic, but my family and lot of my friends were living in Sarajevo. Before the war I was a typical intellectual – I was doing nothing but reading books and dreaming of writing one myself eventually. But after the war started I realised that I would have no right to say anything if I didn’t find a response to the war. It was such a profound catastrophe of everything that I believed in: when you are suddenly faced not just with the death of the people and destruction of your city and country, but you are faced with profound evil. That’s when the question appears about what you can do as an individual and as a part of society. I started to get involved in humanitarian work, and that’s where I realised that wars are not just places where people are victims and where you experience the worst of what a human being can do to another human being. You also experience the best of what is in a human being. Such extreme situations are also very much about solidarity, about dignity, about art and culture, about intellect. And that’s when I started to use art, culture and film festivals as my own personal response to the war or lack of freedom.

Following on from that question, what is the position of the artist and intellectual in the world we live in?

I think that good art – and we can expand it to culture as a whole – is about creating, keeping and recreating values. That also sometimes means questioning values, especially fake ones. This also calls for the recreation of what I call the backbone of human spirituality and morality. And this is the most profound role of any art, including film art. Film, of course is entertainment, popular culture, and it can perform many other services, but more deeply than anything else, it is about the values. Currently we are once again in a situation where we are going through tremendous tectonic changes, where the whole world is shaking. We are faced again with the profound question of what kind of political system works, what kind of relations we want, between us and between societies and within societies. And I think this is the task and challenge of the art of film today – to tackle these questions in order to bring understanding. Not clear-cut answers, but a careful deliberation, a careful understanding which will bring an opportunity for people to have a proper dialogue about what we consider as the backbone of our societies and of us as individuals.

You are the founder of the One World Festival, the biggest human rights documentary film festival. What are the biggest milestones in the festival’s history for you?

The first milestone was when the festival became big in terms of the audience and in the terms of outreach to Czech society. It happened in the first five years, when we moved from a couple of thousand of people in the audience to tens of thousands, and finally we reached a hundred thousand people who were in some way attending the One World events. For me One World has been like an annual ritual in which basically we, the community of people, are coming together like the tribe comes around the fire to drum out what our core values are. By drumming the whole night around our fire – the light of the screen – we are reconfirming what we believe in. This was the first milestone.

The other important thing was when we went into the schools. Now every second school in the Czech Republic uses films provided by our festival in their education. We have shown that the films, good discussion after the films, and good methodology can bridge an important gap in today’s education. We are helping teachers, schools and children to think about the world today and its challenges, in a way that is very attractive for young kids but very demanding for the teachers.

Since building audiences is such an important marker of success for One World for you, can you share some insights with us into the strategies for building up the audience that your festival used?

First we tried to appeal to mainstream young people, that is, people who are interested in film and the world in general, but maybe not necessarily in human rights. Back then we used a marketing approach to persuade young people to come to the cinema. Once they were already in the cinema, we did not need any more marketing, because the films were strong enough to persuade them to come again. When One World became really trendy we started to expand into schools, into communities, we started to organise cooperation with civil society groups to bring special audiences to our screenings (such as elderly people). And then we said to people in the Czech Republic, ‘you can be an organiser of One World in your coffee shop, your school, your church’. We cleared the screening rights for a certain number of films so that people could organise small community screenings. This systematic approach to involve active people into becoming those who rescreened the films helped One World to go deep into Czech society.

Does One World have a strategy of reacting to or reflecting on urgent human rights problems?

You can only show the films that have been made. This is a limit of a film festival: whatever ideas you can have about what is important or relevant, if there are no films to show, you cannot do anything about it. So the most important thing is to have a lot of films submitted, to see them and to be very careful not to project what you think is important, but to see what those thousands of films that have been submitted are telling you about what is important to the people. We rarely have preconceived ideas about what the main topic of our festival will be. We let the films and filmmakers, who are the people who dig deep into their societies and in the world today, tell us what is important. In the last couple of years, One World was always a year or a year and a half ahead of the popular debates. For instance, a few years ago main topic of our festival was employment, and suddenly you have lots of movements and discussions about working people, being poor and people losing their jobs. Filmmakers are obviously pioneers in identifying deep problems in society. One World has been able to listen to what films are saying and to highlight these topics, sometimes even ahead of more general debates.

For the last few years you have been working actively in Myanmar (Burma), a post-conflict society that remains largely unknown to Ukrainian audiences. What was your experience there?

I will talk in more details about organising a human rights film festival there during my DOCU/CLASS talk, but here I want to say briefly that it has been an extraordinary experience for me. This is a country that was destroyed, because it has been in a very brutal dictatorship and a civil war for over sixty years. I have been working there with people who were released after spending 15 years in a tropical jail, starving, just for doing one five-minute long demonstration in the streets. Now they are trying to reengage with their society. It was an extraordinary experience to be at the right place at the right time, to share experiences that I have gained from changes in our societies with them. I also witnessed once again there how films and film festivals can help to heal wounds in a society with deeply traumatised people. People are not able to talk about their trauma because no-one ever listened to them, or they were even punished for talking about it. And a well-organised festival with good films can help people to talk publically about these traumas, it can help people to listen to each other and start to heal the soul of the society.

DOCU/CLASS with Igor Blaževič, Launching Festivals with Mission, is scheduled for 28 March at 2 a.m.