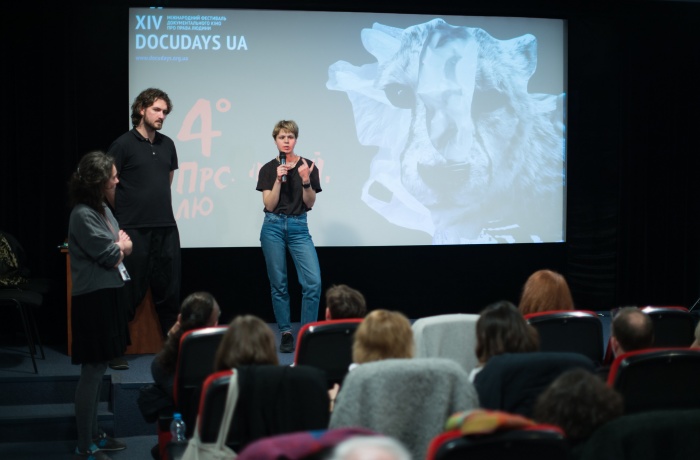 The open pitching of 15 documentary projects from Ukraine, the United Kingdom, and Georgia, has become one of the most important parts of the new industrial section DOCU/PRO.

30th of March was the final date of three long term workshops – DocWorks: UA/UK, Warscape and The Young About Ukraine, that have been held during the year by Docudays UA and its partners from the British Council in Ukraine, Sheffield Doc/Fest, International Red Cross Committee Delegation in Ukraine, and the Embassy of France in Ukraine. Three very different programs had one common goal, which is shared by most of Docudays UA accompanying projects: development and support of Ukrainian non-feature filmmaking.

Our organisation also had the opportunity this week to discuss with the public of the festival the issue of mental health consequences of war on civilians, which is a problem of tremendous importance but yet not known enough. So, tonight I am very glad to give our first Warscape award to a documentary project that shows how war disrupts family life and profoundly affects people for years, - noted Alain Aeschliman, the head of International Red Cross Committee Delegation in Ukraine.

According to the director Valeriya Treshchova, “This film is a "message about hopelessness”. Hopelessness of war will be shown through the story of my father, whom I knew totally different before this war. Now I learn to show my feelings and to forgive, because ‘tomorrow’ can never occur. The war reminds us about it every second. My dad is trying to regain his life, being trapped into double isolation between his lost memory and new uneasy reality of his hometown”.

UNDERWATER is a film unrolling around Antigona, a promising painter who one day burned all of her work and started to produce dark porn horror films. Antigona says that this is her immersion into her own fears, kinks, and childhood traumas. The traumas, about which she has been keeping silence for years. The traumas which shattered her life and tore her family apart. The traumas which have become her only obsession yet in a way also an inspiration. UNDERWATER is following Antigona’s artistic and personal transformations, with every new project of hers exposing more despair, aggression and madness than the previous one. Every next project by Antigona is her new step back, which brings her closer and closer to her traumatic experience.

Besides this, Brigid O’Shea, one of the experts of DocWorks: UA/UK jury board, counselor and expert in documentary filmmaking, has granted a special prize from DOK Leipzig industrial platform to “Andriy Suleiman” project by director Alina Gorlova and producer Maksym Nakonechnyi. The prize includes two accreditations to DOK Leipzig industrial events and free consultations from Brigid O’Shea for the winners.

“N(OSTALGIA)” project (director Vicky Thornton, producer Marion Gut), which also rook part in DocWorks: UA/UK program, received the prize from the best pitching from “KWA Sound Production” company (50.000 UAH). The creators describe their project as an existential journey from the past to the present. In search for utopia and memories about home, the actor-director is traveling to a former Soviet town of miners on the edge of the world.