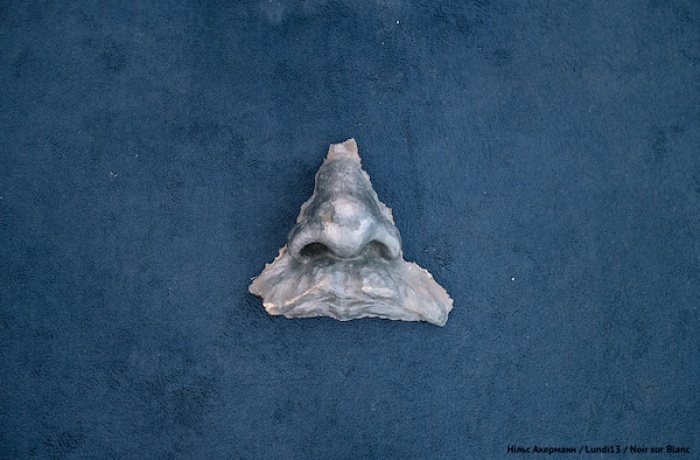 Ukraine’s Leninfall is perhaps the most sensational of symbolic purges in the contemporary world, but not the only one. Swiss photojournalist Niels Ackermann and French journalist Sébastien Gobert travelled extensively across Ukraine in the wake of the Revolution of Dignity in search of the fragments of the crumbling Soviet past. Myroslava Hartmond, a contributor to their joint book of the same name, which was published in 2017, and managing director of the Triptych: Global Arts Workshop gallery in Kyiv, reflects on the importance of taking stock of fallen Lenins in the context of this year’s theme of equality. The project is supported by the Swiss Embassy in Ukraine and the Journées francophonie 2018 programme.

Niels Ackermann and Sébastien Gobert’s ‘Looking for Lenin’ is a snapshot of a country in crisis that captures Ukraine at war with its past, its Russian neighbour, and its identity. The series, which reveals the different fates of statues across the breadth of the country, had great success in the global media, became the basis of a book of the same name published in the UK and Switzerland, and has been exhibited in France, Switzerland, the United Kingdom, Turkey, Lebanon. All over the world, Ukrainian Lenin was cited as an example. Because this series resonated with the reassessment of the symbolic vocabulary of cities worldwide – the Rhodes Must Fall campaign in South Africa and the UK, the removal of Confederate monuments in the US, as well as heightened sensitivity to Belgian colonial statues.

The Lenin statue, a unifying feature of the Eastern bloc’s public spaces, has proven to be an enduring trope of the imagined post-Soviet landscape, firmly embedded in the collective imagination. His image was serialized in statues and paintings, banners and badges, posters and postcards, the printed page and the film reel, and dispersed to the farthest outposts of the former Soviet empire and beyond.

When in 1991 the U.S.S.R. – a world power that spanned 22.4 million km2, with a population of almost 300 million people across 15 republics subject to a one-party government – ceased to exist, its complex symbolic system imploded with it, but the relics onto which the symbols had been grafted remained. Newly independent Ukraine inherited over 5500 Lenin statues alone, installed at much greater density that the 7000 remaining on Russian territory. Regional administrations in the Western parts of Ukraine ordered the removal of Lenin statues in the late 1980s. Many Lenin monuments were removed from the streets of the capital in the early 1990s, until the only one left standing was Sergey Merkurov’s famous statue in Taras Shevchenko Boulevard. However, in some parts of Ukraine (even in such a progressive city like Kharkiv), the locals regarded Lenin with an affectionate irony, even nostalgia. Here he was the locus for collective celebration, the intuitive centre point of the city, the cornerstone of the Derzhprom architectural ensemble.

Ukraine’s Lenin statues became re-politicized during the Euromaidan protests of 2013, when it once again came to symbolize the hand of the Kremlin and its cronies. On December 8th 2013, an angry mob toppled Sergey Merkurov’s rose quartzite statue, and in the weeks and months that followed activists tore down hundreds of Lenins all across the country. By the summer of 2015, the new Ukrainian government passed a series of ‘decommunization laws’ that sanctioned the iconoclastic actions of the protesters and decreed the outlawing of Communist symbols and ideology, which called for the removal of other monuments and the renaming of place names.

Today, not a single Lenin statue remains standing on its pedestal in Ukraine. Order No. 200, issued on 4th April 2016 by the Ministry of Culture, stripped 794 cultural objects in 13 Ukrainian regions of their ‘heritage’ status, including ‘monuments to V. Lenin, M. Frunze, F. Dzerzhynskiy, S. Kirov and other perpetrators of the totalitarian propaganda of the Soviet regime.’ In their handling there is no uniformity, as we learn from Niels Ackermann’s iconographic archaeology: some have been stored away by the authorities, others removed from their original spot and laid out, some are broken, tampered with beyond recognition, while others – such as contemporary artist Alexandr Milov’s Darth Vader – became a global hit. A few have been repossessed by locals who hope to sell them to foreign collectors, others remain unclaimed.

No longer ‘colonized’ by Lenin, the vacant pedestal becomes an arena for contending visions of national representation. In some towns, Communist memorials are transformed into monuments to the Heroes of the Heavenly Hundred or the war dead; in other towns, religious statuary takes the place of the political; other still are empty. It is these empty plinths that litter the towns and villages of Ukraine today, much like the stumps of felled trees, that ask the question: what next? The ‘decommunized’ landscape is purged of Lenin and yet devoid of signs of development. Scrawled with slogans, damaged beyond repair, surrounded by rubble: the empty plinths point to the drabness of their surroundings.

It’s undeniable that for many Ukrainians, Lenin was a symbol of the atrocities perpetuated by the Soviet regime against their fellow countrymen. Millions of Ukrainians lost their lives due to the policies of the Communist Party, through the man-made famine of 1932-33 (known as the Holodomor), mass mobilization, forced deportation (like that of the Crimean Tatars in 1944), or imprisonment and execution of dissidents and nationalistically inclined intellectuals and artists even in the later years of the Perestroika. But for some, the era of Lenin was a time of social security and employment stability, of high-level education and medical care available to all. It was an era of scientific and sporting achievement by a nation that had colossal international influence, both feared and revered – and today, Russia has no qualms about assuming credit for the totality of the Soviet republics’ achievements, especially in its conversation with the world. To many people around the world, Lenin was the emblem of social justice and equality, especially in the developing world, where Communism seemed to provide an alternative to the excesses of colonial policies and capitalist excesses.

Ukraine’s decommunization process has been characterized by a quarter-century disconnect with the fall of the regime that bore those symbols, by a lack of public consensus regarding its methods (including the criteria for the removal of Communist symbols), as well as an absence of vision regarding the future appearance of Ukrainian public places, liberated of the vestiges of totalitarianism. Indeed, the methods of decommunization have at times been less than democratic, and have incited parallels with the removal of Tsarist monuments and churches that were destroyed en masse when the Bolsheviks came to power a century ago. Ukraine, a contemporary European state that has many layers of history beneath its surface, has the potential to become a country that celebrates those pages in its public places. ‘Looking for Lenin’, then, is as much about Ukraine’s Soviet past and revolutionary present as it is about its future, where different historical and political narratives can coexist in a united society without the fear of erasure. With no more Lenins standing in our streets, you are invited to look at the decommissioned ones in the safety of the picture frame and to reflect on what should replace them.

On Tuesday 27th March 2018 at 18:30, we invite you to join our panel discussion on ‘Leninfall and the Transformation of Urbanist Consciousness’, where four creative thinkers swap notes on the future of Ukraine’s decommunized cities and the role that the public space plays in building civil consciousness and transforming identity.

Participants: Sébastien Gobert, (French independent journalist, traveller, and writer, co-author of ‘Looking for Lenin’), Oleksandr Mykhed (writer and art-curator, who has authored 6 books, which have been translated into 10 different languages), Svitlana Shymko (independent film director who holds the DocNomads international masters degree in documentary film directing. Her documentary work she focuses on political, social, and feminist issues, and includes ‘The Fall of Lenin’, presented at last year’s Docudays UA). Moderated by Myroslava Hartmond, curator, writer, and researcher, and participant of the ‘Looking for Lenin’ project.

The Photography Exhibition ‘Looking for Lenin’ by Niels Ackermann and Sébastien Gobert can be seen between March 17 and April 1 in the Triptych: Global Arts Workshop gallery (34 Andryivskyy Uzviz). Free entry.

Header photo: This nose belonged to the Kharkiv statue of Lenin, which at 8.5 meters, was once the largest in Ukraine. When this picture was taken, it was on display at the Pinchuk Art Centre in Kyiv as part of Yevgenia Belorusets’s installation Let’s Put Lenin’s Head Back Together! (2015). Kyiv. 5 February 2016 Copyright Niels Ackermann / Lundi13 / Noir sur Blanc