#SaveOlegSentsov: as a Sign of Support of "Crimean Hostages" 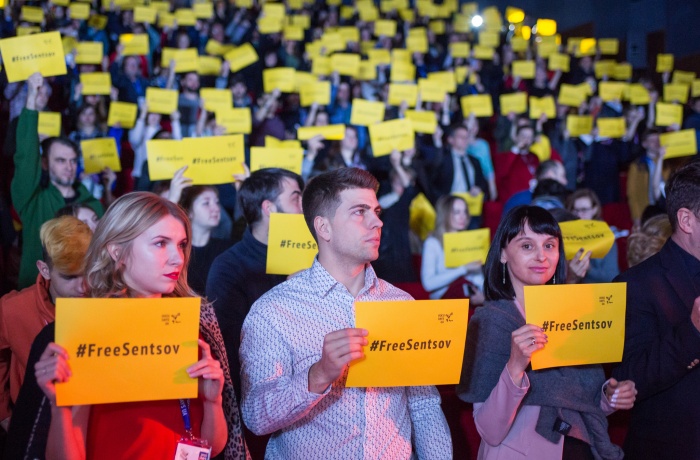 As a sign of support, we are publishing a statement by the independent initiative Committee of Solidarity with “Crimean Hostages” regarding Oleg Sentsov and Volodymyr Bulakh’s hunger strike.

On May 14, 2018, Oleg Sentsov — the Ukrainian director who, based on an absurd accusation of creating a “terrorist society” and “preparing terrorist attacks,” was sentenced in Russia to 20 years of imprisonment in a maximum security prison colony — announced a hunger strike. His condition for ending the hunger strike is that all Ukrainian political prisoners are freed by the government of Russian Federation. Sentsov is very decisive and he has no intention to back down until his demand is met. The illegal “arrests” of the Automaidan participant, director and writer Oleg Sentsov; and the anarchist activist Oleg Kolchenko, who also protested the occupation of Crimea, in May 2014, became the first link in the chain of repression that has since been forged by the Russian law enforcement agencies: by now, more than 64 Ukrainian citizens are kept in prisons and jails in Russia and Crimea purely because of political motives.

According to the information which was published earlier, since the time of his transportation to the Maximum Security Prison #8, a.k.a. “The White Bear,” in the town of Labintangi (Yamalo-Nenets Autonomous Okrug, Zapoliarya, Russia), Sentsov’s health has been steadily deteriorating. In particular, his chronic heart disease and rheumatism have become more severe. A hunger strike under these conditions puts Oleg’s life at even higher risk. His life is in danger.

We must also remind you that since March 19, 2018, another Ukrainian prisoner of Kremlin, Volodymyr Balukh, is also on hunger strike, which he started in protest against the absurd sentence in the case fabricated against him. According to him, his hunger strike is aimed to express his “personal contempt of the occupation regime.”

We ask everyone who values freedom and justice, who cares about Oleg Sentsov, Oleksandr Kolchenko, Volodymyr Balukh and other Ukrainian political prisoners’ fates, to spread this information as widely as possible.

Before 2018 FIFA World Cup, which will take place in Russia from 14th June to 15th July Ukrainian artists, writers, directors and culture activists appealed to the football world to support Oleg Sentsov and other Ukrainian political prisoners in Russia.

The appeal to the representatives of countries who are expected to travel to the World Cup football games in Russia has been created recently. If you would like to sign the letter, please fill out this form.