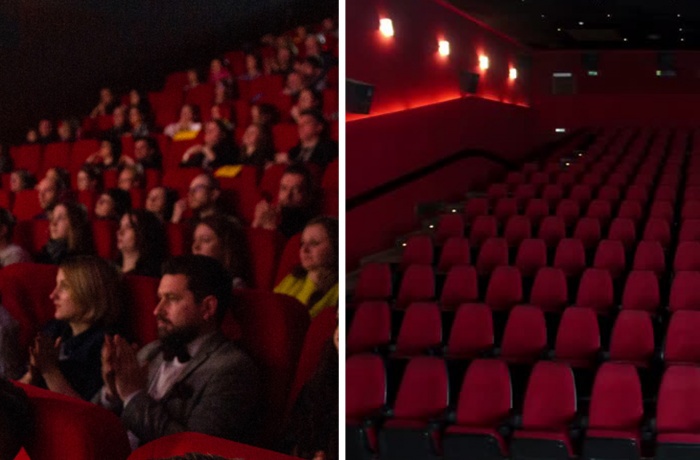 On December 18 at 7 p.m., we invite you to join the online event on docuspace.org.

Amid the lockdown, Docudays UA held the first online festival in Ukraine. As the quarantine was relaxed, Molodist held a hybrid version. Later, Wiz-Art, LINOLEUM and the Odesa International Film Festival experimented under the conditions of the audience’s online fatigue and fierce competition for their attention. Each of them in its own, different situation and with its unique experience, surviving and becoming stronger, Ukrainian film festivals have something to say about 2020. At the online meeting, we will share the numbers and results, think about what worked and what didn’t. And we will speak about what the festival audiences can expect next year.

Viktoria Leshchenko has 11 years of experience in film festival management. She got a degree in cultural studies at the National University of Kyiv Mohyla Academy. In 2007–2011, she worked for the Molodist IFF in various positions. In 2010, she joined the team of the Docudays UA International Human Rights Documentary Film Festival as a programme coordinator. Since February 2019, she has worked as the festival’s programme director.

Anastasia Verlynska is the director of the LINOLEUM Contemporary Animation and Media Art Festival.

In addition to working on the festival, she works to promote independent animation in Ukraine, organizes screenings of Ukrainian animation abroad and education projects for national authors. She has worked as a project manager at FILM.UA Group, participated in organizing the De Kino festival (2016–2017) and the Fashion Film Festival Kyiv (2018–2019), as well as the Shadows of Forgotten Ancestors exhibition (2016).

Hlib Rodchenkov is the PR director of Molodist KIFF, a graduate of the Kyiv Mohyla Academy, the University of Glasgow and the Erasmus University Rotterdam in the field of global markets and creative industries; he was a scholarship fellow at the Harvard Ukrainian Research Institute and used to work as the international relations director at Mercedes-Benz Kyiv Fashion Days and as a project director at the Paris More Dash agency.

Olha Raiter is the programme director and co-founder of the Wiz-Art Lviv International Short Film Festival, one of the best-known and most influential film events in Ukraine. She got a degree in Slavic Studies and Cultural Studies from the Ivan Franko National University in Lviv; she is also a graduate of the Lviv Business School. Olha has worked as a film commission director, a tour guide, a copywriter, and even as a waitress. She is now the curator and film producer who inspired the Big Short online cinema, a place for short films from all over the world in Ukraine. She is a member of the Ukrainian Film Academy, a graduate of the SOFA programme, and a member of the Aspen Ukraine community.