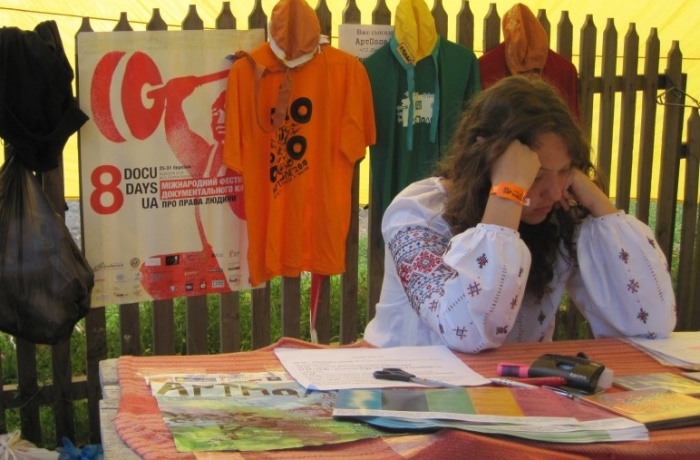 Two days of the best and the latest documentary films in the updated ArtPole’s cinema club. We glad to invite everyone at the special Docudays UA program which will be held at the most well-known Ukrainian open-air ethno-festival, July 12–16, the Dniester Canyon, Unizh, Ivano-Frankivsk region. For the ArtPole’s guests we made an interesting selection that definitely will change your mind about modern documentary. Among the films there are many this year winners, optimistic stories and even documentary animation. Screenings will be held on 13th and 14th of July and will start at 15.00.

At the IXth ArtPole you will as always find music discoveries – organic trance projectAirtist from Hungary and Desi from Czech Republic, two completely different bands from Poland – ironic and loud Mitch & Mitch and emotional virtuosos VOLOSI. Jaakkoo Laitinen& Vaara Raha from Finland will perform Balkan music mixture based on the Lapland climate.

Favorite participants of the previous years Perkalaba and Burdon, Port Mone trio as well as the international music groupTransglobal Underground are going to greet the festival with the new programs. For the first time at ArtPole will be Ludy Dobri,ГИЧ-orchestra, Zapaska & BeBoBul, Dychka and Perkalabski prydatky.

The detailed information about the program, tickets, conditions and other interesting and necessary things is atwww.artpolefest.org.

Mr. Sedlacek was writing one-sentence entries in his chronicle from 1981 to 2005. The chronicle includes everyday stories of his and his family's life (“Today our Gypsy neighbour Gina broke my hand. I was taken to hospital in Mlada Boleslav”), the life of the village and its surroundings (“A man called Bartos, 32 years old, killed his wife, 30, today in Prisovice and threw her body into the pond”) as well as international events (“L.I. Brezhnev died today”). The real chronicle has more than two thousand daily notes. The authors picked two hundred and used about eighty of them for the screenplay. These eighty notes provide a concentrated overview of Mr. Sedlacek's life and of our society.

In a small apartment in Buenos Aires, an old woman eagerly awaits the birth of her grandchild and all the joys of becoming a grandmother. However, horrific circumstances mean she is forced to wait over 30 years. Abuelas explores the traumatic ramifications of General Videla's military dictatorship in Argentina from 1976-83, whereby an estimated 30,000 men, women and children, 'disappeared'. Using real-life testimonials from members of the 'Grandmothers of May Square', this animated-documentary raises issues of memory and loss. The film is testament to the extraordinary tenacity of these women, who continue fighting for the truth about their missing relatives.

New Heroes are three documentary portraits of ordinary Ukrainians. Each of them has a story apart, but all of them struggle against injustice in today’s Ukraine. An average person often has difficulty accessing the information concerning the available legal opportunities that would help this person amend his or her conditions: to start a business, to unite a community for the defense of its communal property, as well as their rights and interests. These are three stories that prove that it is possible to fight injustice if one makes an effort, if one is not afraid and doesn’t get broken under the pressure of circumstances. It’s about the ordinary people from remote places in the East and South of Ukraine who stopped the system from driving them into a deadlock. The films were created with the support of International Renaissance Fund in the framework of the initiative “Legal Empowerment of the Poor”.

In Cape Town, South Africa, one of the world's most violent and unequal societies, a young white film student sets out with his cameraman, leaving the comfort of his protected neighbourhood. He wants to make a Gangster Film, with real gangsters. After a lengthy search for a suitably 'cinematic' character, he finds the perfect gang and settles into their everyday rhythm. The reality soon catches up and the claustrophobic gangster life doesn’t exactly fit to the expectations. 20 year after the first democratic election, South Africa remains a deeply divided society, one in which dialogue and understanding seem impossible, out of reach. It is a film between fiction and reality, where real truths are revealed and fiction stops being fiction, and when it stops mattering.

Victoria, Mariana and Vasco are three young Mozambicans with physical disabilities, living in the townships of Maputo, Mozambique’s capital city. Victoria transmits the self-esteem she received from her education to other physically disabled women by organizing a fashion show; Mariana uses her social energy to create helpful friendships and overcome urban architectonical barriers and Vasco does business, repairing shoes in the informal sector. The film explores how they look at themselves and others and raises universal questions about how to find one’s place in society.

The projects of participants of the special contest supported by the School of Journalism at the National University Kyiv-Mohyla Academy. The task was to create an animated spot that would best convey the festival’s spirit, as well as offer the most interesting interpretation of the festival’s motto – WIN EVERY DAY!

Film La Machina is a journey, ordinary and at the same time poetic journey of the old master of puppets and his young apprentice. This is a first journey of the boy. He is inexperienced and excited, he goes on an initiating journey. The master, on the other hand, is well aware of the fact that it may be his last journey. It’s a sunny southern summer and both of them set off for a long tour in an old truck. They take lighting, a little stage and the sleeping puppets. They go from town to town to perform for the people from the country taking with them their own world and their stories.

Multimedia documentary project consisting of a series of short stories linked by animated memory episodes and directed by 15 young filmmakers from the 15 republics previously annexed into USSR. Each of the directors belongs to a unique generation born in the Soviet Union but grown up in 15 young countries. Each director has freedom to choose character, story, what also reflects important young generation issues of their country today.

Rudolf is a 13 year-old boy obsessed with filmmaking. As a matter of fact, it’s the only thing he’s really fond of. His main interest is horror films, and he uses a special technique to make them – drawing each frame on long strips of paper. He shows the films on a slide projector with a special live soundtrack. Rudolf’s story illustrates the conflict between the imaginary world of a boy and the society surrounding him, where everybody expects him to live according to certain rules and dogmas. How does he cope with it? The biggest surprise comes when the local priest asks Rudolf to make a film to be played during a service.