The Term: documentary news as a principle 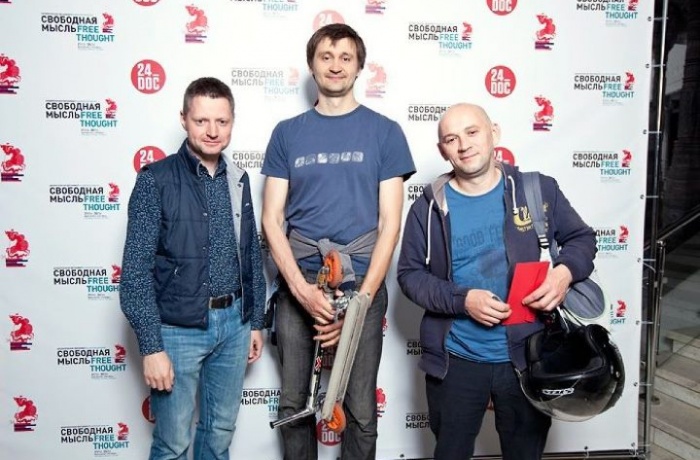 The well-known Russian filmmakers Pavel Kostomarov and Alexander Rastorguyev, who came to public attention thanks to their widely acclaimed experimental films I Love You and I Don’t Love You, among others, started working with journalist Aleksei Pivovarov at the beginning of last year in order to create a film about the leaders of the Russian opposition and the protests that shook the country after the presidential election. The upcoming full-length film The Term will be released at the end of this year; currently the project is available online in the form of a documentary series, hundreds of episodes of which have already aired.

After Kostomarov’s apartment was searched on December 7, 2012, because he was a witness in the case about mass protests on Bolotnaya Square in Moscow on May 6, 2012, the internet project The Term was put on hold, as the authors put it, because one of the principles of documentary films was being violated – the author cannot be a participant in the events he is filming. Shortly thereafter, though, the series resumed under a different name, Lenta.doc.

The makers of The Term talked to us about the past and future of their project, and what Docudays UA’s visitors should look forward to.

Pavel Kostomarov: We are bringing a special selection to your festival: the viewers will be able to choose episodes themselves by numbers or topics. We are also planning to create something like a web-documentary version of the project, where the guests and participants will assemble their own film from the events that took place in Russia during the last two years. Lenta.doc is just a rebranding, nothing is changing, we are just broadening the range of topics.

Your internet-project The Term was special due to its immediate, present-day topicality, but what topic will the film version focus on? Is it possible that it will include previously unpublished material?

P.K.: Indeed, we have a number of unpublished videos, and no searches can… (well, no, we won’t talk about that). All of them will appear in the web-documentary version, and in the classical full-length film which we are also planning to assemble.

How many people in total are creating The Term? How many hours of material have you got?

P.K.: About 15 people permanently, and almost 100 others from time to time: volunteers, random passers-by, informers etc.

Alexander Rastorguyev: I think we have over 1000 hours’ worth of material.

When will you be able to put a full stop at the end of your project?

Aleksei Pivovarov: This is the toughest question. Unfortunately, we feel that we will have to put this full stop rather mechanically, just to give us the opportunity to assemble the film, because obviously, in the process itself, we can’t foresee any full stops in the immediate future. (Laughs) Only ellipsis.

P.K.: Even if we do put a full stop, there will be another dash after it straightaway.

At the very beginning, The Term focused on opposition leaders. Who are the main characters of the transformed project Lenta.doc?

A.P.: The project was born out of the idea to make a classical documentary about the opposition, then it naturally transformed into a format which we decided to call ‘documentary news’. Now, it is called Lenta.doc. Regarding the main characters (we hope their number will keep growing as we broaden our format), the old ones are still there, but new ones will also be added. Soon, everyone in the world will be able to become characters of our documentary news.

A.R.: The main characters of Lenta.doc became news. I think we are the only ones who are currently making ‘documentary news’.

How is ‘documentary news’ different from, let’s say, the regular TV news?

A.R.: The absence of a presenter, the voiceover text, a journalist in the frame, who blocks the events with his back.

A.P.: I would say with his brain, which wants to make all the conclusions and impose certain decisions.

In The Term only you three are giving interviews. Are there any other internal rules?

A.R.: We don’t write the last names of defendants in high profile cases in text messages. We don’t name on the phone the places we go to drink beer.

P.K.: We wash our hands before meals.

How would you evaluate social-political documentaries in Russia, for example those that have concentrated on protest movements? For instance, what do you think about the project Winter, Go Away!?

A.P.: Winter, Go Away! is a top-quality project. It was its quality and success that inspired us to turn away from the classical documentary towards other formats. It is worth mentioning that many of those who worked on Winter, Go Away! are currently working on our team, which we are incredibly happy about. But besides this film, I cannot think of anything else.

Do you feel that socially active people have become apathetic regarding political life in the country after the failure of the opposition? Do you draw parallels with similar events in Ukraine and other post-Soviet countries?

A.P.: Clearly, socio-political activity has decreased – this is reality. Does this remind me of events in Ukraine? Partially, maybe, but now Ukraine has its own history, which in my opinion differs from Russia’s.

A.R.: Yes, there the people in power can be judged in court and even imprisoned – for murder, – and the President himself can be questioned for legal proceedings. Yes, I think in Ukraine things are much better.

After the story with the apartment search and interrogations, you published a ‘zero’ episode of The Term about the materials which were allegedly taken away by the investigators. Despite the humorous appearance on the outside, this episode seems to be bursting with extreme irritation or even aggression, clearly because of the search itself and its unexpectedness. Or was all of it just talented acting?

(Laughing) A.P.: I would like to emphasize that we hired actors for this episode – we hope everyone understood that – no one drank anything, this was a very expensive and highly difficult staged shooting. I am proud that we found actors who look very much like Rastorguyev and Kostomarov; they will be popular one day.

P.K.: “No animals were harmed in the making of this film.” We forgot to add this caption.

After the search, did you feel threatened or excited? Do you ever experience bouts of self-censorship?

A.P: We have terrible fits of excitement, which evolve into panicked self-censorship. (Laughing)