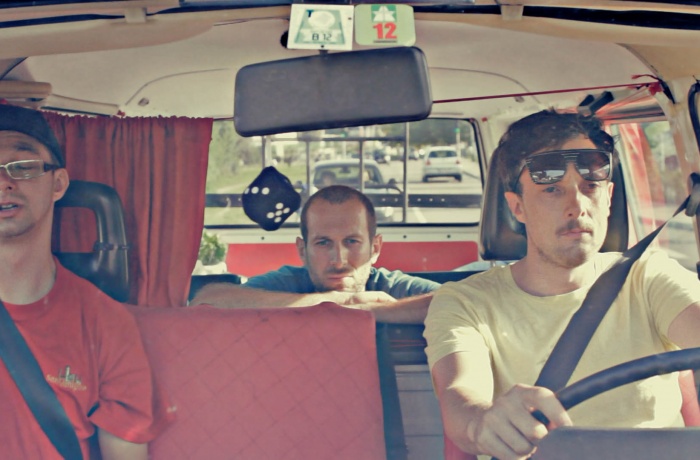 Program of the powerful festival winners DOCU/BEST opens March 22 with the screening and Q&A with the director of the film The Special Need (Kinopanorama, The Big Hall, 8:30 p.m.). Read the review by film critic Oleksandr Husiev to find out more about the films featured in the program.

Although the ‘Festival of Festivals’ format which shapes our new program does not imply a thematic concept, most of the films included in the selection of award winners from prestigious festivals’ appear paradoxically to be topical for our social and cultural context.

The events in Joshua Oppenheimer’s The Act of Killing (which has received a BAFTA Award for Best Documentary and an Academy Award nomination, to name just a few) sometimes resemble a nightmare or an absurd, unconvincing example of the dystopian genre. Ex-agents of the Indonesian special service and members of criminal groups which participated in the extermination of hundreds of thousands of fellow citizens back in the 1960s for the sake of combating Communism accept the filmmakers’ proposal to make a fiction film dedicated to their struggle with “red scum”. In front of the camera they enthusiastically recreate the events that happened fifty years ago, portraying both the executioners and their own victims, while in between shootings they recall their deeds with laughter. The crowd is made up of regular civilians; after the call “cut!”, they hug the death squad veterans who have just reenacted their massacre.

The film looks like a terrible freak show or a trash horror movie about an exotic dictatorship; it is full of the self-satisfied sadism of murderers who haven’t repented and haven’t been punished, as well as the servility of victims who haven’t been avenged and don’t seek vengeance themselves. But it is hard to shake off the idea that this is exactly the kind of film that could have been made by our homegrown special servicemen, along with those who continue to carry the portraits of great murderers on their holidays, and those who complain that the ‘fascist’ participants of Euromaidan were not dealt with violently enough.

Aliona Polunina’s Nepal Forever (the Rome Film Festival’s Cinema XXI Award; Polunina’s other work The Revolution That Wasn't, a notorious film about the National Bolsheviks, won the main prize at f Docudays UA in 2009) also records the characters’ documented performance acted out at the director’s request. Sergei Malinkovich, the leader of the political party The Communists of Petersburg and the Leningrad Region (which he himself called “the second most important Communist party of Russia”) and his comrade Viktor Perov are concerned about the destiny of Nepal’s revolution due to the confrontation of the local Communist parties, (Marxist-Leninist and Maoist), and decide to go to Nepal to facilitate their reconciliation. Pretending to be the spokesmen of the Russian left-wing movement, the CPLR members of CPLR the headquarters of the Communist organizations, listen to the confused explanations of the political situation, and offer their advice in awful English to the Nepalese comrades, exhorting the pacifistic Marxists-Leninists to follow the peaceful way to Socialism, and the militant Maoists – to make the people’s war for the righteous cause.

The characters’ trivial phrases about class struggle and world revolution sound as meaningless in modern Nepal as they do in the post-Soviet space where ‘the Communists of Petersburg’ also pose as serious politicians. In their clownish pointed helmets and red mantles, the self-confident and ironic Malinkovich who vigorously shouts the slogans, and the clumsy, simple-minded Perov who muddlers up the lyrics of the Internationale, resemble either Ostap Bender and Shura Balaganov pretending to be Communist activists, or moving madmen with their minds conserved in a world of hoary propaganda, or satirists playing the fool in the Socialist-Art style. It is as difficult to understand their real motives and convictions as it is to learn the reasons pushing our fellow citizens to pontificate about “the Western imperialist-funded nationalistic rat race”.

Mahdi Fleifel’s A World Not Ours (Audience Award at the Sarajevo IFF and Silver Apricot Award for Best Documentary at the Yerevan IFF, among many others) shows another strange distant place – Ain el-Hilweh, a Palestinian refugee camp in Lebanon. The director, a native of the camp and now a Danish citizen, who is coming to visit his relatives and friends with a mixed feeling of nostalgia and guilt, manages to show the peculiar appeal of this place where a person can be killed anytime for any reason – for example, for their employment in an Israeli company or their support of a different team during the World Football Cup – those happy weeks that, in the words of Fleifel, turn the dispossessed castaways of Ain el-Hilweh, who were destined to stay in the camp until the end of their lives, into Italians, Germans and Brazilians.

With gentle irony Fleifel tells about his childish perception of the camp as an everlasting Disneyland where adult life is just a continuation of war games, when boys swap their toy guns for the real ones when they grow up. Ain el-Hilweh, with its dirty alleys and rooms hung with Arafat’s portraits and Kalashnikovs, no longer reminds him of Disneyland, but he gives his due to the tragedy of its residents, their endurance and desire for revenge, which they keep in their hearts even when their hope for a better life is lost.

The director’s relatives and friends speak about their personal dramas, a series of murders, tortures and detentions which have changed nothing and have made no difference for the Palestinian people. In some magical way, A World Not Ours shows a people used to the state of permanent war, who either hatch plans “how to make the next campaign bring about the end of Israel” or consider that their troubles are caused not by the Israelis but by their own corrupt, lying leaders who maintain them as uneducated, deprived soldiers, the obedient executors of someone else’s will. It shows a life full of hatred and mutual support, a life filled with the atmosphere of idleness and despair, the kind of life that the director himself would have been condemned to if his family hadn’t had the chance to leave for Denmark.

Ilian Metev’s Sophia's Last Ambulance (Award for Best Documentary at the Karlovy Vary IFF, and the Cannes Directors' Fortnight), on the other hand, shows a reality not too different from that of Ukraine. The film is about an ambulance crew that may not be the last one, but is one of just a dozen or so left in the Bulgarian capital.

The camera hardly ever leaves the ambulance car, focusing on the faces of the doctor, the medical assistant and the driver, but their conversations add up to a large-scale picture of the daily routine of the health workers who do their duty in nearly post-apocalyptic circumstances. The doctors of Sofia work within a degraded state system, when the representatives of the most important professions turn out to be the most disadvantaged groups that are forced to change jobs at the first opportunity, giving way to know-nothings. Talks about overcrowded hospitals, colleagues who resigned and managed to find places in private organizations or leave for foreign hot spots to make a living, are intertwined with discussions of personal troubles, and arguments about the houses and travel they could afford if they were getting decent salaries. What makes this job so challenging is not providing the medical aid itself but the search for call sites lost in the suburban solitude, the transportation of patients who suffer from being driven on the broken roads, exhausting, exacting and thankless arguments with the patients and their families, while always being assured of the medical workers’ negligence.

Carlo Zoratti’s film The Special Need (first prize at the International Leipzig Festival for Documentary and Animated Film) addresses universal topics independent of social context, although at first it seems to be a report from a different, better world, where society is concerned about the personal happiness of each citizen. Thanks to the caring and loving people around him, 28-year-old autistic Enea lives quite a full life. But he still hasn’t found the girl of his dreams (ideally, a busty blue-eyed blonde).

Since finding such true love does not seem realistic for the time being, Enea’s friends bring him to a brothel. When the adventure fails because of Enea’s shyness, they go to a special boarding house where mentally challenged people are introduced to sex. But Enea doesn’t go all the way in his interaction with the female workers in this peculiar social institution, telling his friends that he sees no point in it since none of them will become his life partner.

At a certain point this drama of a disabled person in need of normal sex life becomes a metaphor of the frustrations in love of every human being. Enea’s desperate and awkward search for ideal love differs from ours only in its more explicit display of embarrassment, vulnerability and aggrieved pride, while the distinction between love and physical intimacy seems even more obvious for him than it is for his friends.

The film’s most humiliating episode is a scene in the boarding house where they explain to Enea that his dreams about a blue-eyed blonde are never to come true. These gentle persuasions, truisms about the need to align one’s wishes with one’s abilities, about the not-so-attractive but more decent and accessible women stun not only Enea but also his friends, whose darkening faces reveal their awareness that love is the art of the possible.