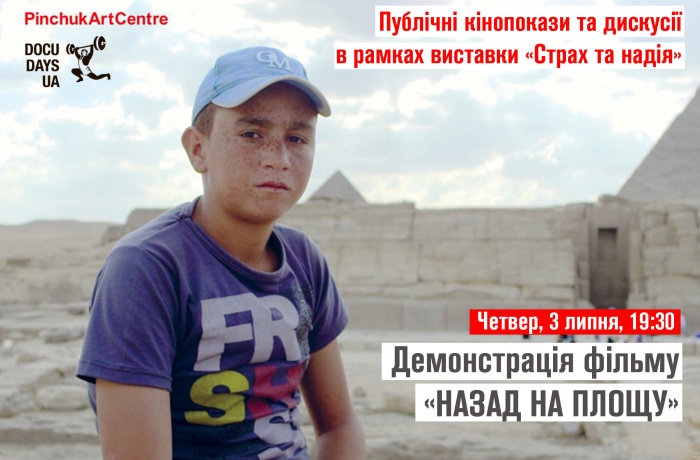 From 3 July until end of August 2014, the PinchukArtCentre and Docudays UA International Human Rights Documentary Film Festival, supported by the National Oleksandr Dovzhenko Centre, invite to attend a lineup of public film screenings and discussions that will be held as part of “Fear and Hope” show - a group exhibition of three Ukrainian artists Nikita Kadan, Zhanna Kadyrova and Artem Volokitin. All events will be taking place at the PinchukArtCentre. Participation is free.

“Fear and Hope” is an urgent artistic response to the new sociopolitical context of Ukraine formed by recent events in the country and ongoing crisis. Art works presented within the exhibition cover topics of memory, nostalgia and history, heritage and the role of media in the modern world, thus creating a platform for discussions that go beyond visual arts.

Public film screenings will help reveal the theme of the exhibition in a broader historical context, referring the viewer to the recent past Ukraine and going beyond a purely domestic background. Screenings will be followed by discussions featuring artists, critics, historians, theorists, political scientists, composers and etc.

On Thursday, 3 July, at 19:30 there will be screening of Back to the Square documentary. Together with the film director Petr Lom viewers will follow five people who have suffered injustice at the hands of the current post-revolutionary military regime in Egypt. Back to the Square It shows how the systematic use of violence and fear by Mubarak’s regime has continued essentially unchanged after the revolution. More than 12,000 protesters have been arrested by the army and secret police, sentenced by summary military tribunals, and often tortured. Shooting in Egypt since the very beginning of the revolution in January, the creative team of Back to the Square has been inspired by this unprecedented Arab Spring. One year later, we are outraged by daily stories of ongoing basic human rights violations in Egypt.

Due to a limited number of seats, participation is subject to advance registration. Please call +380 44 590 08 58. Event participants enter the art centre without queuing.

Information for the Mass Media

Requests for photo and video accreditation must be sent to press@pinchukartcentre.org

Documentary Back to the Square

Documentaries Pussy VS Putin and From Iran, a Separation

Discussion “Behind the scenes of revolution: creation of a myth” featuring art critic and curator Natalia Chermalykh

Discussion with the documentary makers.

*The schedule may be subject to changes. Please follow the events calendar at  www.pinchukartcentre.org

PinchukArtCentre is the largest and most dynamic private contemporary art centre in Central and Eastern Europe.  As a project of the Victor Pinchuk Foundation, it is dedicated to fostering artistic education, creation and appreciation in Ukraine. It provides a sustainable contribution to the cultural participation and emancipation of Ukrainian art and society. It also gives a significant contribution to the cultural dialogue between East and West, and between national identity and international challenge. Recent events have included personal exhibitions by Jeff Wall, Gary Hume, Olafur Eliasson, Candice Breitz, Damian Ortega, Sergey Bratkov, Subodh Gupta, Damien Hirst, Anish Kapoor, and others. The art centre has founded Prizes to support national and international young artists up to 35.

The PinchukArtCentre represented Ukraine in 2007 and 2009 at the Venice Biennale organizing the official Ukrainian Pavilion as well as with Future Generation Art Prize@Venice exhibitions in 2011 and 2013 as part of the Collateral events of the Venice Biennale.