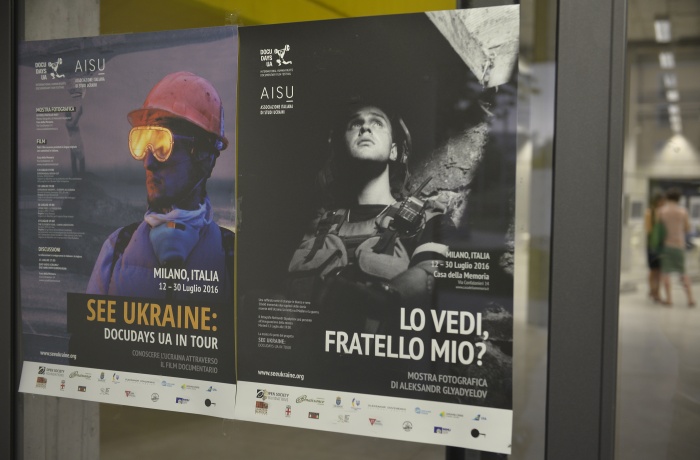 At the beginning of 2016 Docudays UA has started See Ukraine european tour. This cultural diplomacy project has already visited Paris, Athens and just came back from Milan where the festival lasted from 12 to 30 of July. Yaryna Grusha, our Italian project coordinator, tells about the reception of Ukrainian documentary films and photographs in Milan.

To begin with, Italy is a country where Veneto region has recognized Crimea as Russian territory, and similar application is already filed to the Regional Council of Lombardy region. You can hear Russian language at the most famous boutique streets (it has become less often in the last two years though). Local busisnessmen are complaining about damage caused by the economic sanctions. But Ukrainian diaspora in Italy is almost 1 million people, and we were lucky to have a wonderful location for See Ukraine project - House of Memory dedicated to the victims of nazism and terrorism. Before the project opening we had many warnings about possible pro-Russian provocations. All the exhibitions and screenings were patrolled by local police in civilian clothes to secure safety of our visitors. We were lucky though, and there were no intrusions from unwanted visitors. 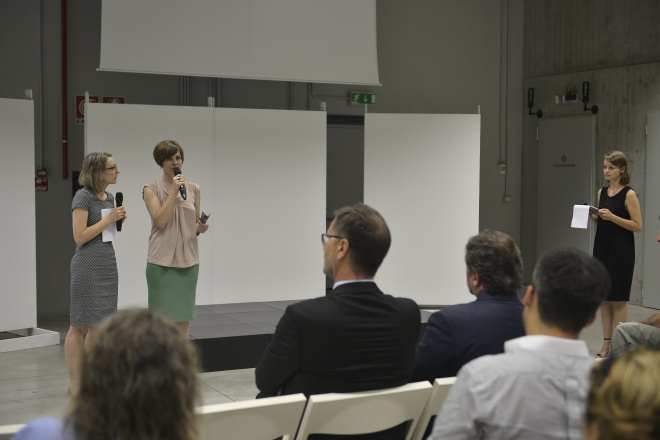 Traditionally for See Ukraine, the festival has started with a photo exhibition of Aleksander Glyadelov. Fourty black and white photos from Maidan and the battle zone in the east of Ukraine showed the revolution and the war in Ukraine, only sporadically covered by Italian mass media. But we should be honest: this topic is uncommon for Italian media not because of the “Hand of Moscow”. Unlike countries with colonial history - Britain and France - local journalists generally don’t pay much attention to international news. Italy is quite traditional and conservative country, and usually sticks to the foreign policy of diplomacy. 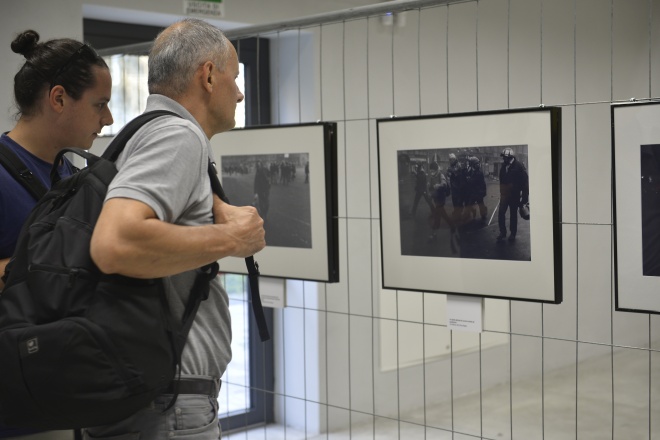 On the next day we invited everyone to discussion “Where are you heading, Ukraine? Two years after the Euromaidan”. With Ukrainian and Italian itellectuals we tried to put back the accents usually lost in the endless information flow. Two young Italians came to listen to the speakers. They plan on going to Ukraine in autumn to start working on their film “Ukrainian youth. What being a young Ukrainian is like”. Later we found out that many Italian directors are interested in Ukraine. Another shooting crew member came to “Euromaidan. Rough cut” screening. They have already received finances to shoot their film “From Lenin to Lennon” about current renaming of the place-names and all the burden of Ukrainian-Soviet past. Participants of the discussion after the screening on Italian side were Barbora Gruden and Valter Padovani, Italian journalists who worked at the Maidan and in Donbass, and producers Julia Serdiukova and Darya Averchenko on Ukrainian side. The discussion turned out to be the most imporant of all the festival talks. To tell the truth, information about Ukraine in Italy is still presented mosly in the political context. 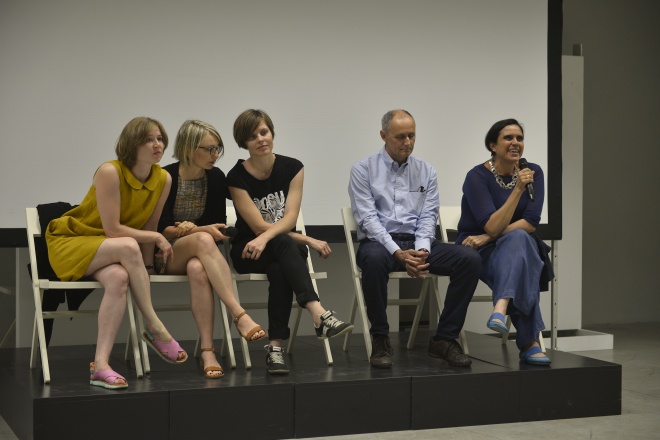 Other screenings focused on political issues only occasionally thanks to Italian and Ukrainian speakers who invited the viewers to talk about things completely new to the local audience. For example, films like “Ukrainian Sheriffs” by Roman Bondarchuk and “The Living Fire” by Ostap Kostiuk provided an opportunity to see the Ukrainian south and west documented with their problems: extinction of the shepherd proffession and organization of the civil order in a remote village. The audience remarkably compared extinction of the sheep breeding in the west of Ukraine with the situation in Italian Alps where cheese manufacture has decreased. 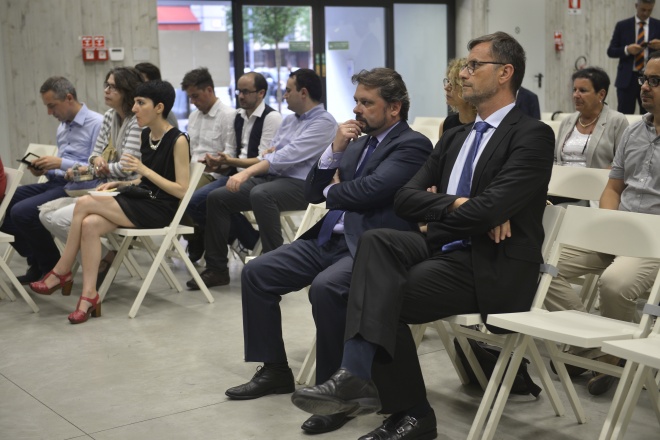 During our European festival tour we usually offer to watch Ukrainian cinema classics, like black and white silent film “The Elleventh Year” by Dzyga Vertov about socialist construction in the Soviet Ukraine of 1920s. Ukrainian composer Anton Baybakov has created an original soundtack that was performed live by the pianist Sofia Turta. On the one hand the film speaks a universal language of industrialization common to many European generations, on the other it shows reality of the country as it was a hundred years ago with the eyes of one of the greatest documentalists. It’s no secret that “The Elleventh Year” is an excellently made agitation where music enables us to see emotional accents so often ignored by our ratio. 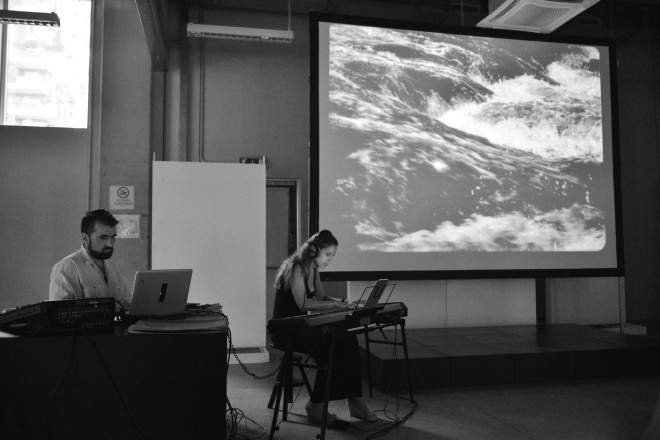 First, the surprising correspondence of main theme with the place of exhibition. There was a simple stand with photos of the fallen Italian resistance fighters glued to it like a mosaic. The exhibition about present Ukrainian struggle for freedom against aggression of the totalitarian neighbour took place in the same space at the House of Memory. It represents very directly and symbolically the continuity of history and our place in it. The second thing is partly connected to the first one. The reaction of members of the organizations located at the House of Memory - the sincerity of it was very important. On the other hand it was a revelation to them as well as to the Milanese who came to see the exhibition how hard this war that Ukraine fights is and how much effort Maidan took. Almost from everyone who shared their impressions with me I heared that the first and perhaps only thing to come in mind in comparison to this was the Second World War.
Darya Averchenko, PR-director Docudays UA, producer:

I'm very happy that our team did the "See Ukraine" project. We couldn't just seat and do nothing while the Kremlin propaganda machine kept working at its full capacity. I presented the screenings of "Ukrainian sheriffs" "Euromaidan" and discussed them with Italians and Ukrainians in Milano. There weren't many viewers. We were glad when a 50 seat hall was full. A tall Italian came to "Ukrainian sheriffs" screening. He rolled his sleeves and showed "UPA" and "Glory to heroes" tattoos on his arms. Our eyes widened.

- That's Max - said Valentina from Lviv who organized a local Maidan to support Kyiv. - Max has been sympathetic to Ukraine from the very beginning. In december 2013 he started spending his days standing near the central railway station wrapped in the Ukrainian flag. He wanted all the passengers to ask themselves: what is that flag? Why is he standing there?
Max didnt have Ukrainian roots or Ukrainian wife, or even close friends there. One day he just read about brave Ukrainians at the Maidan and decided to support them. He impressed me very much. It was an answer to the question, whether it all was for nothing or not. It wasn't. And to be continued!
Ostap Kostyuk, director:
It was an exceptional opportunity to discover such a wonderful city and to introduce our works to people who live here. I sincerely hope that this screening will enable other screenings of the "Living fire" for Italian public. It was a pleasure that the discussion after the screening (Q&A) was moderated by Maria Grazia Bartolini. The "Living fire" creative crew would like to thank her for her deep analysis of the film. It was a pleasure to find a greatful viewer as well as a considerate critic in her expressions. We were also glad to see Ukrainians and Italians at the screening, because we're talking about universal problems that concern many nations. By understanding these common problems we can unite to solve them.

P.S. See Ukraine will visit Gemany and Spain in autumn. Follow the updates at the project’s website.