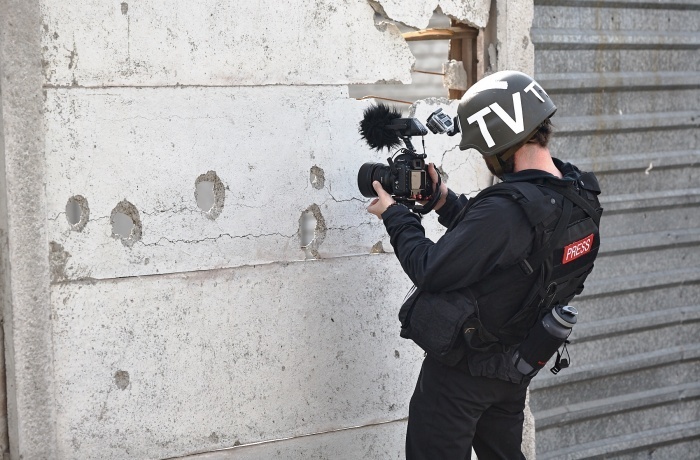 The film follows the events of March-April 2014 on the other side of battle line, in so-called “DNR”. Some of the students among viewers saw “separatist propaganda” in the sequence of events fixed on camera, and left the hall. The incident was spread in mass- and social media with further speculations and now is actively used by pro-Russian media in their fake propaganda.

Due to this, the festival’s Organizing Committee thinks it is necessary to give the following explanations. Docudays UA International Human Rights Documentary Film Festival is not a political festival. We never invite politicians to discussions and other festival events, and for sure don’t participate in propaganda.

The film was approved to participate in DOCU/UKRAINE competition by the festival’s selection committee. It was chosen as the competition’s winner by the independent jury. The program was rated by Olha Reiter, executive director of the Lviv Film Board and co-founder of Wiz-Art art formation; Mélanie de Vocht, member of the selection committee of IDFA festival in Amsterdam and Eero Tammi, critic and cinematographer from Helsinki.

The National Union of Cinematographers of Ukraine gave the following review to the film: “A report film with no particular heroes, it is very hard to perceive, because it shows the world with common sense gone, where the crowd talks with frases learned from Russian television”.

Director Oleksiy Radynsky talks about his film in an interview for “Detektor media”: “When we worked on this film, it seemed like there was no reality as such - only a manipulation, especially in that place. It seemed like manipulation took over the reality”.

The Organizing Committee is convinced that the film transmits no propaganda - it documents the process of seazure of power by the separatists in the east of Ukraine. Just as a documentary film should do, it gives the viewers an opportunity to see the events with their own eyes, make their own conclusions, form their opinions and exchange them with each other.

Starting from October this year, the film-winner of the national program, “People Who Came to Power”, was demonstrated in several Ukrainian cities - Ivano-Frankivsk, Lviv, Ternopil, Sumy and others within the Travelling Docudays UA festival. The discussions took place after screenings. The viewers’ reactions were positive, they reflected on the changes that happened in the east of Ukraine in two years after the shooting of this film and thought about steps we should take to prevent Putin’s propaganda in other regions, as well as actions Ukraine should take towards so-called “DNR” and “LNR”. Regional festival coordinators didn’t invite representatives of any political party to the screenings.

The question is, if there was a presidium of any political party at the screening, who and why singled this “presidium” among the audience, and who invited representatives of the Opposition block (former members of Party of Regions) and of pro-Russian separatist organization “Ukrainian choice” in there - we address these questions to the prorector and to the head of Law department at V. O. Sukhomlynskiy National University of Mykolaiv, who invitied the Travelling festival to the university and presented themselves as the event’s leading organizers.

The festival’s Organizing Committee and all the members of Docudays UA team are very upset about the oppositioners’ attempt to use the Travelling festival. We are going to conduct a thorough investigation of the incident in Mykolaiv and will do everything within our powers to avoid similar incidents in the future.