Audrius Stonis: “You Have To Create Silence" 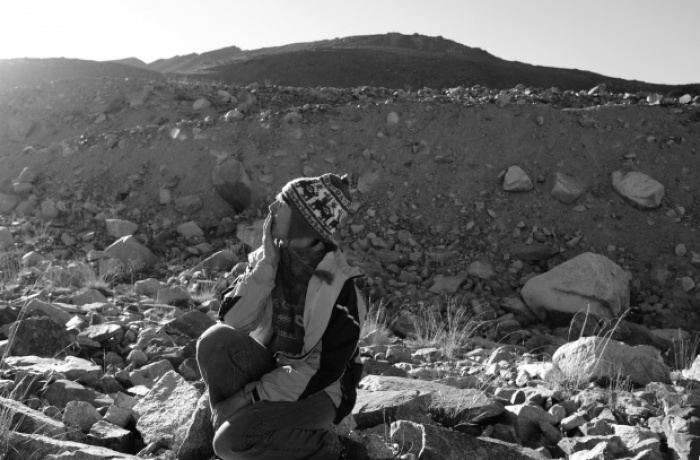 We present to you a live broadcast of our conversation with Audrius Stonis, in which you will hear some striking revelations about his new film, a woman, a glacier, time, another planet and mastery.

There are two characters in the film, and both of them are equally important, equally independent, and both are equally difficult, because approaching a glacier requires great physical and psychological effort, and that is very difficult. It was just as difficult to approach this woman, just as dangerous, and it also required great psychological effort. I cannot say that we conquered the glacier, and after the film, I had to admit to myself that we have not conquered that woman, we have not revealed her character. The glacier remained mysterious, and the woman remained mysterious for us.

When I climbed the mountains, I thought I was climbing up into some kind of new space. It seemed to me that I was on another planet, everything was different, that time there was flowing in a different way. And, of course, it can be explained by the fact that there is 30% less oxygen up there, but still, there is something on the brink of mysticism, some inexplicable things. You lose your sense of time, there are moments when you do not know how long you have been there, for two days or for a week, or maybe for two or ten years already. And there are these moments of inexplicable joy, like the gates of paradise have opened for you, you feel light and you can fly, and there are these down moments, when a dark cloud is coming, it looms over you. All of it is there. You cannot fall asleep for a long time, because you feel like something is standing on your chest and pressing on it. You cannot even fully trust what you see. I went out of the house at night, where you can see the glacier, and I saw moving lights with my own eyes, and even some silhouettes, as if there were people, although I knew for sure that there cannot be anyone there, because it would mean death, anyone who finds themselves on the glacier at night will die, and there definitely wasn’t anyone, but I saw it with my own eyes. And the protagonist has adapted, her body has adjusted itself, she moves around freely. Of course, her skin became rough because of the air, the wind, the cold, and she became different in a way as well. We said among ourselves that her heart had become frozen, you could feel the cold coming from her.

Vast spaces, vast distances, but you never talk loudly there. The cinematographer and I were whispering or speaking in very low voices. It is as if you are in some kind of cathedral, you do not want to speak loudly, you do not want to break the sacred silence. The silence affects you, because there is no life there, no sounds of birds, insects, trees, grass, there is only the mountain silence, the sounds of stones that roll down, the cracking of the ice, the unfamiliar sounds that are difficult to explain.

Silence is one of the key elements in cinema. Not words, but silence. Technically, air silence is not silence, it is just a gap in the soundtrack, so you have to create silence. And when we were working with the Estonian composer Robert Jürjendal, we talked about ways to re-create silence, and we did not discuss the melody, but the visual sequence. I told him how I see the music, talked about the cathedral frozen in the ice, where an organ is playing, and you hear the music in the distance, through the layer of ice, you hear bells.

I wrote the script before I went there. I thought that she, the woman, would tell us about her loneliness, how she lives with this glacier, but it turned out to be completely different, she did not want us to talk. It was not our intention, it just happened that way. And then I realized that the person has lived alone for 30 years, and if she wanted to talk, she would climb down from the mountains and talk.

The idea came when I met a friend of mine who lived in Kazakhstan. He had climbed the glacier, and on his way, he came into the house to warm up, started talking and noticed a Lithuanian accent, so it turned out that this Lithuanian woman had been living there for 30 years with a dog and a cat, in this unreachable place. And that is how I got this dream to go there, I was thinking about it for five years, and in the sixth year I decided to go. The cinematographer and I climbed the mountain and filmed there for three years.

The special episode with flying insects that dance, for me, they are like some kind of elves, mountain spirits. They flew, I don’t know where from or how, and they started dancing in front of the light. It was a miracle for me, because there are no insects there, there is no life at all, I do not know how they ended up there. It seemed to me that they came to dance in front of my camera and disappeared, I never saw them again.

We edited the film with an Estonian editor Mirjam Jegorov, and our editing room was in a monastery, inside a cathedral, in the room above it, in cells where monks used to live. And this cathedral (this place is called Pokuta in Lithuania) is located among fields, forests, there is emptiness, a whole village was moved out from there in Stalin’s times. And so the monks built small houses for themselves around the cathedral, and the cells were left empty, and a friend of mine, a monk, made an editing room there, with sound, computers, displays. So we lived in this cathedral, we had our own cells, we went out for the morning prayer, then we had breakfast, then we edited, went to the river, to the evening prayer, and then to sleep. Time was also different, there was no tiredness. There was harmony, which I think was necessary for this film. It was not like you were running back and forth, editing, and then you do something else, as usual. There was no contact with civilization. There was you, the cathedral, and the film, and that was it.

Screening of "Woman and the Glacier" is scheduled for March 27 at 7 p.m in Kyiv Cinema.