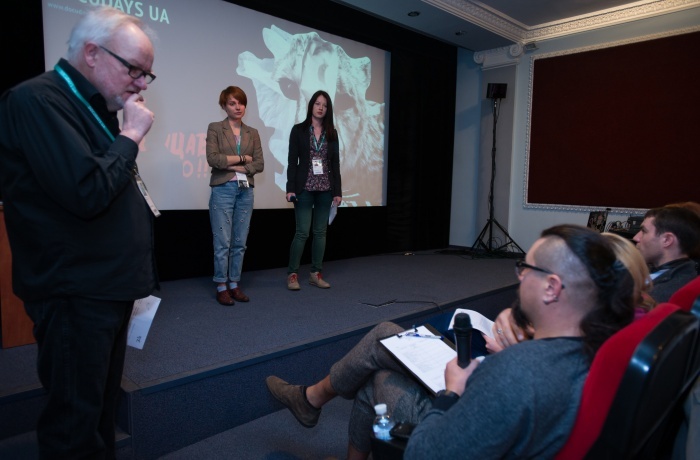 Documentary cinema is capable not only of recording important shifts in the society, but also of catalising change itself. How do you create a film with such potential? How do you make it get through to the audience? The DOCUDAYS UA programme will include an industry platform whose events will be dedicated not just to a theoretical search for answers to these questions, but also to the practical development of documentary filmmaking which would effectively promote positive change in Ukrainian society and beyond.

DOCU/PRO includes a number of events which may be interesting not only for cinema professionals, but also for regular lovers of documentary film. From lectures and creative meetings with famous directors and cinema figures, to masterclasses for producers and pitches for film projects – the industry platform programme will bring together Ukrainian filmmakers, activists and the festival’s international guests.

An important step in this direction will be the B2B Doc: Producers Meet Producers project. The industry event, organised in cooperation between the Baltic to Black Sea Documentary Network and Docudays UA, will aim to create conditions for co-production. Alex Shiriaieff, the project manager of B2B Doc says:

“We can call Docudays UA the birthplace of the Baltic to Black Sea Documentary Network, because it was at this festival that we announced the launch of this project in 2014. B2B Doc is a co-production platform for documentary filmmakers from ten countries: Belarus, Armenia, Georgia, Estonia, Latvia, Lithuania, Moldova, Ukraine, Finland and Sweden. Our goal is to help documentary filmmakers from post-Soviet countries to reach the European funding market by looking for co-production opportunities with experienced producers from Baltic and Nordic countries, as well as from continental Europe.

Clearly, pitching is the main instrument in the film market to introduce those who have an idea to those who are ready to buy ideas. But we think that this format is gradually becoming outdated. So, in our opinion, it is more important to organise meetings for producers. We have selected 14 projects from Belarus, Armenia, Georgia, Moldova and Ukraine to participate in the B2B Doc: Producers Meet Producers. And we have invited experienced producers who work with content from Eastern Europe and who are interested in stories from post-Soviet countries. At the same time, we have also invited decision-makers – that is, the festival will be attended by representatives of film funds, TV channels, film festivals, distributors and sales agents, who will be there to discuss financial matters in case a joint film project is born.”

At 9:30 am on 25 March, in the hall Venice of the hotel Rus (Hospitalna St., 4), the producers will present their projects. The presentations will be open, so everyone will have a chance to learn about documentaries which are being created right now.

Another platform for the productive development of creative collaborations will be the CIVIL PITCH: Civil Activism Films competition project. Within this platform, Ukrainian documentary filmmakers and civil-sector activists will have the opportunity to join forces and create films which will have the potential to promote positive social change. One of the important goals of CIVIL PITCH is to support the development of documentary cinema about topics which, despite being urgent and important, still remain in the shadow in Ukrainian public space. Docudays UA has received around 90 applications for this competition from activists and directors from all over Ukraine, from which we have selected 16 finalists to continue their participation in CIVIL PITCH through several stages. In March, Docudays UA has prepared two workshops for them tutored by well-known directors, producers and festival managers, dedicated to the practical skills of film production, designing effective campaigns for social change and the successful presentation of their work. The festival has invited the Berlin-based director Daniel Abma to tutor at both of these workshops. Last year, Docudays UA viewers had a chance to watch his film Transit Havana, which was shown at more than 50 festivals all over the world.

“I visited Docudays UA several times and I saw good Ukrainian work,” says Daniel. “This time I have the chance to actually meet Ukrainian directors and work with them. Our goal is to inspire them to create new, powerful documentaries on topics which are relevant for Ukraine. During the CIVIL PITCH, directors and activists should join their efforts, share their thoughts and ideas about topics, create teams and start working together on planning their future films. It’s good when there is someone who has experience to define important social topics, and there is someone who has experience to embody a certain story in a film. Together they can create something very powerful. It is like planting seeds at the beginning of the workshops, and in a couple of days there are already green shoots above the ground.”

The next stage will be the final pitch: on 28 March, from 10 am in the Classic Hall of the Zhovten Cinema (26 Kostiantynivska str.), the participants – working teams of directors and activists – will present their projects. The jury, composed of European industry professionals, will determine the winners, who will receive cash prizes to produce their films. Next year, at Docudays UA 2019, we will screen the finished films.

Participants will also have a chance to exchange experiences and establish new connections at another platform of the Docudays UA industry section, the DOCU/CLASS. Its programme includes a whole range of lectures, creative meetings, masterclasses and discussions which will take place every day during the whole festival, starting on 24 March in the Classic Hall of the Zhovten Cinema, between 12 and 5 p.m. Entry to all these events is also free, so everyone who is interested in documentary cinema can participate in professional events.

In particular, at 3 pm on 26 March as a part of DOCU/CLASS there will be a masterclass by Rebecca Ashdown on Impact producing: Creating an effective distribution strategy for a documentary. This meeting will continue the festival’s symbolic search for strategies of creating and distributing films aimed at social change. Rebecca has a lot of experience in this field – it is enough to mention that she was the campaign manager for the distribution of the film No by the famous Chilean director Pablo Larraín in cooperation with Amnesty International. For more than ten years, this British producer has productively collaborated with the British Film Institute, BBC Media Action and the Toronto International Film Festival to help films reach as wide an audience as possible.

The issue of finding effective distribution for documentary cinema will also be addressed by the guests of DOCU/CLASS at a roundtable about the role of television in this process, which is scheduled for 25 March at 3 pm. In the case of documentaries for change, the target audience for such films reaches far beyond film festivals, box office or special screenings. Docudays UA has invited representatives of Ukrainian TV channels and their colleagues from the young media project Current Time, launched by RFE/RL with support from the Voice of America, to discuss the potential of television to support and promote the development of documentary cinema as a driver for change in society. It is also worth noting that this year the independent international news service Current Time will award a special prize to one of the films in the festival competition programme. In addition to the cash prize of $5000, the film’s creative team will receive an offer to broadcast their film on Current Time TV.

As a kind of symbolic closure to the whole process of reaching the audience with a film – from the initial stages of looking for a team of like-minded people and actually creating the film, to production and distribution – the DOCU/CLASS programme on 26 March at 13 pm includes a roundtable with film critics. How should we talk about documentary films? In particular, how should we talk about documentaries for change? Who keeps the ‘right to the story’ which unwraps in such films? Docudays UA has invited film critics from Ukraine, Denmark, Spain and the US to discuss these questions. One of the critics is Lauren Wissot, the executive editor of the Filmmaker and Documentary journals. In her answer to the question about why it is important today to have open discussions about film criticism, Lauren noted:

“In America at least, ‘fake news’ think pieces have been all the rage since Donald Trump took hold of the media spotlight (and never let go), yet far less has been written about questioning the documentary ‘truths’ we see onscreen. While it doesn’t take a genius to spot the alt-right bias in Steve Bannon’s oeuvre [chief executive of Donald Trump's presidential campaign, producer and director on documentaries – ed.], too often subtler – nonpartisan and nonpolitical – filmmaking is simply given an inexplicable pass. This is why the role of documentary film criticism may now be more important than ever.”