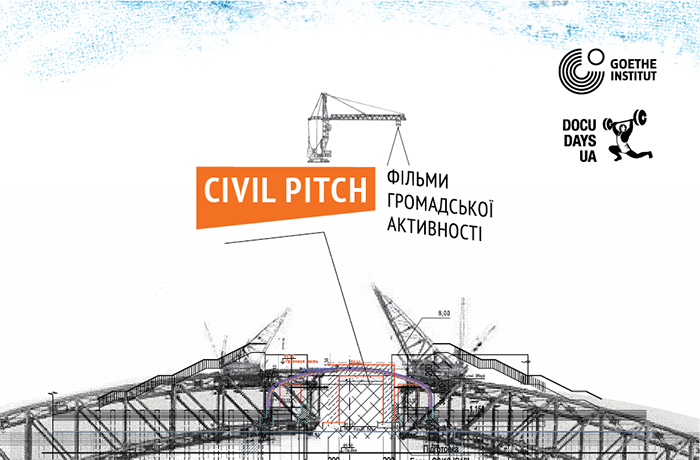 This is a new platform for documentary filmmakers and representatives of the third sector, where they will be able to meet each other and join their knowledge and efforts to create new documentary films which will promote change in the society.

The project’s aim is to create intersectoral connections in order to develop documentary cinema in Ukraine, and to facilitate the production of documentary films on the topics which are important and urgent, but not widely discussed in the Ukrainian society.

Both representatives of the non-governmental sector and film directors want to achieve change in the society, each in their own way. By joining their experience, knowledge and efforts, they will be able to create films on urgent social topics, which would be interesting for a wide audience.

We invite representatives of non-governmental organizations, as well as directors from Ukraine to submit their ideas for documentaries or their projects on the stage of development/early production to the nationwide Ukrainian competition, whose winners will be awarded monetary prizes to produce films.

What kind of projects were invited to participate

3. Projects on the following topics:

- rallying: success stories of people or community organizations from various villages/cities/corners of Ukraine, who united for some good cause or to protect their rights or interests, and achieved the desired result;

1. Representatives of NGOs who are looking for a film crew to create a documentary, and are ready to provide informational and organizational support if the topic corresponds to the NGO’s profile (the festival will help with the search for a director to create a team that will participate in the project).

2. Directors with documentary film projects at the stage of a concept, its development, or early production, who are interested in collaboration with NGOs and look for informational and/or organizational support (the festival will help with the search for an NGO representative to create a team that will participate in the project).

3. Directors who do not have any specific idea for a film, but who are interested in collaboration with NGOs and ready to work with the topic they will be given.

4. Already-formed teams of NGOs + directors, who want to develop their idea for a film The applicants do not have to be professionals in documentary filmmaking. However, some experience in film production is also welcome.

We will select up to 12 projects whose authors will be invited to two workshops in March. One of them will take place during the Docudays UA 2018 festival (March 23-30, 2018).

At the workshops, European and Ukrainian tutors will teach the secrets of effective pitching to the participants. And most importantly, they will explain how a documentary can become an effective instrument in the struggle for concrete changes in the society.

After the workshops, the finalists will pitch their projects to a group of experts. The list of jury members will be announced separately.

The jury will give awards to three winning projects. The competition will provide three prizes for film production, which will be additionally announced by the organizers.

The festival will cover the finalists’ costs of:

- participation in the workshops;

- accreditation to all festival events;

- accommodation and food costs, if the finalists are not residents of Kyiv.

Submissions are closed now! The finalists will be announced on February 26, 2018.

March 10–11, 2018 is the date of the first training, where the finalists will present their projects and participate in workshops on film production and on the use of films for developing efficient campaigns for social change; they will also listen to a lecture on gender equality and non-discrimination. In addition, the goal of this training will be to unite the participants into working teams (NGO representative + director) who will develop and present their projects together from this point on.

March 26–27, 2018 is the date of a two-day workshop where the participants will be taught how to successfully pitch their projects.

March 28 is the day of the pitching. The workshops and the final pitching will be conducted in English (if needed, the participants will be provided with translation).

The winning projects will be announced on March 28, in the evening, at a dedicated ceremony.

The grants will be awarded in Ukrainian Hryvnias. In order to receive the funds, the applicant will have to sign a production contract with Docudays UA. The conditions of the contract will be defined separately by the donor organization within 20 days after the festival ends, based on the stage of development/production of the winning project. The funding for film production will be provided by USAID/ENGAGE (Enhance Non-Governmental Actors and Grassroots Engagement). The organization demands that all the products produced using USAID funds become property of USAID. The winning directors will sign film production contracts with Docudays UA.

In addition to the money for production, they will also receive consulting services from the Docudays UA team free of charge for a year.

The finished films will be screened at Docudays UA-2019.

If you have questions about the program and the application process, please address the program coordinator Darya Bassel, [email protected]

The Goethe-Institut in Ukraine is a cultural institute of the Federal Republic of Germany, which functions across the world. The network of Goethe-Institut branches, Goethe Centers, cultural societies, reading halls, and language learning and testing centers have been the first contact with Germany for many people in more than 90 countries for over sixty years. The Goethe-Institut popularizes the German language abroad and supports international cultural collaboration. It spreads extended knowledge about Germany, informs the world about the cultural, social and political life of the Federal Republic of Germany. The cultural and educational programs of the Goethe-Institut facilitate intercultural dialogue, reinforce the development of civil society structures, and promote global mobility. The key directions of the Institute’s work, particularly in the cultural sphere, are meetings of Ukrainian and German artists and intellectuals, presentation of contemporary German culture, and support for cooperation between Germany and Ukraine in this sphere.

Docudays UA is the only international human rights documentary film festival in Ukraine. It takes place every year in the last week of March in Kyiv. In 2017, the festival screened 94 films from 47 countries of the world. After the end of the festival, Docudays UA traditionally presents the best films in Ukrainian regions in the course of the Traveling Festival. The screenings are held in October through December. The 15th Docudays UA will take place on March 23 to 30 in Kyiv. The festival is non-political and non-commercial.

We thank our partner festival Cinedoc-Tbilisi for inspiration and support in the development of the program. Cinedoc-Tbilisi has successfully organized its Civil Pitch for two years.

The c​ompetition​ ​"CIVIL PITCH: Civil Activism Films"​ ​was conducted as part of the project implemented under the USAID/ENGAGE activity, which is funded by the United States Agency for International Development (USAID) and implemented by Pact. The contents of this [specify] are the sole responsibility of Pact and its implementing partners and do not necessary reflect the views of USAID or the United States Government.