Sonata Žalneravičiūtė: 'A cinema is not just a building' 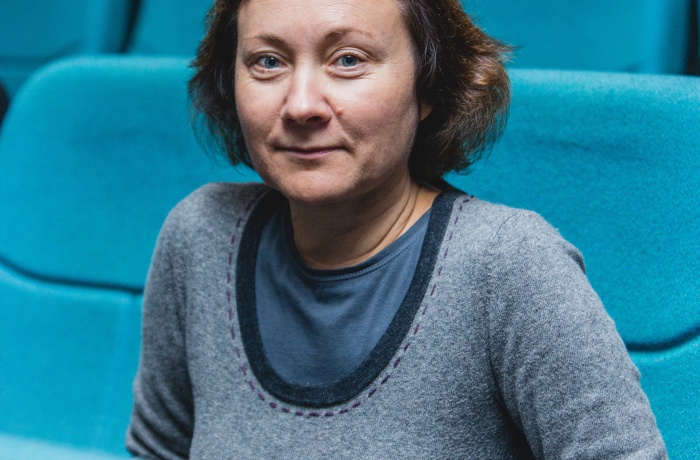 The digital era has brought changes in the status of many institutions, particularly of cinemas. The commercial interests of developers and entrepreneurs on the one hand, and internet-provided informational accessibility on the other, are leading to a situation where the existence of cinemas as cultural institutions now often has to be defended by activists who care about them. In addition, this year’s jury for the international feature-length competition DOCU/WORLD will include the Lithuanian film critic and curator Sonata Žalneravičiūtė, who has firsthand experience in defending cinemas. Before the festival, Olha Sydorushkina, a film critic and curator from Odesa, talked with our guest from Vilnius about fighting for independent cinemas and the fate of film in the age of the internet.

You wrote the book Vilnius Illusion Theatres: Cinemas of the City, and you curate the Skalvija film theatre. Tell us about it.

The Skalvija Cinema is over 50 years old. I have worked there for the past 17 years, and at some point I realised that the city’s residents no longer know its history. It can be forgotten, just like the history of many other cinemas in Vilnius, which once had about 50 of them.

When Lithuania became independent, cinemas started to be privatised. They were replaced with stores, casinos, sometimes with video salons. Only about five of the old cinemas are still functioning. I think something similar has happened in Ukraine. Today, Skalvija is the only art house film theatre in Vilnius that belongs to the city. So it receives annual support from the government, and we do not have to pay rent. However, with every change of the city leadership, the conditions of our existence change, too. We are regularly threatened with privatisation.

And how are the other cinemas shut down?

One example is the biggest cinema in Vilnius, the Lithuania. It was privatised, and then the owners decided to shut it down and sell the building. The community started a long protest: architects, artists and designers constantly did activities in support of the Lithuania. The theatre filled with life. A couple of artists were even filming a documentary about it. Famous filmmakers and cultural figures spoke out in its support. All kinds of activities went on from April till autumn. Some were ironic, such as ‘Dogs Barking at the Sky’, when protesters came with their dogs. But in the end, the cinema was shut down.

I think all the protests should have been organised before the privatization. Then there would have been a chance to change something. The only advantage of this situation is that the Lithuania’s new owners promised they would not just build residential buildings, but also a cultural institution. So now there’s a contemporary art centre in its place, which even has a small cinema hall. For me, it’s a miracle. Usually everything ends with a shopping mall.

You said we needed to prevent the privatisation of cinemas, so that they could be saved. What do you think activists could do to this end?

The most effective thing would be to know the plans of the city administration. To have someone on the inside, who can warn you in time so that the community could start acting beforehand. Not just writing petitions, but also involving artists, politicians, architects, who could always be present and visible. You need to knock on all the doors.

How did you manage to protect the Skalvija?

About 10 years ago, some journalists called me (I was then the cinema’s director) asking for a comment about its privatisation. I told them honestly that I had never heard about it before. We had not been warned. A chain of reports started, I was called into the mayor’s office. In the end we made a deal that we would be warned about any possible change.

The Skalvija is a unique theatre for Vilnius, which almost came to symbolise the city’s support for culture. This helps us. In addition, we are a member of the Europa Cinemas international network of art house cinemas, and we also receive support from them. And we won an award for our 2009 programme, coming first from among over a thousand different European cinemas.

Tell us about your programme.

The Skalvija only has two halls, of which only one is functioning, while the other is under renovation. But we have an extensive educational programme. For 10 years, we have held a film academy for high school students, where they learn how to write screenplays and make short films. On Sundays, we have screenings of the classics, which are always presented by film critics. It’s not easy to organise these screenings, the screening rights cost a lot, but it’s an important part of our mission. We also organize a small documentary film festival ourselves.

Of course, the Skalvija shows commercial films, too, but mostly ones made by independent filmmakers.

What draws people to the cinema the most?

The films. There’s a good example of a Lithuanian documentary about nature called The Ancient Woods (Sengirė), made by the biologist and documentary filmmaker Mindaugas Survila. It’s a personal film: Survila was both its director and the cameraman, he spent 12 years working on this project. The film has no dialogue, no music, no actors and even no voiceover, only the trees, birds and animals. But it was a hit! People brought their families to watch it several times. Of course, advertising did its job, too. But only in the beginning. Then the information is passed by word of mouth, and then it all depends on just the love of the audience.

Are many independent Lithuanian films screened in theatres in Lithuania?

Yes, I’d say that now Lithuanian film is at its peak in terms of popularity. Many good films are made, and they are even shown in multiplexes. People started to believe that Lithuanian films can also be interesting.

Why did that happen?

It may sound ridiculous, but I think that the breakthrough happened when they started to make commercial Lithuanian films. First they were low-quality and looked more like TV series. But there were more and more films, people got used to seeing them in theatres, the quality and diversity of genre improved, and soon the audience for personal films developed, too.

VOD platforms are becoming more popular today. These are websites which allow you to watch films online on demand using special media players. Does this threaten cinemas in any way?

There will always be people who watch films only at home. But there are also many people for whom a film screening is like a ritual: the big screen, the audience response, and so on. I don’t think cinemas are going anywhere. How many times have the theatre and the opera supposedly ‘died’? But nothing of that sort happened in the end.

A cinema is something more than just watching a movie. It’s the atmosphere. People need communication, a place where they don’t just watch a film but also experience an event. A cinema is not just a building, it’s a part of life which stores many memories.