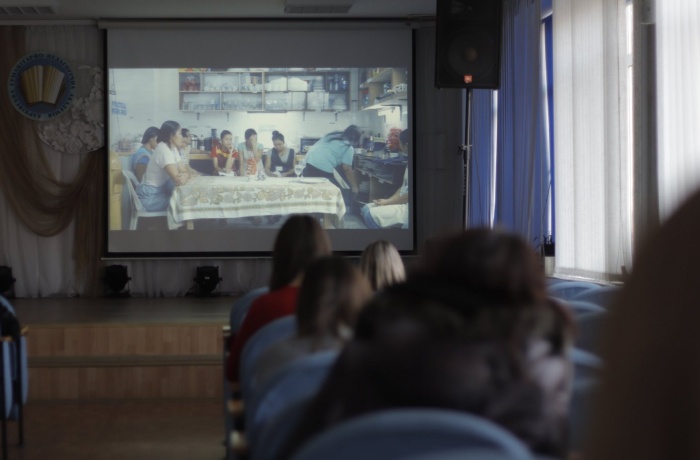 This year, the Team of Travelling Docudays UA was discussing how young people's voices can be heard in public debates, whether we can treat children not only as objects of protection but also as subjects of law. We were trying to understand how, in a situation of armed conflict, the state can fight violence and exploitation of children, implement their rights to education and development, and if the process of growing up is limited to the challenges of adolescence.

The festival started on 4 September in Novomoskovsk, Dnipropetrovsk region with the film Dear Darkness. The open-air screening took place in a park near the Samara River, where the audience watched and discussed films from the DOCU/KIDS programme every Friday for three weeks.

The tradition of open-air film screenings continued with the screening of the film The Good Death on the seafront in Berdyansk. The film was also screened in Boryspil, Chernivtsi, Khmilnyk, Kremenchuk, Ivano-Frankivsk, and other cities. In Lviv, the film launched a discussion on the right to an honorable and painless death. As a part of the discussion researchers Iryna Radiuk and Bozhena Burdio, together with the human rights advocate Yosh considered the legalization of euthanasia and the social problems associated with it. 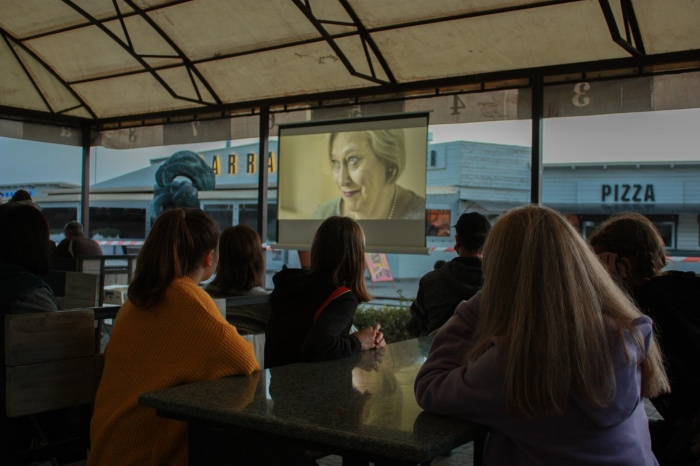 Open-air screening of the film Of Animals and Men in Berdyansk. Photo: Dmytro Polubotok.

The Travelling Festival in Poltava started with a workshop on how to use documentary films as a tool while working with young people. In Ternopil and Mariupol, youth joined a video-making workshop to reflect on everyday life and its problems through the lens of a camera.

The Travelling Festival in Zhytomyr started with the screening of Scheme Birds at the Ukraine Cinema. The story of troubled teenagers from Scotland was relatable to the audience in many cities. The screening took place in Boryspil, Kompaniivka, Ivanivka, Zhytomyr, Ivano-Frankivsk, and other cities.

During the Travelling Docudays UA voice of young people sounded not only from the position of the viewer. During the screening of the film Punks in Lviv, teenagers Karolina and Masha were invited as guests, and teenager Slava was the moderator of the discussion.

The festival in Mariupol began with the screening of the film WAR NOTE which was followed by a presentation and discussion with the director of the film Roman Liubyi at Art Platform TU. The film was also screened in Kherson, Kryvyi Rih, Ivano-Frankivsk, Ternopil, Oleshyn, and other cities.

The Travelling Festival in Vinnytsia Region began with the film Don't Worry, the Doors Will Open. The director of the film Oksana Karpovych joined the presentation and discussion of the film. The student audience of Travelling Docudays UA in Kharkiv made special mention of the film. More feedback from the audience can be found in the report by Hryhorii Kobzar. 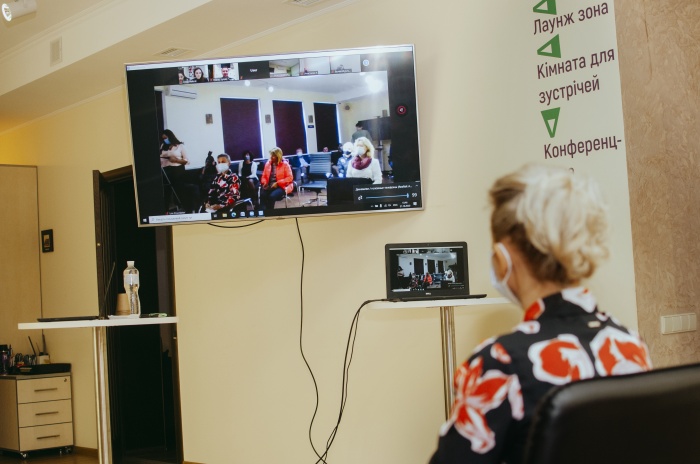 Discussion in a hybrid format after the screening of the film Overseas at Travelling Docudays UA in the Lviv region. Photo: Tatiana Jafarova.

Ukrainian films from the DOCU/SHORT programme became the audience's favourites. Film director Ivanna Prokopchuk, Elias Parvulesko, and Oleksiy Radynski joined the discussions after online screenings in Kirovohrad, Vinnytsia, and Dnipropetrovsk regions. Svitlana Pototska, co-director of the film Zong, who is also engaged in ecological education and nature conservation activities, took part in a discussion about the dangers of building Kakhovka HPP and the destruction of the Kardashian swamp during the Travelling Docudays UA in the Kherson region.

On the occasion of the screening of the film Overseas in the Lviv region, a discussion on the protection of labour rights and eliminating human trafficking took place. Experts discussed the causes and manifestations of violations of labour rights through the prism of the film. 'An informed person is armed and knows how to act in the face of human rights violations', said Tetiana Panasenko, the regional public relations coordinator of the Ukrainian Ombudsman in the Lviv Region.

A round table on gender-based violence was held in Lutsk on the eve of the International Day for the Elimination of Violence against Women. During the discussion, experts spoke about the tools for preventing and responding to domestic violence and the algorithm of actions for victims.

The issues of protection of the rights of the LGBT+ community and counteraction to bullying of community representatives at school were discussed in Kremenchuk. The online format of the discussion provided an opportunity to bring together speakers from Kyiv, Zaporizhia, Kharkiv, and Myrhorod.

Games and quests for young people became another form of interaction at the Travelling Festival this year. In Kremenchuk, during the quest, students checked their schools for accessibility and inclusiveness. In Poltava, they were overcoming stereotypes about gender roles and learned about tools for developing community through playing board games. 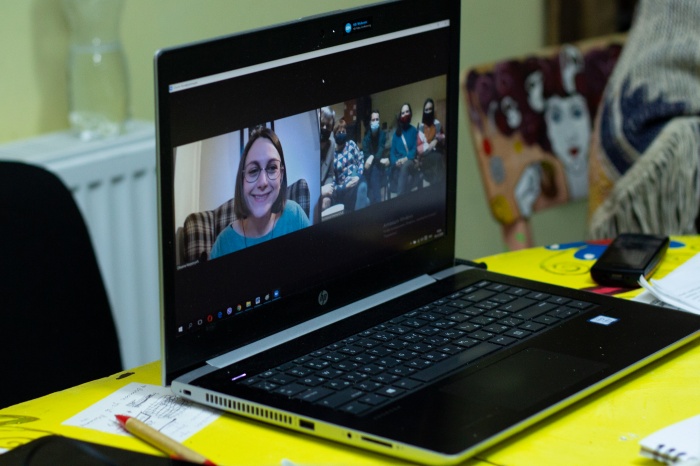 Discussion at the Travelling Docudays UA in Kremenchuk following the screening of the film Don't Worry, The Doors Will Open with the film's director Oksana Karpovych. Photo: Olesya Musienko.

This year, Travelling Docudays UA is in anticipation of adulthood. During the exhibition 'Documentary film is relevant, useful, interesting' in Kompaniivka and Kirovohrad region, we reflected on the road travelled and impact of the festival on the promotion of human rights values ​​among the community of the village.

The impact of modern technologies has become a separate topic within the human rights programme of the Travelling Festival. The pandemic has highlighted the issue of digital security, so the seminars on digital literacy and information hygiene took place during the festival in Sumy, Vinnytsia, and Ivano-Frankivsk regions. 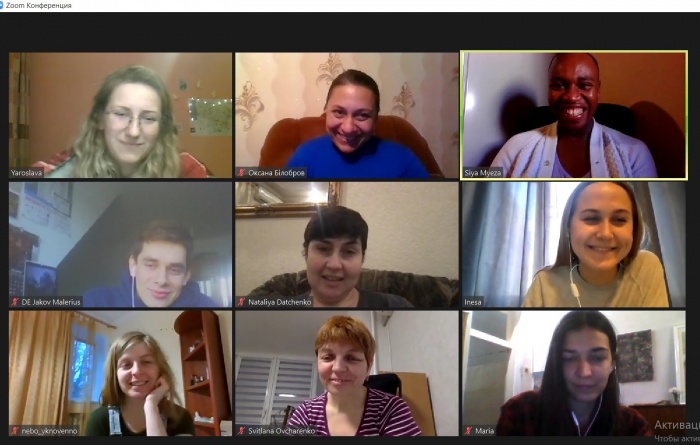 For the first time at the Travelling Docudays UA Living Library was held online. In Uzhhorod, Ivano-Frankivsk, and Kremenchuk, 'readers' had the opportunity to discover the stories of coming-of-age and the fight for human rights in dialogue with 'books.'

The last screenings of the Travelling Docudays UA took place on 30 December. In keeping with the traditions even in the new hybrid festival format, the audience watched and discussed creative documentaries trying to find common ground at a distance. While the modern world is fragile and vague, Docudays UA Team and, in particular, our regional coordinators from the most remote regions of Ukraine made it possible. Each discussion, screening, workshop, or seminar, is another step towards a more just society – free people society. We invite everyone to build it with us at the 18th Docudays UA!

Photo: Screening of the film Overseas at the Kharkiv Humanitarian Pedagogical Academy