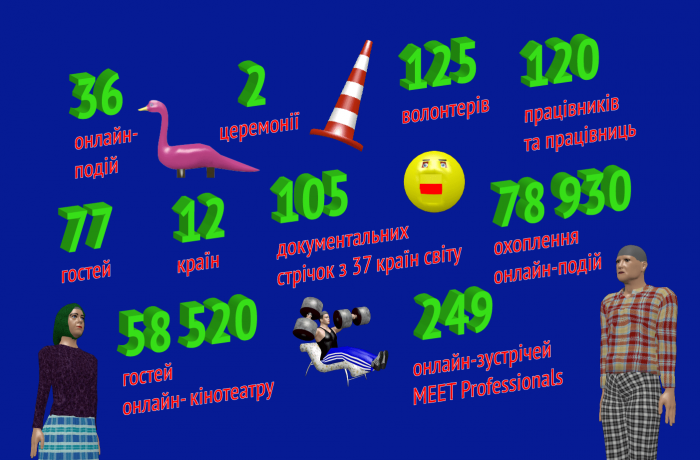 Docudays UA 2021 is over. This year, you could watch festival films on DOCUSPACE for 30 days! For the second time now, we held the festival online, and the audience of Docudays UA included residents of the entire Ukraine. It’s time to sum up the experience, so we’ve collected interesting numbers which will tell you what the 18th Docudays UA was like.

We attended 36 online events and two ceremonies together with you. We also had 27 hours of conversations with the books in our Living Library. We had 77 virtual guests from 12 countries: the UK, Denmark, Canada, Colombia, Poland, the US, France, Ukraine, China, Czech Republic, Slovakia, and Germany.

The online DOCUSPACE platform offered 3969 minutes of relevant documentaries. They were 105 documentary films from 37 countries. The festival films were watched 19,749 times. 78,930 is the coverage of the festival's online events. In total, during the 18th Docudays UA, our online cinema was visited by 58,520 users.

Among the discussions, the most popular one was a conversation from the Rights Now! series on The rights of mothers and fathers in maternity hospitals: Expectations and reality — it was watched 9,737 times. At the Living Library, the highest number of readers came to a conversation with Olena Shevchenko, who is openly lesbian.

This year, we had an extremely powerful DOCU/PRO industry platform. During Meet Professionals, industry pass holders attended 249 individual online meetings where they discussed their projects with 38 international experts in the film industry.

This year, we launched the DOCU/SYNTHESIS interdisciplinary programme at Docudays UA, which uses media art to rethink modernity and the possibilities of documentary filmmaking. We are happy that the online exhibition and the multimedia exhibit were visited by 2,119 users.

We are grateful to everyone who joined the process of creating the online festival. To our team, which includes 120 employees and 125  volunteers who helped make the 18th Docudays UA happen. To our guests, moderators, the authors of the online festival magazine. We thank our viewers who watched the docs and recommended them to their friends, joined online events and wrote about the festival. Docudays UA was mentioned on social media over a thousand times!

Media representatives followed the festival closely and actively reported on it. So now, you can read, watch and listen about the 18th Docudays UA in 329 materials. This number continues to grow.

We appreciate the help of our donors and partners, without which nothing would happen. In particular, the Embassy of Sweden in Ukraine, the Ukrainian Cultural Foundation, the State Film Agency of Ukraine and the Ukrainian Institute.

As we were preparing and holding the festival, we had 772 Zoom calls, got tired enough to drink 1,659 cups of coffee and eat 453 chocolate bars, and saved 5 trees by moving the festival’s traditional publications online.