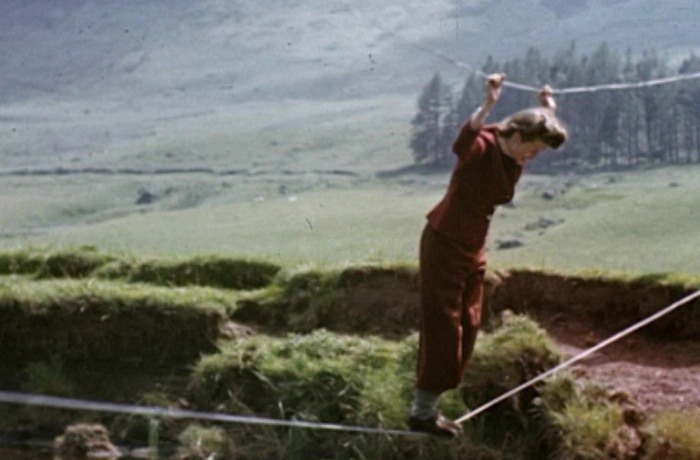 What is the value of amateur cinema? How should we watch amateur films? What is special about this or that movie? This year’s Docudays UA special interactive online programme is dedicated to the amateur cinema of two countries: Scotland, where ‘unofficial‘ films have become an important cultural phenomenon, and Ukraine, where research interest in vernacular cinema has grown over the past few years.

The distances that have emerged in our quarantine life over the past year have exposed our vulnerabilities: the more globalised a certain area is, the greater losses it faces. Cancelled film festivals, closed cinemas, filming put on hold – the global film industry has proved to be very fragile in the new environment. However, numerous particular practices have gained new potential — for instance, vernacular cinema.

From short videos on social networks to meaningful feature films made of private ‘quarantine‘ video logs, amateur videos and films have become an important way to understand the new conditions of everyday life, cope with the tragic challenges of a difficult year, and express support for each other. The small cameras in our gadgets are no longer a novelty, but hardly ever before was the opportunity to take unprofessional pictures of yourself, your relatives and your neighbours such a sensual and powerful way of solidarity.

In October 1960, in an introduction to his traditional Movie Journal column called ‘On Film Troubadours’ in the Village Voice, Jonas Mekas wrote: “Films will soon be made as easily as written poems, and almost as cheaply. They will be made everywhere and by everybody. The empires of professionalism and big budgets are crumbling.” However — almost half a century later — what do we know about amateur cinema?

We usually talk about amateur film as something that loses value outside of a family circle or a circle of friends. It doesn’t matter if these are diary entries or amateur director’s works: such films seem to be pushed to the periphery of the developed industry with its professional education and unions. At the same time, it is amateurism that has historically often been a conscious gesture of resistance to commercialisation, political protest, the struggle for freedom, self-identification, and so on.

The first European filmmaking associations, which began to emerge in the mid-1920s, or the first festivals such as the Scottish Amateur Film Festival, established in 1933, were just like that — disagreeing with the industrialisation of cinema. Magazines and books on amateur filming, convenient and affordable amateur cameras and film stocks began to appear... During the turbulent twentieth century with its tragedy of grand narratives, vernacular cinema became an interesting phenomenon which spoke about historical contexts and expanded the language of cinema no less than the big-screen masterpieces. In this sense, the plots and shooting methods in amateur films are often more important than the frames themselves.

‘Film Troubadours: Scotland and Ukraine’ is a special interactive online programme. On the one hand, it aims to give the floor to amateurs in love with moving images, and to troubadours who sing movies and watch everyday life through the camera lens; and on the other hand, to create an opportunity to comprehend the national stories of the twentieth century through the prism of personal stories. Scotland represents the Western world with its upholding of the right to privacy and freedom of opinion, while Ukraine bears the imprint of a long period spent as a part of the Soviet Union’s totalitarian regime. The first country traces its history of amateur cinema back to the first third of the twentieth century, while the second captures the heyday of amateur cinema in the ‘60s, when the ‘Quartz’ camera hits store shelves. After all, different ideological socio-cultural coordinates determine the excellent, and in their way beautiful national amateur cinematography.

The programme consists of two selections of short documentaries: Scottish and Ukrainian. Both cover the period from the early 1940s in Scotland to the late 1980s in Ukraine, focusing on essential generalisations — techniques and elements typical for Scottish film amateurism, and the evolution of a Ukrainian amateur author, starting from traditional diary entries to poetic statements. Both collections have been co-curated by Docudays UA with two invited curators: Oleksandr Makhanets, the head of the Urban Media Archive of the Centre for Urban History in Lviv, and Annamaria Motrescu-Mayes, the founder of the Amateur Cinema Studies Network, a researcher of vernacular cinema, lecturer, and Proctor of the Clare Hall, University of Cambridge.

For each of the short films selected, we have created interactive subtitles – these are professional commentaries from the invited researchers that will deepen the understanding of the film and its context. While watching the movies from this programme, you will notice the active tags appearing at certain moments of the video. These are the clickable areas that can be either ignored or expanded into a text commentary. The commentaries for Scottish films were developed by Heather Norris Nicholson, an Honorary Fellow of the University of Huddersfield and Manchester Metropolitan University; and Graeme Spurr, a lecturer in Academic Support at London College of Fashion, University of the Arts, London. The Ukrainian films are equipped with exploratory interactive subtitles from curator Oleksandr Makhanets, and a number of films also contain special audio commentaries by the films’ authors.

Main photo and stills from Greg’s Film Tapes and The Coming of the ‘Camerons’.

The programme was created with the support of the British Council in Ukraine and in partnership with the Centre for Urban History of East Central Europe.

___________
The 18 Docudays UA is supported by the Embassy of Sweden in Ukraine, the Ukrainian Cultural Foundation and the State Film Agency of Ukraine.