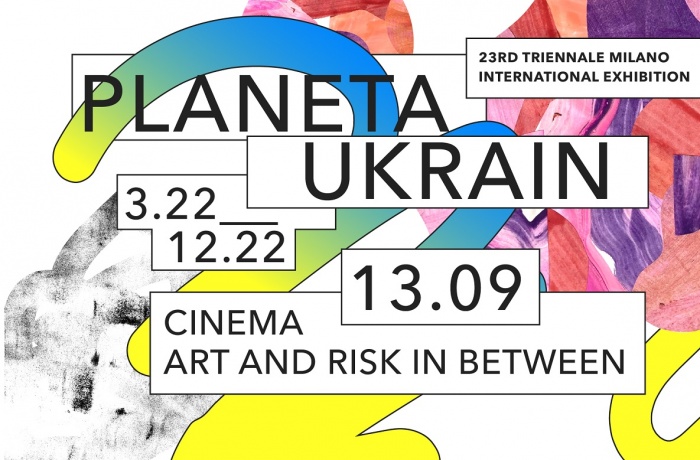 This year, Ukraine is represented for the first time at Triennale Milano, the 23rd international exhibition of architecture, design, and art. As part of the event, a separate pavilion dedicated to Ukrainian art was opened.

Planeta Ukrain is a space for discussion and acquaintance with Ukrainian culture. This is a series of exhibitions, concerts, film screenings, literary readings, and discussions. The multidisciplinary format presents the entire panorama of modern Ukrainian culture in different directions as best as possible, according to the curators of the program. They were actress Lidia Lieberman, pianist Anastasia Stovbyr, and writer Gianluigi Ricuperati. From July 15 to December 11, Triennale guests can get acquainted with artists and their works famous in Ukraine, and now abroad.

"We invite you to meet representatives of a bright, diverse cultural landscape, who have experienced an unprecedented acceleration of their own lives and the national art movement since the end of February. These are some of the best men and women belonging to the modern Ukrainian culture in the field of visual arts, photography, theater, music and cinema, literature and philosophy. They are determined to create and clearly see the future of their cultural heritage, which must be protected and popularized.

During a visit to Ukraine, the curators and I visited Gostomel and places near Bucha, in the Kyiv region. For me, it's still some of the strongest experiences I've ever had. The devastation and pain behind the dozens of lives lost. It is impossible to truly understand the scale and consequences of this war without visiting Ukraine today. We are witnesses and at the same time judges of these crimes against humanity. But no matter how russia tries to deny the existence of Ukrainian identity, no matter how hard it tries to destroy the culture of this people, in fact we see: "Planet Ukraine" is alive more than ever."

Planeta Ukrain occupies three Triennial spaces at once. The central installation in front of the entrance to the pavilion was produced by the artist Nikita Kadan - A Check Point for the President of Planet Earth. The exposition of visual art is continued by the work of other recognized artists - Boris Mikhailov, Yevgenia Belorusets, Oleksandra Anisimova. Exhibitions will continue to run until December 11.

The Art and Risk in Between film program includes Ukrainian films such as "Dixie Land" by Roman Bondarchuk, "Ivan’s Land" by Andrii Lysetskyi, and "The Earth is Blue, as an Orange" by Iryna Tsilyk. This is a documentary triptych about the changing Ukrainian reality and creative people who, despite the risks, create music, art, and cinema. Screenings will take place on September 13th. It is also planned to discuss films with the authors. The program is implemented by film curator Olga Birzul in partnership with the Docudays UA International Human Rights Documentary Film Festival.

The laboratory of the modern Ukrainian opera Opera Aperta is working on the theatrical part of the program. Its founders, composers Roman Gryhoriv and Ilia Razumeiko, will present the archaeological opera Chornobyldorf to Italian viewers on October 22.

The Kyiv Contemporary Music Days team presents Trajectory of [un] known. These are six concerts-researches of works by contemporary Ukrainian composers for solo instruments, contextualized by the music of authors from Italy, USA, Lithuania, Poland, Japan, Finland, France. The concerts will take place on November 12 and 13 at the Triennale Museum's Salone d'Onore.

The Triennial will host an evening of Ukrainian literature on September 27 under the supervision of an actress, Lidia Lieberman. The program includes reading works of the 19th-21st centuries, a meeting with the author of the book "Ask Miechka" Eugenia Kuznetsova, with Italian translators Giovanna Brogi and Lorenzo Pompeo, as well as performing songs.

The children's program Rainbow After the Storm will be held in parallel, with concerts and interactive events for children from Italy and Ukraine. Children will be able to learn about European and Ukrainian contemporary piano music, learn to react to and interact with music through movement, drawing, and animation in the sand. The curator of children's events is Anastasia Stovbyr, who will also play the piano.

The full Triennale Milano program can be found here.

Triennale Milano has been considered one of the leading cultural international events for many years, as it represents the versatility of the modern world through many artistic forms: design, architecture, visual, stage and vocal art. The goal of the Triennale is to try to understand modernity by combining the experience of different cultures and languages in one place. In a place for joint reflection and discussion about a culture that is dynamically developing and offers new meanings and points of view on eternal topics.

The program of the Ukrainian pavilion Planeta Ukrain was created on the initiative of Triennale Milano President Stefano Boeri and curator Gianluigi Ricuperati. The events are co-organized by the State Agency of Ukraine for Arts and Art Education and the Ministry of Culture and Information Policy of Ukraine.